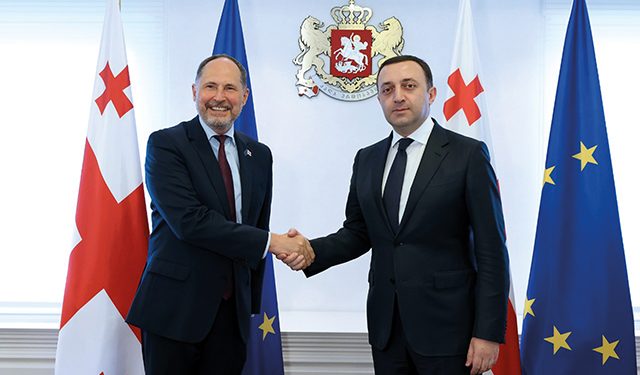 “My message to the Georgians is Gamarjoba. And I’m really happy to be here. I’m really happy to be here in a truly historic moment for Georgia, a moment in which Georgians need to take really decisive steps. And I sincerely hope that those steps will be taken, so that when I leave, in four years’ time, Georgia will be much closer to the European Union, and will be very firmly on the path of European integration, which should translate into a more stable and more prosperous Georgia,” – says Pawel Herczynski*, Ambassador of the European Union to Georgia, appointed in September 2022, his words of optimism kicking off Radio Free Europe’s interview with him.

Just how tough it is, being an EU Ambassador in Georgia?
Let me say in a very open and straightforward way that I was not offered this job, nor appointed to this post: I specifically applied for this job. I competed with many others who wanted this job, and I consider myself the lucky one, because in the end, I got it.

It has always been my dream to represent the European Union in a place where the European Union really matters, and to do it at a moment when things can really change. So the place and the timing is perfect from my point of view, because I really want to be part of a success story, not to be part of a failure of historic proportions. My problem is that, unfortunately, this does not depend on me, and does not depend on the office that I’m heading: It depends on the Georgian political elite. But the moment is now and everything is possible, and I’m here in order to assist, in order to support, and I sincerely hope that things will develop in a positive way.

Your predecessor claimed he became physically exhausted during his time in Georgia because of his involvement in the Georgian political debate. His predecessor hardly ever said anything. So… how’s your health so far?
It’s excellent. I know that my predecessor really wished Georgia well, and he was doing everything he could to assist Georgia. I only arrived two months ago, and I’m full of energy, full of goodwill. And in excellent spirits. Of course, these have been a very busy two months for me. I’ve reached out to all or nearly all interlocutors on the side of the government, on the side of the opposition, on the side of civil society and NGOs, and we are now meeting the business community. We have meetings with think-tanks and academia. So it’s a very busy period. But I’m really excited. And I’m thrilled that I can be part of this amazing journey that Georgia is on now.

Very enviable optimism, if I may say so. You’ve clearly familiarized yourself with the environment here, so, if I were to ask you for one word to describe the Georgian political environment, what word would you choose?
You’re making my job really difficult. Can it be two words? Good, then: Bright future. That’s what I have in mind for Georgia.

What do you see as a major challenge when it comes to Georgia’s European integration? What’s the biggest barrier we have to overcome?
Maybe you’ll be surprised by my answer, but I think that the biggest challenge is to truly believe that this is doable. I have spoken to many interlocutors from the left to the right, and I think that when it comes to strategic objectives, everyone is on precisely the same page.

Strategic objectives meaning what, in this case?
Long-term vision; Georgia’s membership in the European Union. Everybody wants that, but with the European perspective that was granted to Georgia in June, and with the assessment process that will happen next year, the time to act is now. And it’s doable. I think it’s achievable. The window is open. The moment is now. What is needed is all stakeholders, all the political elite in Georgia, working together in order to deliver on the 12 recommendations.

And for the two months that you’ve been here, have you seen any progress on those?
The work is ongoing in the Georgian parliament. Our message to the ruling party is be open, be transparent, be inclusive. Inclusive, here, does not only mean to send an invitation for others to participate, but also to take into account the proposals that are coming from the opposition. And to the opposition, it means stay engaged, be constructive, take part in the exercise for the common good. What is needed now is for everyone to work together to build bridges across the political divide.

Do you see the desire to do that from the parties involved?
I think the desire is there. Because, as I said, everyone, when it comes to the long-term strategic vision, is on exactly the same page. But still, I have to confess it is difficult. And I think it is difficult for everyone to bridge the divisions, to overcome those divisions and to work together for the issue that should be an issue of national priority, European integration.

Is there any sort of strict deadline attached to the recommendations? What happens if we don’t fulfil them in time?
This is a process. Some recommendations will be easier to fulfill than others. What is very important is that we see a very serious approach, a very responsible approach, and a will on the part of everyone to deliver.

When it comes to the concrete timelines for the 12 recommendations, assessment will be done within the so called enlargement package. When it comes to Georgia, it means that in the spring, the European Commission will assess Georgia’s progress in terms of its implementation of reforms. This will be a very heavy exercise, involving all stakeholders. The formal report will most probably be issued around October next year. And then the European leaders, which means the presidents and prime ministers of the 27 Member States, based on the opinion of the Commission, will discuss the issue and maybe suggest further steps. This should happen sometime from October to December next year.

Not much time left, then.
I think there’s a lot of time left. We are talking one year, and one year is a long time in order to prove that you are serious. And as I said, it is doable, you just need to believe in it. All the Georgian political leaders should believe that this is doable. This is achievable. What is needed? Serious work, constructive work on the part of everyone in order to prove that Georgia’s politicians are serious about EU integration. And one year is a long time.

One of your predecessors was complaining about the polarization in Georgian society even some eight years ago. Do you have any visionary idea, from the EU, on how to help Georgia overcome this particular challenge?
Georgians need to help themselves overcome this. What I can say is simply a common sense message: Georgia is not the only polarized country, polarization is part of the normal democratic system. Look at the elections in Brazil, a couple of days ago. Look at the United States, look at most of the countries in Europe, look at my own country. There are very often deep divisions among political parties, and these divisions are part of a normal democratic life. The issue is, however, that on some priorities that are of huge importance, that are of national interest, there is a need to bridge those divisions to work together in order to deliver. And Georgia needs this now, today, in the next weeks and months, because of this unique window of opportunity that has been opened with Georgia being granted European perspective. It might not be open forever. The geopolitical situation is very beneficial to Georgia. And it’s for Georgians to reap the benefits of this geopolitical situation and to act decisively and to act now. It’s for the Georgians to do the homework. No-one can do it for them, and no-one can do it instead of them. It’s for the Georgians to demonstrate that they’re serious.

On the 12 conditions, again: Deoligarchization. The Georgian political actors have no qualms about pointing fingers at each other. Could we bring some clarity into this?
This clarity should be worked out between the Georgians. What we in the EU would like to happen not only in Georgia, but in many countries, and especially in countries that have post-Soviet legacy, is a limit to the excessive influence of rich business people on political life. And, actually, this makes sense not only when it comes to democracy, but also when it comes to a proper business environment. Politics and business should be separated. We are talking about strong state institutions; we are talking about a clean business life; we are talking about fighting corruption, high level corruption. And it is, again, for Georgians to decide how they want to approach this issue. And we as the European Union, are not pushing or trying to impose any model or any solution. It is for all the Georgian political parties to decide how they want to tackle this issue.

***
* Before joining the EU Delegation to Georgia, Ambassador Herczynski was a Managing Director for Common Security and Defense Policy and Crisis Response in the European External Action Service in Brussels. His previous postings include serving as Ambassador of Poland to the EU Political and Security Committee in Brussels, Deputy Permanent Representative of Poland to the United Nations in New York and Deputy Director of the EU Department in the Polish MFA.

Tags: Ambassador of the European Union to GeorgiaPawel Herczynski*
ShareShareTweet