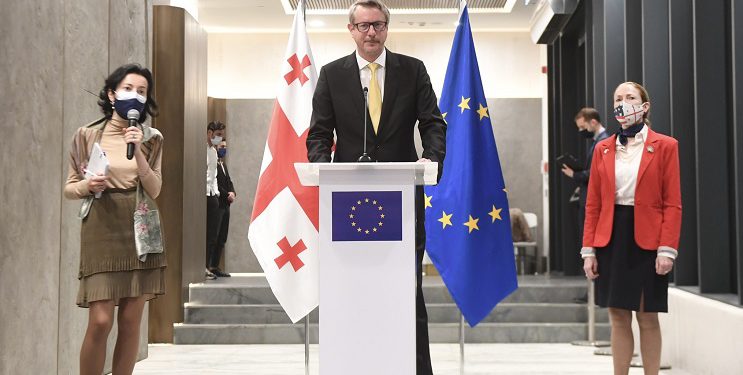 The representative group of ambassadors of the diplomatic corps accredited in Georgia has released a statement regarding the meeting with the Vice Prime Minister and Minister of Foreign Affairs of Georgia David Zalkaliani, saying that grave concerns were expressed at the meeting regarding the reported recent wiretapping by security authorities.

The statement was shared by EU Ambassador to Georgia Carl Hartzell on Twitter.

Statement of the Diplomatic Corps accredited in Georgia regarding the reported recent wiretappings: pic.twitter.com/XZjccYuHhE

“A representative group of ambassadors of the diplomatic corps accredited in Georgia met with His Excellency Mr. David Zalkaliani, Vice Prime Minister and Minister of Foreign Affairs.

“Grave concerns were raised on behalf of the diplomatic corps, about the reported recent wiretapping by security authorities, which constitutes a serious breach of the Vienna Convention on Diplomatic Relations of 1961 and compromises normal diplomatic work in Georgia,” reads the statement.

Files containing covert surveillance and illegal eavesdropping were leaked to the internet recently. According to the materials, the state security officers illegally listened to clergy, journalists, politicians, and foreign diplomats, including the EU Ambassador to Georgia. The Prosecutor’s Office has launched an investigation into the illegal wiretapping.