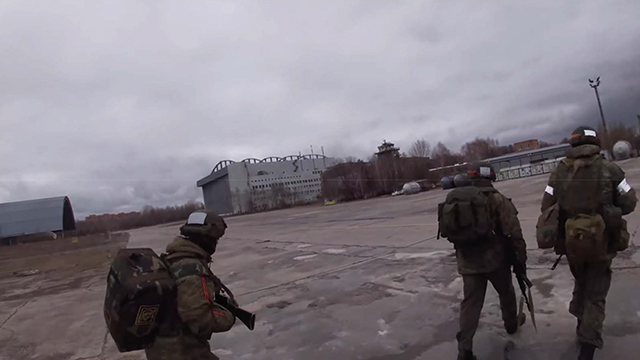 In a recent video of a Russian paratrooper, a member of their famous VDV Airborne force, discusses his predicament in battle with his Ukrainian captors. His experiences during the battle at the airport in Hostomel outside Kyiv paint an interesting tactical picture. We will compare this with the methods NATO forces have used in the Global War on Terror (GWOT), spoken about by a member who served.

While it’s certainly true that the captured soldier is inclined to change the story of events in the presence of his captors, there still lies within a marble of truth. Referred to herein as Nikita, the captured paratrooper describes the operation as more of a training operation that turned wrong. While many have called this a falsity, there is some credibility to his story, as sporadic such claims of Russian soldiers protesting their service in Ukraine have surfaced.

According to Nikita’s testimony, his air assault operation was doomed from the start. Much of the planning for the operation may have led to fellow paratroopers being confused and disoriented when they landed on the ground. Despite being an elite unit, their fate may have been sealed before they even engaged the enemy. We discussed this with a former soldier with combat service and experience in fighting determined foes abroad.

The former NATO soldier we spoke to, who served with the British Army as an infantryman, told us that the captured soldier seems wholly confused about the operation. He explains that the soldier seemed not to have been briefed on the mission and had little to no confidence in his platoon-level leadership. He attributes this to a relic of the Soviet view of warfare.

“I think the Soviet military imagination has been their biggest failing here,” the Brit notes. He says he sees similarities to the Nagorno-Karabakh War between Armenia and Azerbaijan. “The most surprising aspect of this [Ukraine] war has been their apparent inability to learn the lessons of the 2020 conflict between Armenia and Azerbaijan,” he explains, “which is very ironic considering that it was a war that Russia helped to end.” Armenia, being largely trained and supported by Russia, is a microcosm of the larger problem Russia has in Ukraine, despite new equipment.

The British infantryman explains that this soldier is an example of the failure to modernize the warfare ideology, and not just the gear. He says that many in the West, Ukraine included, “seemed to take note of the effectiveness of drones in conventional war, and the fact that conscription-based systems will fail when confronted with trained, briefed, and determined professionals.” He closes by stating succinctly, “Russia’s tactics – like Armenia’s – are demonstrably outdated.”

Many have written critiques about Russian tactics and their usefulness in modern warfare. However, it is particularly interesting to see this from a participant from the Russian side. While it is true that a soldier’s statements in captivity should be taken carefully, there seems to be little reason to doubt the veracity of his statement. This is largely due to the outpouring of after-action reports that came to surface in the wake of the fighting around Kyiv.

Analysis shows that the operation was largely an overambitious attempt at airfield seizure, already a delicate task. In addition to the unpredicted Ukrainian defense strength, it was reported that the CIA alerted Ukraine prior to the invasion of the deep strike Russia was planning. This allowed those defenses to construct barriers and establish fighting positions. This caused the initial air assault to fail, and only when Russian forces could bring armored support from Belarus could the airport be seized.

However, the airfield had been so heavily damaged that it could not be used for its desired purpose of a forward support base. The Atlantic Council, an American think tank, even stated that the defense of the airport and its denied use as a forward supply and operations base caused the mission to take Kyiv to fail. Others have gone on to state that this battle, along with many of the other actions in other parts of the country, have shattered the old image of Russia as a modern and deadly fighting force.

The Russian airborne forces, known in English as the VDV, have historically been a highly prestigious component of the armed forces. Being a paratrooper, even in the Soviet Red Army, held a unique career-critical mention for those members. Their alleged high training standards, specialized equipment, and selective recruitment process all painted this image.

During the fighting in Ukraine now, particularly the VDV action in and around Hostomel, defense experts and analysts are beginning to question their prowess as simple propaganda. While Russian forces are learning from these early faults and engaging with new leadership at the helm, it has yet to see if this is the correction they need.

Authors note: The Video can be found at YouTube via this URL https://www.youtube.com/watch?v=TStvtOgp4ow&t=177s