A MACV-SOG for Georgia? 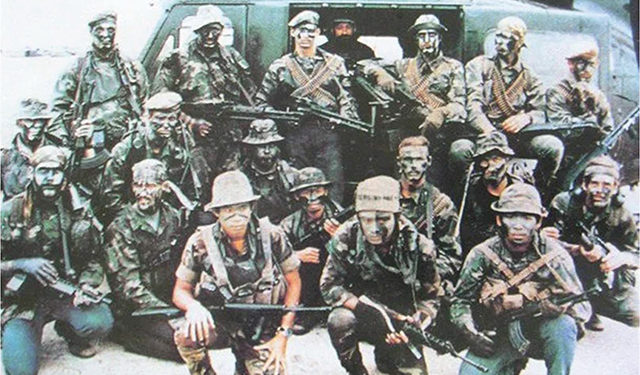 The organization in the United States military formerly known as Military Assistance Command, Vietnam – Studies and Observations Group, or more commonly as MACV-SOG, was a secret and shadowy special operations group. This group operated outside the bounds of the conventional military rules and constraints. In addition to working outside of Vietnam’s national borders, they also worked with local resistance and guerilla groups to fight the VietCong on their unconventional terms, and in their unconventional ways.

Georgia, facing an impending occupation, and indeed their own sovereign territory being held by a foreign force, could learn an interesting tactic from this group. The implementation of a “black” operations force aimed at destabilization of the occupation authority could be the lever to turn the tide in the nation’s favor. Organizing a small, agile, and shadowy force could equally shift the balance of power in the occupied regions, forcing Russian soldiers to rethink their nation’s commitment to such lands.

First, who was the MACV-SOG that seemingly ran amok in the mountains, villages, and jungles of Southeast Asia? This organization was a conglomeration of multiple teams aimed at disruption and terror on the infamous Ho Chi Minh Trail, the supply route of the VietCong and North Vietnamese Army (NVA). This trail extended out of North Vietnam into Laos and Cambodia and back into South Vietnam. Interrupting this would cripple the insurgent’s effort against the South Vietnamese and American forces. Operating in the literal and figurative dark, these small teams, ranging from 1 to 4 US soldiers, would pair with 5 to 30 local fighters and wreak havoc on the supply and reinforcement chain of the enemy.

This top secret organization operated in virtual non-existence as far as the populace and media was concerned. News, foreign elements, and public organizations were told nothing about the existence of their organization. The explicit requirement of the prospective members was that they must have a background in special operations, thus qualifying them for the secrecy of the organization. The unit was focused on special reconnaissance and in certain instances on ambush or Direct Action (DA). Throughout the war, these teams operated in shadowed excellence against the communist threat from the north.
With approximately 20% of the nation’s land being occupied and restricted by Russian forces, a force of similar operational scope could be exceptionally effective in Georgia. Operating in a deniable capacity using asymmetric and unconventional tactics could give Tbilisi more leverage in their Ergneti talks, while leaving room to deny such actions as simple partisan activity or rowdy locals acting out. All the while, these shadow operators would be slowly chiseling away at Russian stability in the region.

One key element of their training would be cross-training with friendly intelligence organizations familiar with the type of operations they will be tasked with, the United States Central Intelligence Agency (CIA), United Kingdom’s Special Intelligence Service (more commonly known as MI6), France’s General Directorate for External Security (or in the French acronym DGSE), and Israel’s now-famous Mossad would be essential partners in the establishment of such an organization.

Their ability to blend into the social fabric in Abkhazia and South Ossetia would be critical. Language and cultural skills, ability to adapt to special weapons, and anonymity would be crucial for the prospective individuals. There can be no way to trace them to Tbilisi, and the candidates would need to be willing to be disavowed upon apprehension, possibly leading to their death. Their overall objective being the sowing of fear and discontent among the occupation forces. This is not just patriotic, but necessary as a nation defending its own.

Duty in this “Studies and Observations Group” would be completely voluntary and of the utmost confidentiality. Their name, rank, personal identification number, and other personal factors would be virtually erased. Any weapon or equipment assigned to them would have manufacturing and serial identifiers removed completely, as well as any additional gear similarly scrubbed. Their new identity would be created to blend in perfectly to their environment; livestock herder, market employee, farmer, etc.

Upon deployment, these individuals would begin the slow and arduous task of raising a band of partisan militia. Through effective information and psychological operations, the local populace would be angled against the occupation forces. The original MACV-SOG would be paired with sympathetic local fighters to combat the enemy, and so would the Georgian operators. Operating completely unaccounted for by the government, they would be responsible for all activity by themselves and their contingent of resistance personnel.

Of course, the legality and international approval of such an organization would come into question. However, it is not the only shadowy element operating in the fringes of diplomacy. Russia has been doing this since the collapse of their last venture, the Soviet Union. Even now, they continue to spread their influence through proxies and covert units, as revealed in various press releases. Why should Georgia abstain from such activity?

Georgia cannot afford to let Russian elements continue the indoctrination of their own people. They will slowly invade the homes and minds of Georgians if left unchecked. Sending their own subtle elements will allow Georgia to keep a firm grip on their own territory, as well as beat back the Moscow-driven threat. Tbilisi needs to support their occupied territories by countering the aggressions and supporting the people as a force for good and giving them confidence that they are not forgotten.