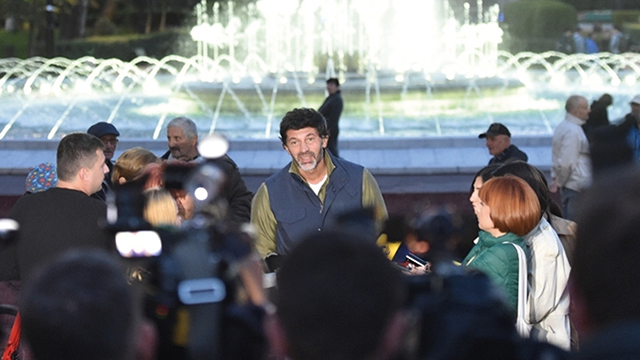 On October 13, in Vake Park, three teenagers had skipped classes to play. Their ball fell into the pool of the newly renovated fountain, which had been officially opened by Tbilisi Mayor Kakha Kaladze just the day before. Andria Lortkifanidze and Lazare Lobzhanidze both went in to try and grab the ball. Both collapsed in the water due to the electric current from an unseen damaged cable. 13-year-old Marita Meparishvili went in after them to pull them out and fell prey to the same current. Devi Mezurnishvili, a Vake Park landscaper of five years, despite feeling the electricity hit his own body hard, managed to pull out the boys, then Marita, all of whom were rushed to hospital.

13-year-old Marita died from the injuries she had received. “The girl was brought in with cardiac arrest and resuscitation measures were unsuccessful,” said the doctor.

Andria and Lazare were discharged from the clinic a few days later.

On October 12, Tbilisi City Hall announced that the rehabilitation of the small cascade and round fountain in Vake Park was officially complete. The water supply system had been completely changed, and modern technology, which is automated, had been installed, along with a lighting system.

Devi Mezurnishvili, the Vake Park landscaper who pulled the three minors from the fountain, spoke of his part in the tragic incident to journalists.

“I was nearby, working. I heard a scream, people asking for help. I went into the water and saw the three children submerged and unconscious. I didn’t realize the water was electrified until I got in. I forced myself closer and almost died there myself to save those children.

“People helped me to get one child out. Then I turned around to approach another. It was slow going. The strength of the electricity wouldn’t let me get close. I was able to get the second boy out. I turned to get the third one and knew time was running out. People were shouting and demanding the fountain be turned off. It was impossible to get to her. I couldn’t reach her.”

He noted that the voltage was particularly strong towards the center of the fountain, exactly where Marita was.

Mezurnishvili added that he gave the children first aid.

“There were a lot of people, and everyone was trying to help. The ambulance came immediately, and they continued to help the three children. They took the girl to the hospital, then I heard that she had died,” he said.

An eyewitness to the incident confirmed that it was difficult to get the teenagers out of the water because “the current was hitting even the man who went in to help them.”

The School?
According to Georgian law, if a student does not show up for school, it is the school’s responsibility to contact the parents and inform them.

“These particular children did not show up for their class in the morning at School 55. As per the regulations that require the tutor to inform the parents about a child’s absence in school, the tutor informed the children’s parents through a chat that the children had not shown up,” said the Deputy Minister of Education, Tamar Makharashvili.

The Mayor?
Tbilisi Mayor Kakha Kaladze stated that all those responsible will be punished.

“It is a horrible fact. We are all saddened. An investigation has been launched, all the relevant agencies are involved and, of course, those responsible will be punished accordingly, within the law,” he said.

When asked if he sees the responsibility of City Hall in the teen’s death, Kaladze said:

Citizens gathered at Tbilisi City Hall, demanding that the Mayor and City Hall take responsibility for the incident.

The opposition and part of society demand political responsibility from Kaladze because he ceremonially opened the fountain just one day before the teenager’s death.

Giorgi Noniashvili, a member of the political opposition party European Georgia, told TV Pirveli, “We all understand that Kakhi Kaladze did not go there and cut the wire himself, but there is a political responsibility.”

The participants of last Thursday’s rally stated their belief that Kaladze sacrificed Marita’s life in “another corrupt scheme.” Participants also blamed him for “wasting the country’s budget in a corrupt way, and constantly threatening the lives of the city’s residents.”

The Contractors?
“13 million was spent on the rehabilitation of the Vake Park fountain. The company that won the tender was Greenservice+, whose head was arrested by Georgian Dream itself in 2013!” the rally organizers pointed out.

The rehabilitation works of the fountain in Vake Park were carried out by the company Greenservice+ on the order of City Hall. In 2022, the company received tenders worth more than 5 million from Tbilisi City Hall alone.

“Due to the tragedy, my deputy is currently under arrest. I, as the head of the service, of course, feel moral responsibility for the official actions of my deputy, of all employees. Therefore, I consider it necessary to leave my position. I will fully cooperate with the investigation in order to establish the truth of what actually happened on the day of this tragedy and to answer all the relevant questions that exist among society,” he said.

The 9 Arrests
On Tuesday, five days after Marita’s death, Kakha Muradashvili, Deputy Head of the Tbilisi Police Department, announced that nine people had been arrested.

Lasha Purtsvanidze , the head of Greenservice+, and the deputy head of the Environmental Protection Service of Tbilisi City Hall are among those arrested.

The Ministry of Internal Affairs launched an investigation under Article 240 prima of the Criminal Code, which refers to the violation of safety rules, which resulted in less serious or serious injury to health. According to the Deputy Minister of Internal Affairs, in the course of ongoing investigative proceedings, the case was re-qualified under Article 240 (1) I and II parts of the Criminal Code of Georgia, which implies a breach of safety regulations at electric facilities that result in death. The committed crime envisions from 4 to 7 years of imprisonment.

“None of those arrested has pleaded guilty, and they are using the right to remain silent. No-one is refusing what is necessary for investigative actions, but they weren’t even expecting to be arrested. At this stage, we do not even know what the accusation is,” Revaz Acharadze, the lawyer of the arrested employees of Greenservice+, told media outlet Interpressnews.ge on Tuesday. “Based on the interests of the defense, I cannot say anything specific, I am waiting for the case materials,” he added.

The Prosecutor’s Office of Georgia filed charges against those persons arrested in the case of the Vake Park tragedy, including the Greenservice+ head Lasha Purtsvanidze and deputy head of Environmental Protection Service of Tbilisi City Hall Giorgi Vakhtangashvili, with facts of official indifference, indifference committed in the enterprise, violation of the safety rules during work which led to the loss of human life, and the facts of making, inciting the making, and using of a false official document.

The Prosecutor’s Office of Georgia expressed its condolences to the family, relatives and friends of Marita Meparishvili due to the gravest tragic incident in Vake Park, and stated.

“At the initial stage of the investigation, charges were filed against the deputy head of Environmental Protection Service of Tbilisi City Hall, the director of Greenservice+ LLC, the contractor of the same company and one employee, the subcontractor firm of Greenservice + LLC – New Metal Design representative, two craftsmen hired by New Metal Design and the director and expert of Mshen-expert LLC.

“Two criminal episodes were identified within the ongoing investigation at the Ministry of Internal Affairs. First: on October 22, 2021, between the Service of Environmental Protection of the City Hall of Tbilisi Municipality and Greenservice+, an agreement on state procurement was signed, the subject of which was the rehabilitation works of fountains and cascades in the area of Vake Park in Tbilisi.

“On August 26, 2022, the parties signed an act of acceptance and handover, by which the Environmental Protection Service of the City Hall accepted the works performed on the central fountain. After this, in September 2022, despite the fact that the rehabilitation works on the central fountain were completed, the deputy head of the Environmental Protection Service of the City Hall, the project manager of Greenservice+ verbally requested that some additional works be carried out on the central fountain, namely wrapping the black water pipes connected to the electric motor with stainless white tin material. The project manager of Greenservice+ informed the director of Greenservice+ about this, and on his instructions, the mentioned work was ordered to the representative of the subcontractor firm New Metal Design. The latter, in turn, assigned the work to two craftsmen hired by New Metal Design. The supervision and control of the work was to be carried out by the contractor of Greenservice+.

“On September 22, in the morning hours, the above-mentioned craftsmen arrived at the central fountain, brought the wrapping tin material and started working on it. In the course of the work, the craftsmen violated the safety norms of the work procedure, in particular, in order to fit the stainless tin on the water pipes, they removed the metal grid for wrapping the electric motor, and when fixing it back, they inserted a high-voltage electric cable between the concrete surface and the metal grid. Because of this, the insulation of the electric cable was damaged and the current leaked into the water.

“The director of Greenservice+ presented the completed work to the City Service without conducting an appropriate inspection, and the deputy head of the Environmental Protection Service of the City Hall accepted the said work without an appropriate inspection. Further, the representative of the subcontractor firm of Greenservice+ did not verify the work performed by the craftsmen hired by them. Meanwhile, the producer of the works of Greenservice+ did not provide appropriate control over the said activity. If the mentioned persons had performed their duties properly, the fact of damage to the electric wire would have been detected and the result would have been avoided,” the Prosecuter’s Office wrote.