6 Steps to Tyranny: How Russia Spreads Its Venom 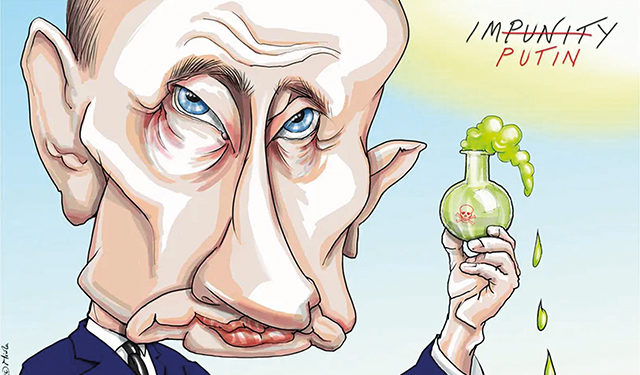 By now, most have seen how Putin’s ilk oozes into his neighbor’s territory, brainwashes the inhabitants, and then creates a frozen conflict to force the oppressed into gridlock. However, not all have closely examined the formula he has created to reclaim old Soviet lands. Close observation of this formula is the first phase of putting a stop to it, and allowing the people to diagnose this spreading “disease” before it takes them.

This process has been played out live in front of Georgians, but also in Ukraine, Moldova, and could possibly be brewing in Azerbaijan and Armenia. These 6 steps focus on information warfare and manipulation, sabotage, false flag operations, and even offensive military operations. The foundation of this is the careful manipulation of media sources and propaganda. While the term “fake news” has been used quite a bit in recent times, sometimes erroneously, it is not a mistake to use this to describe the tactics used by the Kremlin.

Step 1: Conversion of the populace
This first phase often happens without the notice of authorities, the government, or even raising serious concerns among the local population under its effect. Months, or even years, before visible signs of encroachment appear, the people are slowly brought to view the world through a “Russified” lense. Western elements and values are ostracized and made to seem perpendicular to the values and customs of the target populace.

An example of this still being used today is the subtle weaponization of the Church. It’s lost on few that the Orthodox Church is one of the few cultural similarities between the Eastern European world and the Russo-slavic world. This connection is a strong one, tying the two to a shared sense of cultural values and traditional societal standards.

With Georgia, Ukraine, and much of the region becoming more enamored with European inclusion, the Russian propagandists have driven a peculiar wedge in between the two worlds; a distaste for “alternative” lifestyles. The Orthodox Church has been rather open about its disapproval of the LGBT agenda and the influence this has on the culture. Russian information operations have used this to portray NATO and the EU as violators of religious and cultural tradition, even as opposed to the Orthodox model of family and society.

For many, this can be a deal-breaker if it were true. Of course, anyone with experience of living in the West knows the inclusion of others is not the downfall of their society. However, those who have lived their lives in the same small town or village that are told by local authority figures that this will come if they don’t seek the help of the Russian world are easily manipulated.

Step 2: Assisted separation through force
As the populace becomes more discontent with the way they believe their country is going and the morals and traditions at stake, the resistance begins to form. Soon, armed groups are assuming control over police departments, and local leaders that were democratically elected are being ousted and militant leaders are seizing control of village and town centers.

Often these armed groups are not purely composed of local militia members. These groups are bolstered by “volunteers” from neighboring regions or even Russian intelligence and special operations elements themselves. In addition, they are often well armed and funded, more so than any local militia ought to be.
In response to this, the regional and national government will react predictably in an effort to restore order and rule of law. Police, State Security Services, and even military forces are deployed to combat this armed insurrection. In Abkhazia, the Georgian security forces had virtually eliminated this resistance force until Russian troops entered the battlefield.

Step 3: Deployment of a “Peacekeeping” force
Under the guise of peacemaking and protection of an “oppressed” or ethnically Russian people in the region, the Kremlin sends its uniformed regulars to take ground and work bilaterally with irregular units and militias.

This force operates with an aggressive operations tempo and utilizes the full spectrum of armaments available to the Russian Battalion Tactical Groups (BTGs). Naturally, Russia’s technology, particularly after the 2008-2009 military reforms, places them in a much more advantageous position over their opponents.

During this, to keep public opinion behind their soldiers, a structured media campaign both at home and in the region in question is pushed at every level. Russian soldiers are portrayed as bringers of peace and stability, and the aggressor, such as Georgians in South Ossetia, are portrayed as an abusive overlord.

Step 4: Occupation
As the nation’s security forces are defeated on the field by the Russian “peacekeeping” force, fortifications and occupation bases are constructed. The Kremlin forces the nation to the negotiations table while Putin keeps his tactical positions and strength as heavy leverage. These forces are now transitioned administratively to permanent posting in the captured region.

Under this occupation, a complete blackout of free media, free speech, human rights, and freedom of movement is enforced. Knowing that any crack in this facade could spell doom, the occupying forces heavily restrict the flow of information coming in, and out, of the area. This is very visible in Georgia’s occupied territories, where everything from politicians and journalists to medical personnel are virtually barred from accessing Tskhinvali.

What little information does make its way out of these areas is bleak. Basic infrastructure is neglected and human services such as medical and social welfare are almost abandoned. Russia doesn’t actually have any intention of true “liberation”: their real intention is to use these people as tokens of leverage against both the sovereign state that was invaded, and the West as a whole.

Step 5: Not-so-frozen conflict
Many strategic analysts have coined the term “frozen conflict” to refer to Russian occupation operations in Georgia, Ukraine, and Moldova. However, those that live in those areas, as well as the security forces members that are tasked with containment, would say otherwise. Georgian farmers and police are constantly met with encroaching illegal borderization.

Ukrainian soldiers live under constant attack along the occupation line in Donbas. Artillery, sniper, and probing attacks constantly harass the defensive positions Ukraine has held since the war became stagnant, with casualties mounting every month on both sides. This is aimed both as an attempt to slowly erode the confidence of the locals in the government and military, but also as a propaganda tool for the Russians.

In addition, any aggressive response by the sovereign nation is seen by the Russians as an attempt to reclaim their land, and the media is called to paint the enemy as a fascist, anti-Russian, and oppressive regime. Because the Kremlin likes to paint any of those that oppose them as neo-Nazis and fascists, as they did with Pro-Ukrainian protests, as well as the Saakashvili administration, they are able to portray themselves as the “good guy” in the conflict.

Step 6: Absorption
The last step is a long process of annexing the occupied territory and bringing them full circle into the Russian sphere. The population is totally assimilated to become Russian in almost every way. The issuance of passports and legal documents, establishment of an easily manipulated puppet government, and a formal permanent posting of Russian soldiers all culminates in the Kremlin recognizing the occupied region as a free and independent state.

Abkhazia and South Ossetia were recognized by Russia as independent states, something almost the entire world denied. Only Nicaragua, Venezuela, Nauru continue to recognize this, though it’s doubtful this will mean anything for the fledgling regions. Residents in these areas, while living in poverty compared to their Georgian brethren, have been offered Russian citizenship in some cases. Meanwhile, in Crimea, the Russians have simply taken a page from the annexation of Austria and Czechoslovakia by Germany in 1938. Crimea is viewed by Russians as simply Russian in the same way as any other oblast.

In sum, these steps are not meant to be like a recipe that must be followed strictly, but rather a loose guide the Kremlin has used to spread its influence and control through the former Soviet world, particularly with an aim toward the Black Sea. This should stand as a symptom guide, something that must be avoided, for people living within the reach of the Russian bear paw.

Just like any disease or infection, the best remedy is one taken early. When these disinformation campaigns and attempts at driving a wedge between a local populace and their home nation become visible, it is imperative to curb this immediately. Allowing the Russians to create this open wound lets them begin to fester and spread their decay through the host nation’s body. State Security Services, government representatives, and even local and regional police members must have this in their training. People living in these areas must be informed and taught how to identify this tactic, and how to stop it before it even begins. Ultimately, it is the duty of every citizen to be the first line of defense against Putin’s spreading pandemic of destruction.