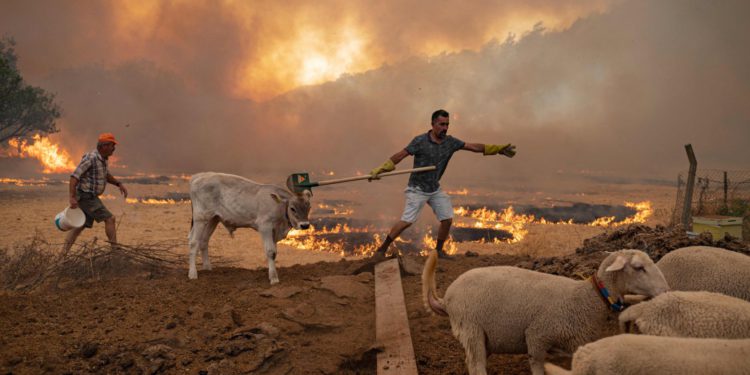 Large-scale fires in the Mugla and Antalya regions have yet to be extinguished.

It is said that now the production of olives, honey and many fruits and vegetables is at risk.

“As of Tuesday, only 13 wildfires remain out of dozens as firefighters in six provinces have worked since last Wednesday to extinguish the blazes. The worst fires in terms of size and speed are in the Manavgat and Gündoğmuş districts of southern Antalya and in the Marmaris and Milas districts of southwestern Muğla,” reports the Daily Sabah.

The edition says that, based on the preliminary assessment of the Agriculture and Forestry Ministry, the wildfires in the last five days left the honey production significantly at risk in Muğla, since some 80% of the region, which is home to 45% of Turkey’s total bee breeding business, was burned to ashes.

Mutlu Ayhan, Chairperson of the Marmaris Chamber of Commerce, said that an area of 8,000-8,500 hectares has been destroyed.

“More than 300 cattle, around 3,000 sheep and goats, nearly 4,000 poultry animals and some 400 beehives were destroyed in the fire. Meanwhile, Ali Çandar, chairperson of Antalya Commodity Exchange, said feed and straw aid has come from exchanges in various parts of the country to be delivered to the farmers,” reads the article.

Reportedly, currently, some 16 planes – including those that came to Turkey’s aid – and 51 helicopters are tackling the blazes across the swathe of southwest Turkey. The EU said it mobilized firefighting planes from Croatia and Spain to help Turkey. Planes from Ukraine, Russia, Azerbaijan and Iran have also been fighting the blazes. Spain said it was sending two water-dumping aircraft and one transport plane as well as 27 soldiers to help.

8 people have been killed in the wildfires. Residents and tourists have fled the most beautiful and famous vacation resorts of Turkey.