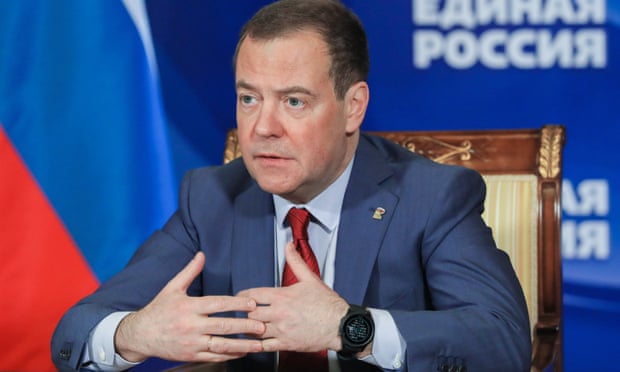 Georgian politicians have responded to the statement made by Dmitry Medvedev, the former president of Russia, regarding the country’s Russian-occupied territories, claiming that “Georgia can only be united as part of Russia.”

They say that the above statement can be perceived as a “warning” and a possible danger for the country.

“Medvedev’s statement was a warning for Georgia – instead of actively cooperating with the Western world and receiving appropriate guarantees, on the contrary, they have strengthened anti-Western campaign,” National Movement MP Levan Bezhashvili said.

He claimed the statement was intentionally spread.

“The website of the head of the Security Council cannot be easily hacked. This was a deliberate statement and a warning for Georgia, Kazakhstan and the entire progressive world about their real plans. These plans are not new. The main thing here is how prepared the country is to deal with such threats. Instead of actively cooperating with the Western world and receiving appropriate guarantees, on the contrary, Georgian Dream has strengthened the anti-Western campaign, which increases these threats even more,” said Bezhashvili.

“We know that a statement was made that Medvedev’s page was hacked – I don’t know whether it was hacked or he was drunk when he wrote it, or something else, maybe someone really hacked it, but the point is that what is written in this statement, has been said by Putin, Medvedev and their propaganda before, at different stages,” said the Chairman of European Georgia, Giga Bokeria.

“I repeat once again, this statement, be it fake or not, summarizes everything. In fact, this is the spirit of Putin’s regime and this is a threat to the freedom and existence of our country, as well as other neighbors and countries of the free world.

“There is nothing new in this. It was the same before the aggression in Ukraine. Their propaganda has been saying this for years – that we don’t exist. Not long ago, Defense Minister Shoigu said that the Soviet Union would be restored,” Bokeria said.

“Medvedev is not only a former president, he is a high-ranking official. I want to ask Kobakhidze a question – don’t you have any questions or opinions regarding the Russian Government?!” – Giorgi Vashadze, Chairman of Strategy Builder stated when responding to the statement.

“No-one has hacked anything, this is Medvedev’s personal position and not only his. This is Russia’s attitude towards Georgia as a whole. Russia does not recognize Georgia or other countries as states. If we do not understand this well, if we do not understand how dangerous this is, we will not be able to move forward. That’s why I have a question for Georgian Dream. What do they think about the Russian Government? Don’t they have questions regarding the Russian Government?! Medvedev is not only the former president, he is a very high official in the Russian Federation. He made a statement and thus tried to falsify history and humiliate the Georgian people”, said Giorgi Vashadze.

A statement was posted on Dmitry Medvedev’s page concerning Russia’s imperialist views, saying that after the return of Kyiv, Russia would restore its borders, for the expansion of which it had been shedding blood for years. Later, the post was deleted, and Medvedev’s assistant Oleg Osipov said that Medvedev’s page in the VKontakte social network had been hacked. The statement mentioned Georgia as well, saying that before the accession of Georgia, it did not exist at all.