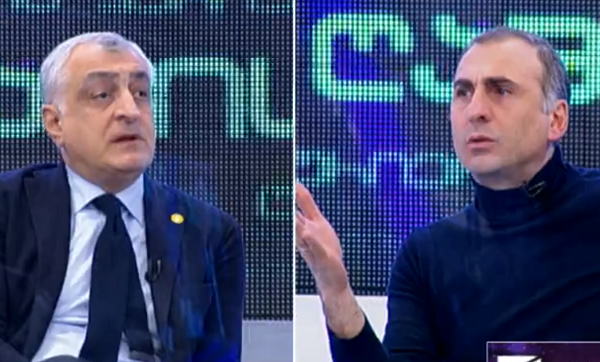 Mamuka Khazaradze, the leader of the political party ‘Lelo’, and Aleko Elisashvili, the chairman of the party ‘Citizens’, verbally confronted each other during a live broadcast on ‘Rustavi 2.’

In response, Elisashvili reminded Mamuka Khazaradze of the conversation held during the meetings. “Did we agree on something?! The only thing I regret is that we did not immediately show everything live. People need to know what we were talking about behind their back. The main thing we were saying was that if we continue to boycott, what happens then, how do we defeat Ivanishvili?! You told me that this was a war. Haven’t I promised you that I would follow you in any war?!,” he told the Lelo leader.

“You, Mr. Aleko, are a liar,” Khazaradze replied, to which Elisashvili called on him to choose his words.

Elisashvili, for his part, said that Khazaradze fulfills orders of Giga Bokeria, the leader of European Georgia.

The leader of ‘Lelo’ replied that Elisashvili fulfills the orders of the ‘Georgian Dream’ and Irakli Kobakhidze and creates the impression that there is a confrontation in the opposition.

“I don’t want to see you attending opposition meetings. I will not even greet you there. This will be the first example in Georgian politics that dignity, words and truth must be valued,” Khazaradze said, prompting a sharp reaction from Elisashvili, who accused the Lelo leader of robbing people.