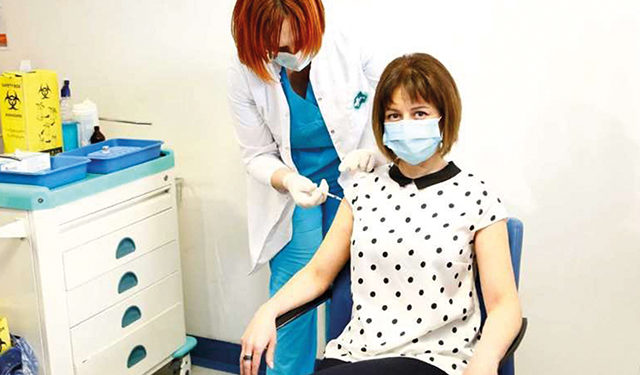 The Health Minister is vaccinated with AstraZeneca. Source: ImediNews

After months of waiting, Georgia finally began vaccinating its people against coronavirus on March 15, at the first stage with the AstraZeneca vaccine.

The country received the first batch of 43,200 shots of AstraZeneca on March 13, principally for medical personnel. In the coming weeks, Georgia will receive 129,600 doses more from AstraZeneca.

However, despite the fact that the vaccine has been imported and the process is ongoing countrywide, there is unprecedented passivity being seen among doctors and the population towards the vaccine, along with high skepticism, meaning mass vaccination is unlikely to be possible. This is mainly related to the incident that happened in Georgia last week, shortly after launching the vaccination process, when a 27-year-old nurse developed anaphylactic shock following vaccination with the AstraZeneca vaccine, and died the next day. Afterwards, it was decided that, in order to ensure maximum safety, vaccination will only be carried out in multi-profile clinics which have resuscitation departments.

On March 25, Tengiz Tsertsvadze, Head of the Tbilisi Infectious Diseases Hospital, publicly expressed his concern about the passivity towards vaccination.

“Although the number of new cases of infection in Georgia has stabilized, the country is in serious danger, as mass vaccination will not possible at this stage. Further, people are no longer following the minimum regulations, especially with regards to wearing a face mask. The rate of wearing a face mask was 70%, now it has dropped to 42%, which is an alarming sign,” Tsertsvadze said.

The National Democratic Institute (NDI) on Tuesday released a report stating that less than half (42%) of Georgians believe that the government’s vaccination plan is effective. Only 35% would choose to receive a vaccine, if given the option right now; 53% said they would not. Vaccine hesitancy is highest among women and individuals under 55.

Among those who are hesitant, the main reasons are concerns about the quality of the vaccine (48%) and the belief that they can overcome the pandemic without vaccination (20%). Georgians, who say they get their news on COVID-19 primarily from television (60%) and internet (35%), look to medical professionals (74%) and the Georgian National Center for Disease Control (68%) for trustworthy information.

“While the country continues to endure a political crisis, it is important to demonstrate that the fundamental needs of the public are being met,” said Alan Gillam, NDI Country Director. “Ensuring a smooth rollout of the vaccine and making use of trusted medical professionals to provide the public with accurate information will be critical to the government’s effort to deliver crucial services and safeguard public health.”

In order to reduce distrust in the vaccine, state officials and public figures this week began to call on the population to get a shot, claiming the AstraZeneca vaccine, which was re-approved by the European Medicines Agency last Thursday, poses no danger to their health. Some chose to be vaccinated on live television, among them Health Minister Ekaterine Tikaradze, President of Georgia Salome Zurabishvili and Deputy Head of the National Center for Disease Control Paata Imnadze.

A Vaccine Choice
On March 25, 30,000 doses of the Pfizer vaccine arrived in Georgia, intended for 14,000 people.
To date, over 4000 medical personnel countrywide have been vaccinated with the first doses of the Astrazeneca vaccine, and from March 25, vaccination is also available for citizens over 65, with a choice in most cases between AstraZeneca and Pfizer.

Minister Tikaradze says that after Pfizer, the Chinese vaccine will be the next to be brought to Georgia.

“We, however, have adhered to the principle that any vaccine imported must have been recognized by a strict regulator. We thus have reason to consider the Chinese vaccine safe for use, so it will be available to Georgians in the near future,” she told TV Imedi.

A New Oral Option?
An Israeli-American pharmaceutical company is preparing to launch a Phase I clinical trial for the world’s first oral COVID-19 vaccine.

“An oral COVID-19 vaccine would eliminate several barriers to rapid, wide-scale distribution, potentially enabling people to take the vaccine themselves at home.

“While ease of administration is critical today to accelerate inoculation rates, an oral vaccine could become even more valuable in the case that a COVID-19 vaccine may be recommended annually, like the standard flu shot,” Oramed CEO Nadav Kidron told the Jerusalem Post.

Pfizer has also begun an early stage clinical trial in the US of an experimental oral antiviral drug for COVID-19, CNBC reported Wednesday.

The drug is part of a class of medicines called “protease inhibitors” that is also used to treat HIV and hepatitis C.

“Tackling the COVID-19 pandemic requires both prevention via vaccine and targeted treatment for those who contract the virus,” Pfizer’s chief scientific officer, Mikael Dolsten, said in a press release.

Dolsten explained that because of the SARS-CoV-2 mutation and its continued global impact, it will be critical to have access to therapeutic options both now and beyond the pandemic.

On Wednesday, Health Minister Tikaradze said she does not exclude the re-imposition of restrictions in certain regions, which are going “red” with their numbers of new COVID-19 cases.

“There is already a discussion about the restrictions, as we have several regions in Georgia, which, as we observe, are actively moving back into the red. These are Imereti, Guria and Tbilisi, where there is the highest mobility rate,” Tikaradze told TV Imedi.