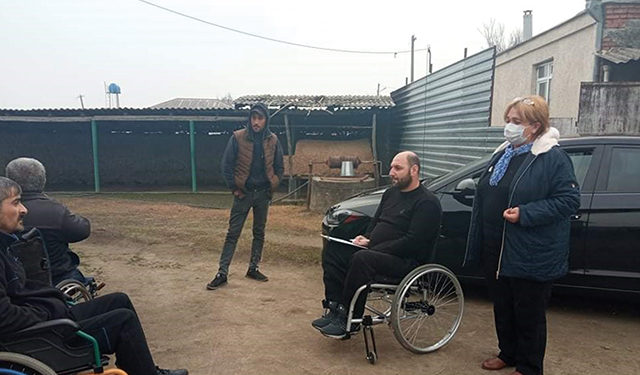 When Diana’s daughter was just three years old, she was diagnosed with autism.

Not knowing where to go or who to ask for support, Diana quickly learned that disabilities were widely misunderstood in her community. Moreover, she found that the providers of critical services, such as healthcare workers, often lack the knowledge and skills needed to effectively support the thousands of persons with disabilities living in Georgia, as well as their families.

In her search to find somewhere to turn, Diana found herself at a parent conference facilitated by the McLain Association for Children (also known as MAC Georgia), a Georgia-based NGO that has been providing support and resources for people living with disabilities and their families since 2008.
There, Diana learned more about autism and its effects on her daughter. Along with other parents of children with disabilities, she received resources and skills to help navigate a world that still struggles to properly understand disabilities, let alone provide the support needed to help people with disabilities achieve their full potential. Diana was able to get better access to services for her daughter. Now, she is helping others in her community to do the same.

Today, Diana is one of four team leaders who run the Lagodekhi-based Independent Living Center. Established by MAC Georgia with support from the United States Agency for International Development (USAID), it is one of six centers located across Georgia. These centers, in Batumi, Ozurgeti, Kutaisi, Zugdidi, Telavi and Lagodekhi, fill a critical service gap by raising awareness about the needs of persons with disabilities and providing resources and information for those in need of support, whether for themselves or for a family member with a disability.

While the Independent Living Center in Lagodekhi is the youngest of six set up across the country, it has quickly established itself as a crucial lifeline for people living with disabilities; providing varied support to individuals, their families, and the broader community.

Much like in the rest of the country, people with disabilities in Lagodekhi face a number of social, cultural, and structural barriers to being able to fully participate in Georgian society. 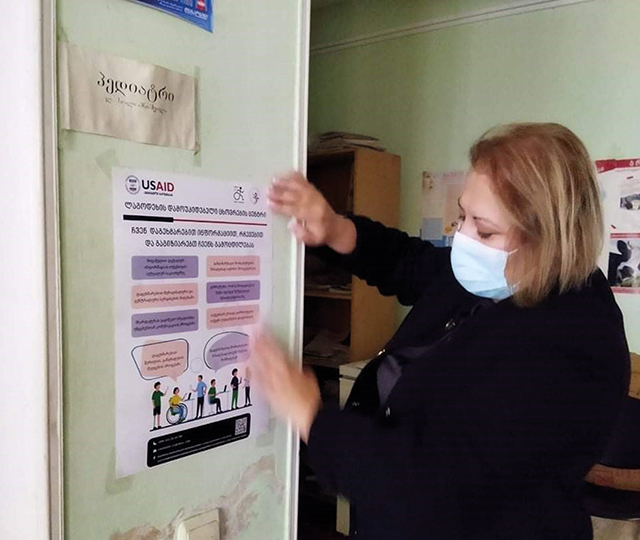 Access to and delivery of critical services is often impeded by lack of awareness among local authorities and healthcare professionals of the rights and needs of people with different disabilities.
Building and transport infrastructure is rarely adapted to allow access for people with mobility disabilities. This results in a cascade effect, with challenges to mobility limiting people’s access to education, healthcare, and employment opportunities. 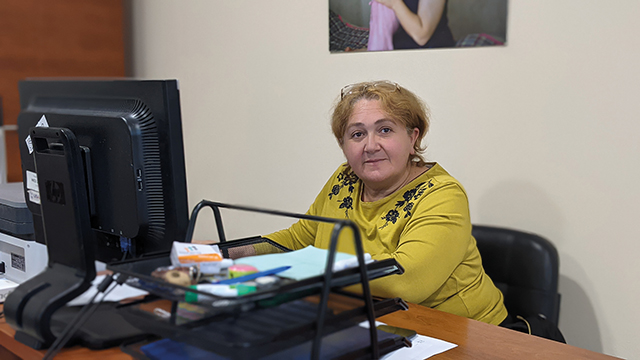 For those who require wheelchairs, getting a wheelchair often comes with obstacles, with many healthcare professionals lacking the knowledge needed to prescribe the correct wheelchair to suit individual needs. Manual wheelchairs, for example, suit people with upper body strength and control, while others may require a postural support or electric wheelchair due to physical limitations.
In addition, many people with disabilities are unaware of their rights and the entitlements they are eligible to receive from the government, while many more feel shunned by society due to a lack of understanding and acceptance, or the discrimination that they encounter on a regular basis.

These are just some of the many obstacles that have cultivated a society in which people with disabilities are often left in the dark to fend for themselves.

This is a familiar story for Guramn, a determined, passionate, and friendly young man who has recently joined the team at the Independent Living Center in Lagodekhi. 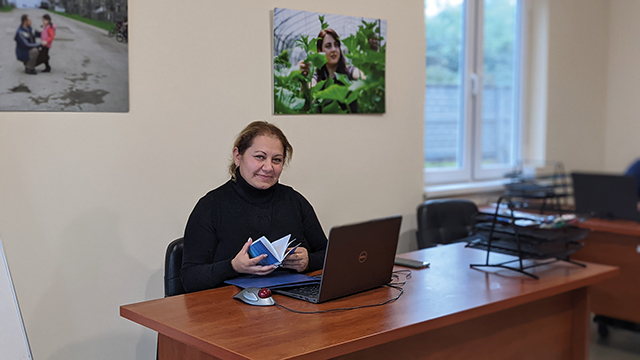 “Before I found employment, I was living in the shadows,” he says.

Guramn describes how he felt closed off from society for years due to a lack of wheelchair access in community buildings and the dearth of employment opportunities for people in wheelchairs, which is largely the result of a lack of understanding among the wider community of the capabilities of people with disabilities.

Frustrated by living on the fringes of society, Guramn began reading up on his rights and entitlements. He soon realized that in order to be able to live a normal life, he would have to start breaking down some of the barriers himself.

“People with disabilities constantly face discrimination, and I am defending my rights wherever I go,” he says.

But it is not only his rights that Guramn is defending. Since joining the Independent Living Center just a few months ago, Guramn has become a fervent advocate, working to educate people across Lagodekhi about the fundamental rights of people living with disabilities.

Along with his colleagues, Diana, Lali, and Manana, he has been working tirelessly to break down some of the social, cultural, and structural barriers faced by people living with disabilities in their locality. Specifically, they are raising awareness of disability rights, challenging harmful misinformation and negative stereotypes, and building local skills and knowledge to facilitate adequate service delivery.
One of the main ways the team does this is through outreach and advocacy. 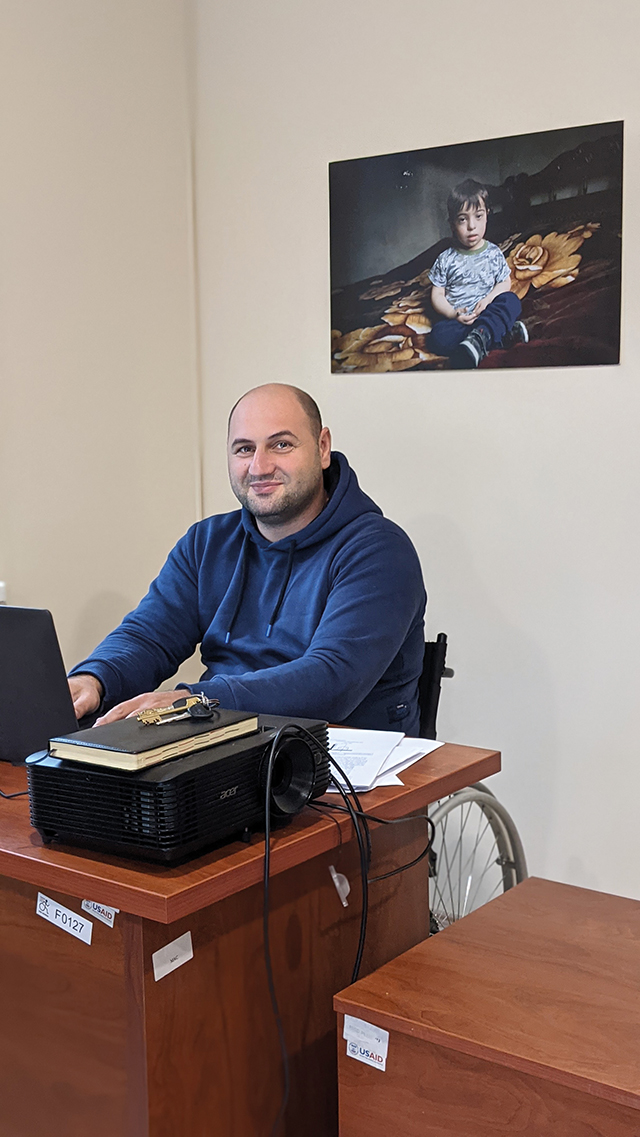 The team is actively providing advocacy support to eight people, and in the short time it has been operating, it has helped many more overcome some of the challenges people living with disabilities in Lagodekhi are regularly confronted with.

Lala, a young woman living in Lagodekhi municipality, reached out to the team a few months ago in need of assistance.

Wanting to apply for a driver’s license at the local council, Lala traveled to the relevant service center, only to be told that she would have to undertake an exam to assess her mental disability before being able to submit an application.

But Lala does not have a mental disability; the physical limitations that have led her to require a wheelchair do not impact her mental abilities in any way.

Frustrated by the unnecessary demands asked of her, Lala looked to the Independent Living Center team for support. The team responded swiftly; reading up on the requirements for people in wheelchairs and helping Lala pull together the relevant paperwork that proved she did not have to undertake any assessments other than a driving exam. 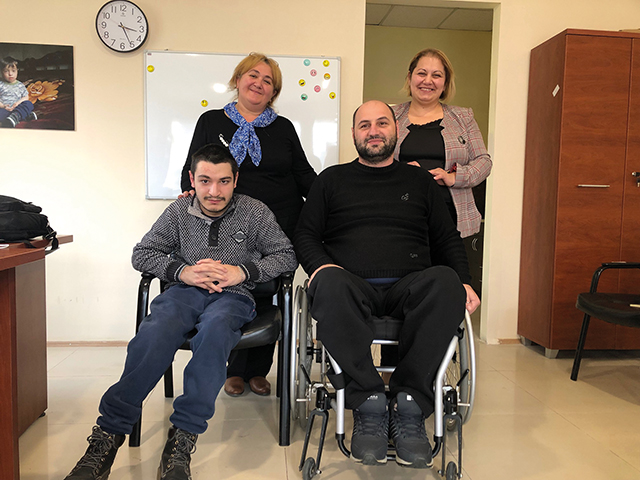 Today, Lala is waiting for her driver’s license to be issued. She is excited about the prospect of being able to travel independently and not have to rely on a public transport system that, for the most part, does not cater to wheelchair users.

Another individual (who requested not to be named) is a forty-year old woman with cerebral palsy, a group of disorders that affects a person’s ability to move and maintain balance and posture.
Cerebral palsy is one of the most common motor disabilities in children, and is classified by level of severity, with many mild forms not posing significant limitations on a person’s life.

This individual, however, has a more severe form of the disability, which requires her mother to be her primary caregiver.

Her mother was no longer registered as the legal guardian of her daughter and did not know how to begin the process of re-applying. So, the two reached out to the Independent Living Center for support.

With Guramn’s help collecting documents and filling out the application, the woman’s mother was able to lodge an application with the government and receive full legal guardianship of her daughter, a critical step in helping to ensure that she has a loved one to represent her interests in the legal areas throughout her life.

As the Lagodekhi center develops a name for itself as a key resource for people living with disabilities across the community, the team is also actively reaching out to those in need through door-to-door visits.

Erik, a 52-year-old ethnic Azeri man living on the outskirts of Lagodekhi, has been in a wheelchair since he was seriously injured in Afghanistan more than twenty years ago. Erik has not been able to secure a job due to his disability, and struggles to support his family with the limited financial assistance he receives from the government as a war veteran. The house he and his family live in does not accommodate a wheelchair, meaning his family must carry him when he wants to move upstairs, downstairs, and outside – where the bathroom is located.

The team received word about Erik’s situation, and traveled to see him and hear his story.

After speaking with Erik to identify the main challenges he faces, Guramn decided that the center would facilitate a more thorough needs assessment to help determine what financial assistance he might be eligible for, and identify any other areas in which he could be provided support.

The USAID-supported Independent Living Centers are also working hard to build the capacity of service providers to support people with disabilities and their families.

Lali, the fourth team leader of the Independent Living Center, is particularly focused on raising awareness among healthcare workers on the rights and needs of people with disabilities- distributing information to doctors and nurses about diagnosis, treatment, and government resources available.

Lali’s motivation stems from her own story as a mother of a child with a disability who has struggled and fought for her son’s rights since his birth. After years of lobbying for better access to healthcare, education, and financial assistance so that she can help her son achieve his full potential, she says she is working as an Independent Living Center Leader because she does not want other parents to have to go through the same struggle she has been through, or to have their children confronted with the same challenges that her son continues to face.

Lali wants to see a future for her son that is free from unnecessary barriers; a future in which he can achieve his full potential and lead a fulfilling life, supported by a community that understands that people living with disabilities can be independent and contribute to society in the same way as anybody else, if given the chance.

With the amount of people the center has helped, one would think it has been running for years.

However, the Lagodekhi Independent Living Center only opened last June.

The progress that the center has achieved in such a short amount of time is a testament to the dedication and passion of its four Leaders to not just break down the barriers that prohibit people with disabilities from living independent and fulfilling lives, but to cultivate a community that shines a light for those who have been left in the dark.

While the center is small, the same cannot be said for its reach and ambitions. When asked about the team’s main goals for the year ahead, Guramn speaks with passionate resolve: “We can’t pick just one thing we want to achieve in 2022, there are many things, many people in the community in need of support. And we will continue to help them, whatever it takes.”

The USAID-supported Lagodekhi Independent Living Center was established by MAC Georgia under the USAID Independent Living Program in Georgia, one of more than 35 USAID programs that help the Georgian people build a more resilient, democratic, and prosperous society.