US Amb. to Georgian PM: We Want Political Crisis to be Defused Quickly

“We had a very productive meeting with the Prime Minister of Georgia. The United States and Georgia have a comprehensive agenda, and it is important for us to continue working on these initiatives under the new Prime Minister.” – US Ambassador Kelly Degnan

The Prime Minister of Georgia Irakli Garibashvili met with the Ambassador of the United States of America to Georgia, Kelly Degnan.

A wide range of issues on the agenda of Georgia-US bilateral cooperation were discussed at the meeting held at the Government Administration.

The head of government noted that the United States is an important strategic partner of Georgia, and the government appreciates the strong support of official Washington in a number of areas, including the implementation of reforms in the country and overcoming the socio-economic difficulties caused by the COVID-19 pandemic.

Garibashvili once again emphasized the importance of further support of the United States as a strong strategic partner, so that the country can receive the required amount of vaccine in the near future and start vaccinating the population.

The American diplomat reaffirmed to the Prime Minister of Georgia the strong support of the United States for the territorial integrity and sovereignty of the country. 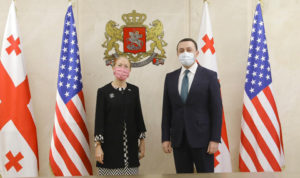 “We had a very productive meeting with the Prime Minister of Georgia. The United States and Georgia have a comprehensive agenda, and it is important for us to continue working on these initiatives under the new Prime Minister. We want the political crisis to be defused quickly so that Georgia can return to other important challenges it faces. The United States will continue to support Georgia to enable the country to launch an economy, respond to the new coronavirus pandemic, and, of course, maintain a strong level of security. We reaffirm our strong support for Georgia’s sovereignty and territorial integrity,” Kelly Degnan said after meeting with the Prime Minister.

The information has been spread by the press service of the Prime Minister of Georgia.