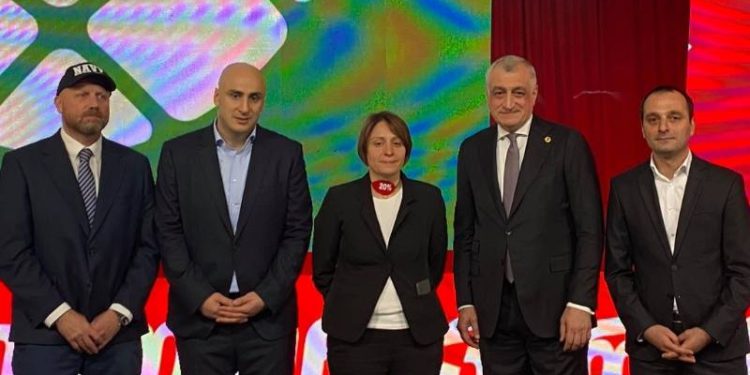 Nika Melia, Chairman of the United National Movement and Tbilisi Mayoral candidate, nominated ‘Lelo for Georgia’ party leader Mamuka Khazaradze as a candidate for Deputy Mayor of the capital.

He made the  announcement at the presentation of members of the coalition team of Tbilisi City Hall.

“He will fight for the welfare of our children and vulnerable people,” Melia said.

“Zurab has the most support among young people, who are our future and for whom we must do our best to make happy to live and work in Tbilisi,” Melia said.

Melia again stated that he will leave the post of Chairman of the “National Movement” if he wins the Tbilisi mayoral election.

“After my victory, I will no longer hold a high party position in the UNM and will be an ordinary member. As long as I am the mayor of the capital, I will not hold two positions at the same time,” he said.

Following the presentation, the third president of Georgia Mikheil Saakashvili said he fully supports the above composition of the cabinet. He released a statement from Rustavi Prison, where he has been on a hunger strike for 20 days now, since the day of his arrest.

“I fully support the diversity of the Tbilisi government and the coalition governance in the capital – to change the regime of the ‘Dream’ into a multi-party, diverse and effective government led by Nika Melia,” he said.

The second round of local elections is scheduled for October 30, as the October 2 local self-government elections in 20 cities of Georgia did not reveal a winning candidate for mayor.

None of the candidates in these 20 cities was able to get more than 50% of the vote, including Tbilisi, where Kakha Kaladze and Nika Melia will face each other in the second round.

UNM and Georgian Dream candidates will face each other in 17 cities in the second round, Giorgi Gakharia’s candidate Besarion Bendeliani came second in Tsageri, and independent candidates Tamaz Mechiauri and Konstantine Sharashidze will face the Georgian Dream in Tianeti and Ozurgeti.

Related Story: CEC Preliminary Results: Second Round of Mayoral Elections to be Held in Tbilisi