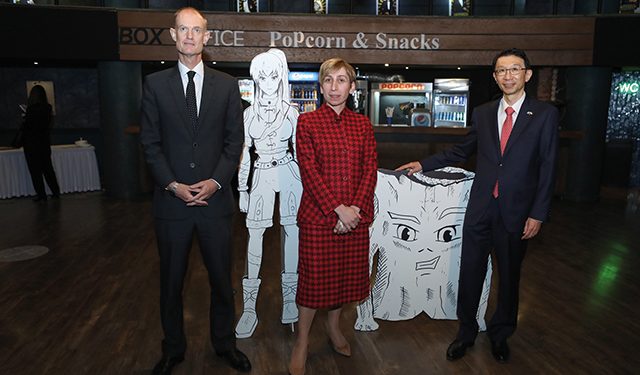 The forest is our friend, and we must protect it. People and nature should live in peace and harmony. This simple and powerful message shapes a storyline of an animated manga released today by the Embassy of Japan to Georgia, the United Nations Development Programme (UNDP) and the National Forestry Agency (NFA).
The animated graphic novel “Forest My Friend” conforms to a classic style of Japanese manga and targets both children and adults within Georgian society. It tells the fictional story of a human girl and a tree stump separated by war between humans and forests. As the story evolves, they put aside their differences and set out on a mission to help humans and trees rediscover their lost connection.
“In Japan, people of all ages and walks of life read and watch manga. It is rewarding to see that in Georgia, this unique piece of Japanese culture serves to protect forests, reduce emissions, and counter climate change,” said H.E. Imamura Akira, Ambassador of Japan to Georgia.
“It is lovely to see a message of peace and harmony expressed with such style. Japan’s essential support to forest protection here, in Georgia, is brought to a wide audience in this wonderful manga cartoon,” said Nick Beresford, UNDP Resident Representative in Georgia.
“The Government of Georgia implements important reforms to promote sustainable forest management at the national and local levels. Environmental education is a critical part of this work. It helps people explore environmental issues, engage in problem-solving, and take action to improve the environment,” said Natia Iordanishvili, Deputy Chairperson of the National Forestry Agency.
The animation “Forest My Friend” was commissioned by UNDP and created by the Georgian organization “Democracy Lab” (DemLab) as part of a broader public campaign for sustainable forest management. Following the first show in Tbilisi, the animated manga will travel to the villages across Georgia where UNDP, Japan and NFA will organize film shows and discussions for schoolchildren and youth.

Georgia’s Climate Promise
Georgia’s lush forests cover over 43% of the country’s territory and provide millions of people with a source of livelihood, clean water, fresh air and disaster protection. Forests capture greenhouse gas emissions and counter the harmful effects of climate change. Nevertheless, this priceless natural resource is threatened by excessive use, illegal logging and wildfires. Almost three-quarters of Georgia’s population, especially people living in rural areas, still rely on firewood for heating and other needs. Unsustainable timber consumption reaches 2.4 million cubic meters a year, which costs Georgia around GEL 446 million annually. Wildfires destroy and damage thousands of hectares of forest every year.
The adoption of Georgia’s new Forestry Code in 2020 marked the launch of forestry reform aimed at promoting sustainable forest management and reducing the risk of illegal logging and wildfires.
In 2021, Georgia adopted the National Climate Change Strategy and updated its Nationally Determined Contributions to the Paris Agreement. According to this ambitious climate pledge, by 2030, Georgia will unconditionally reduce greenhouse gas emissions to 35% below the 1990 baseline level and will increase forest carbon capture capacity by 10% from the 2015 levels.