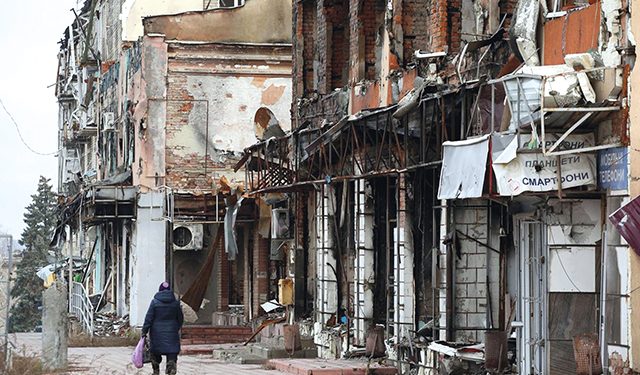 A local resident walks past heavily damaged buildings in the town of Izyum, Kharkiv region, on November 25. Photo by Anatolii Stepanov/AFP/Getty Images

On the first official day of winter, nearly six million people across the majority of Ukraine’s regions have no electricity, Ukraine’s President, Volodymyr Zelensky said on Wednesday night.

Ukraine has accused the Kremlin of reviving the “genocidal” tactics of Josef Stalin as Kyiv commemorated a Soviet-era famine that killed millions of Ukrainians in the winter of 1932-33. The remembrance day for Holodomor last weekend came as Ukraine battles to repel invading Russian forces and deal with sweeping blackouts caused by air strikes that Kyiv says are aimed at breaking the public’s fighting resolve. “Once they wanted to destroy us with hunger, now with darkness and cold,” Zelensky wrote on Telegram. “We cannot be broken.”

On Wednesday, Ukraine’s state emergency services said nine people had been killed in fires, after breaking safety rules in an attempt to heat their homes after Russian attacks on power facilities.

“Only in the last day there were 131 fires in Ukraine, 106 of them in the residential sector. Nine people died, eight were injured,” the emergency services said.

The latest developments in Russia’s invasion of Ukraine
Russian shelling on the southern Ukrainian city of Kherson killed 15 civilians on Friday, officials said, as engineers across the country sought to restore heat, water and power to major cities. 35 people were injured, including a child, and several private houses and high-rise buildings damaged, city official Galyna Lugova said. The shelling of Kherson, a key eastern city recently recaptured by Ukrainian forces, was the deadliest Russian bombardment in recent days.

Ukraine’s national police chief, Ihor Klymenko, said 32 civilians had been killed in Kherson since 9 November, when Russian forces were forced to withdraw from the city that they had occupied for eight months, the Kyiv Independent reports. Since then, Russian troops have shelled Kherson frequently. On 24 November alone, the Russian military carried out 17 attacks on the city, killing seven people and injuring 21, according to a report by the Kherson Oblast governor, Yaroslav Yanushevych.

The prime ministers of Lithuania, Poland and Ukraine, Ingrida Šimonyte, Mateusz Morawiecki and Denys Shmyhal, met in Kyiv on Saturday for talks to discuss and reiterate their commitment to work together “in countering Russia’s armed aggression.”

The member states of the Lublin Triangle released a joint statement, condemning the “systemic war crimes committed by Russia’s forces in regions of Ukraine, including deliberate, indiscriminate, and disproportionate attacks against the civilian population and elements of the civilian infrastructure”.

The statement also condemned forced deportations of Ukrainians, continued attacks around Ukrainian nuclear sites and “the organization by Russia of illegal so-called referendums in regions within the internationally recognized borders of Ukraine”.

The Lithuanian Prime Minister, Ingrida Šimonyte, said on Twitter that the meeting had reconfirmed “the rules-based world order.”

Britain this week imposed a new round of 22 sanctions on Russian officials accused of spearheading the mobilization efforts and the recruitment of “criminal mercenaries”.

The new sanctions hit Russia’s Deputy Prime Minister Denis Manturov, who London said is responsible for overseeing the country’s weapons industry and equipping newly mobilized troops, as well as 10 governors and regional heads in Dagestan, Ingushetia and Kalmykia, from where it noted: “a significant number” of conscripts have been drawn.

Russia’s Central Bank announced that from January 1, it plans to cancel several support measures for Russian banks that were introduced since the imposition of Western sanctions after Moscow sent its troops into Ukraine in February.

In a statement, the regulator said it will extend some measures, including on reserve requirements, but it will force banks to resume disclosing their financial statements and will not extend a relaxation in the open foreign currency position rules.

Speaking at the Berlin Security Conference, German Chancellor Olaf Scholz said that Russia could no longer win the war in Ukraine on the battlefield.

He noted that while Germany took Russia’s nuclear rhetoric seriously, it would not be cowed by it.

The Holodomor, also known as the Terror (or Great) Famine, was a man-made famine in Soviet Ukraine from 1932 to 1933 that killed millions of Ukrainians. The Holodomor was part of the wider Soviet famine of 1932–1933 which affected the major grain-producing areas of the Soviet Union.
While scholars universally agree that the cause of the famine was man-made, whether the Holodomor constitutes a genocide remains in dispute. Some historians conclude that the famine was planned and exacerbated by Joseph Stalin in order to eliminate a Ukrainian independence movement. Others suggest that the famine arose because of rapid Soviet industrialization and collectivization of agriculture.
Ukraine was one of the largest grain-producing states in the USSR and was subject to unreasonably higher grain quotas when compared to the rest of the country. This caused Ukraine to be hit particularly hard by the famine. Early estimates of the death toll by scholars and government officials vary greatly. A joint statement to the United Nations signed by 25 countries in 2003 declared that 7–10 million died. However, current scholarship estimates 3.5 to 5 million victims. The famine’s widespread impact on Ukraine persists to this day.