The World Standing by Ukraine: Official Visits to Kyiv and More Sanctions for Russia 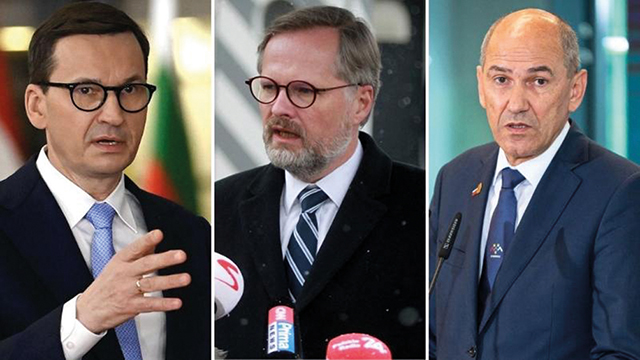 The prime ministers of Poland, Slovenia, and the Czech Republic departed on a train bound for Kyiv on Tuesday

The ongoing war between Ukraine and Russia is the main concern of leaders around the world. The President of the United States, Joe Biden, wrote on Twitter that Putin “may be able to take a city, but he will never be able to hold the country.”

US State Department Ned Price made a comment involving Georgia, stating that very few countries realize the potential consequences of Russian aggression, yet one which does is Georgia, which was invaded by Russian forces in 2008. He noted that many Georgians still have these bitter memories.

Price also highlighted that many Georgians, including those in government and among the citizenship, have expressed solidarity with their Ukrainian counterparts.

“We call on all countries to support Ukraine’s independence, sovereignty, and territorial integrity, but also to uphold the core principles underpinning a rule-based order that has maintained an unprecedented level of stability, security, and prosperity for more than 70 years. These are the principles that Russia violated in 2008 when Russian forces invaded Georgia, and are the same principles that Vladimir Putin is violating today: The idea that borders should be inviolable, that big countries should not oppress small countries,” Price said.

PMs of Poland, Slovenia, and the Czech Republic Head to Kyiv, Georgia Abstains
The President of Ukraine, Volodymyr Zelensky, released a video address in which he called on the leaders of friendly countries to come to Kyiv.

The prime ministers of Poland, Slovenia, and the Czech Republic departed on a train bound for Kyiv on Tuesday, with the aim of meeting with Ukrainian President Volodymyr Zelensky and Prime Minister Denys Shmyhal. The purpose of the visit was “to confirm the unequivocal support of the entire European Union for the sovereignty and independence of Ukraine and to present a broad package of support for the Ukrainian state and society,” a government spokesperson said.

The EU delegation met Zelensky on Tuesday evening as a curfew began in Kyiv, the BBC reported. They are the first Western leaders to visit Ukraine since Russia invaded.

The Czech leader, PM Petr Fiala, told the Ukrainians that they were “not alone.”

“We admire your brave fight,” Fiala wrote in a tweet. “We know that you’re also fighting for our lives. You’re not alone, our countries stand by your side.”

“Your visit is a powerful expression of support for Ukraine,” Mr. Zelensky is quoted as telling the group.

On Wednesday, Poland’s Mateusz Morawiecki tweeted that Ukraine was reminding Europe what courage was, and that it was time for “sluggish and decayed” Europe to reawaken and “breakthrough her wall of indifference and give Ukraine hope.”

Irakli Kobakhidze, Chairman of the Georgian Dream, commented on Georgia’s own possible visit to Ukraine, noting that the issue should be resolved through “broad consultations.”

“Any such issue should be resolved on the basis of extensive consultations, including with our international partners. These consultations should be based primarily on a risk analysis. When such consultations take place, we will be able to voice our position,” Kobakhidze said.

The Sanctions
The Council of the European Union this week approved a fourth package of economic and individual sanctions against Russia.

“The fourth package of sanctions is another major blow to Russia’s economic and logistical base, which Russia relies on to continue hostilities in Ukraine. The aim of the sanctions is for President Putin to put a stop to this inhuman and senseless war in Ukraine,” said Josep Borrell, High Representative of the European Union for Foreign Affairs and Security Policy.

The fourth package of EU sanctions against Russia includes: Prohibition of transactions with certain state-owned enterprises; Prohibition of the provision of any credit rating service to any Russian person or entity, as well as prohibition of access to any subscriber services in connection with credit rating activities; Expanding the list of persons with ties to the Russian defense-enterprise base, which imposes stricter restrictions on materials and technologies that may contribute to the technological refinement of the Russian defense and security sector; Prohibition of new investments in the Russian energy sector, as well as imposing comprehensive restrictions on the export of equipment, technology and services to the energy industry, and; Introduction of further trade restrictions in iron, steel, and luxury items.

Sky News reported that the United Kingdom was imposing sanctions on another 350 companies and individuals in Russia, including Dmitry Medvedev (Russian politician, Deputy Chairman of the Russian Security Council), Sergei Shoigu (Russian politician and army general, Russia’s Defense Minister since 2012) and Mikhail Friedman (Russian billionaire and co-founder of Alfa-Group).