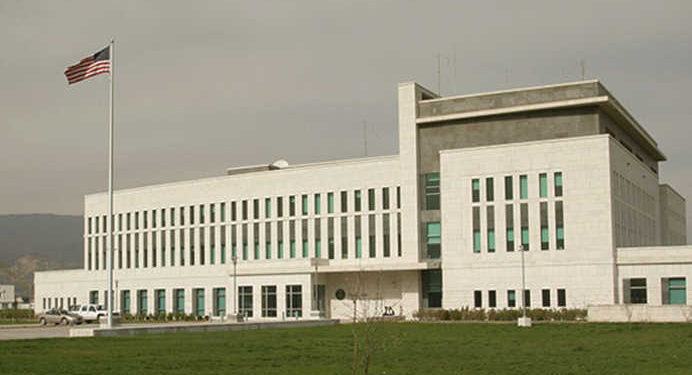 The United States is deeply disturbed and exasperated by the unilateral decision of the Georgian Dream party to withdraw from the April 19th Agreement, the US Embassy in Tbilisi said in a statement.

All of the signatories should be held accountable to their commitments in the Agreement, the statement emphasized.

“The United States is deeply disturbed and exasperated by the unilateral decision of the Georgian Dream party to withdraw from the April 19th Agreement, a document established through six months of difficult but collaborative negotiations, and one that gives an urgently-needed way forward for the Georgian people and their democracy. 115 MPs from at least six of nine elected parties signed the Agreement and pledged to work together in good faith to reduce the deep polarization that is impeding Georgia’s democratic progress. Washington is growing increasingly alarmed about repeated setbacks to Georgia’s democratic future.

“Georgia’s interests will be best served if the concrete judicial, constitutional, and electoral reform elements reached in the Agreement are implemented by multiparty consensus, rather than by unilateral action of one party. Timely progress in implementing these reforms is the most responsible way to end Georgia’s cycle of political crises, and remains critical to meeting Georgia’s goals for its Euro-Atlantic future. Actions that create instability and divisiveness only benefit those trying to undermine Georgia’s success as a stable, prosperous democracy.

“The Agreement lays out a useful roadmap for important reforms that are needed to strengthen Georgia’s democratic institutions, reduce politicization of the judiciary, improve Georgia’s electoral system and power-sharing in the Parliament, and continue efforts to strengthen the rule of law. These reforms are still urgently needed, and should be adopted through an inclusive, multiparty process.

“We call on all parties, including Georgian Dream, to work together to fulfill in good faith the commitments they agreed to and that are vital to Georgia’s timely integration into the European family of nations,” reads the statement.