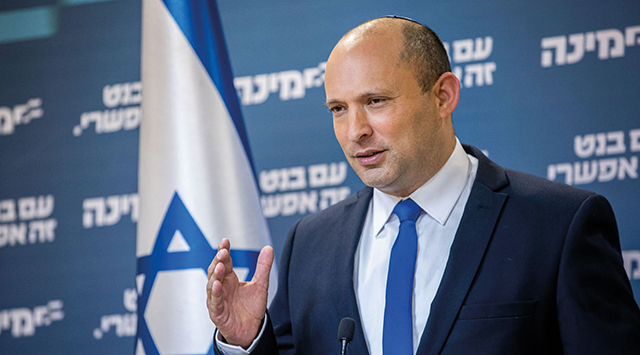 Prime Minister Naphtali Benet: "There are two plagues that are challenging the very fabric of society: one is coronavirus and the other is the disease of political polarization. Both can erode public trust in our institutions, and both can paralyze nations."

There are two plagues that are challenging the very fabric of society: one is coronavirus and the other is the disease of political polarization. Both can erode public trust in our institutions, and both can paralyze nations. If left unchecked, their effects in society can be devastating. In a polarized world, where algorithms fuel our anger, people on the right and on the left operate in two separate realities, each in their own social media bubble, hearing only the voices that confirm what they already believe in. People end up hating each other; societies get torn apart; countries broken from within go nowhere. – These words belong to the new Israeli Prime Minister Naphtali Benet, and it is as if he consulted his crystal ball to gaze into Georgia’s current social and political life. He certainly spoke about the entire world, but the words sound so perfectly descriptive of the situation in this country that I couldn’t help but quote him so abundantly.

If we try to wax more specific, Georgia is today the arena of two vehemently feuding and severely polarized political stances which then branch out into smaller ideological groupings, some of them on the side of the ruling Georgian Dream, which is still associated with the fame and name of its founder Bidzina Ivanishvili, always conspicuous with his absence in big politics, and the rest supporting the United National Movement, lead by its founder, the now imprisoned Mikheil Saakashvili, former president of Georgia.

These two political powers are so irreconcilable in their concepts of the nation’s future that a balanced intelligent discourse between them about the fate of the nation seems to be impossible, no matter how detrimental to the good people of Georgia their interminable and mutually devastating fight might be; one of them trying to stay in power to keep the country in affordable socio-political equilibrium and economic stability, and the other bending over backwards to trigger instability of a national magnitude, thus avenging the loss of the ruling power almost ten years ago. They both see our life in totally different colors; they are not capable of noticing anything positive in each other’s actions; they physically abhor one another, and they can’t help it. Meanwhile, the nation is suffering from the multifaceted irretrievable losses which might take tens of years to be reinstated.

The way out is currently blurred so badly that the working part of the nation is moving forward towards the limits of survival blindfolded, without the slightest idea of what our healthy future doings may bring. And this is happening only because the UNM wants the power back with such an unquenchable thirst that even our most dedicated friends around the world feel impotent to come up with some rational blueprint to put us back on the track of development.

A central piece of political contradiction has been made of late out of the almost annihilated and now reincarnated political figure of the republic’s third president. He gave a bulky reason to the current government of Georgia to lock him up and keep him contained for several years to come. The nervously poised Nationals want to see him alive and kicking exactly as he is remembered from those good old times, but the guy is sick and needs help; the wistful Nationals want him to be happily at large as he was just a few months ago, but he is shackled and restricted; the livid and heated Nationals want their jailed leader to be catapulted from his unfortunately deplorable captivity right into the painfully-dreamt-of snap elections as their candidate for the leadership at the national level, but the golden captive leaves a lot more to be desired for such a glorious role. And to achieve those tremulously cherished goals, the Nationals yearn to fill the main thoroughfare of the capital, the famous Rustaveli Avenue, used to thirty years of endless political rallies and manifestations, with million-strong crowds to elevate the situation in the country to a revolutionary charge and shake up the currently ruling political force to the extent they’ll give up the governing reins and put them straight into the hands of Saakashvili’s belligerent aficionados. It will not happen!