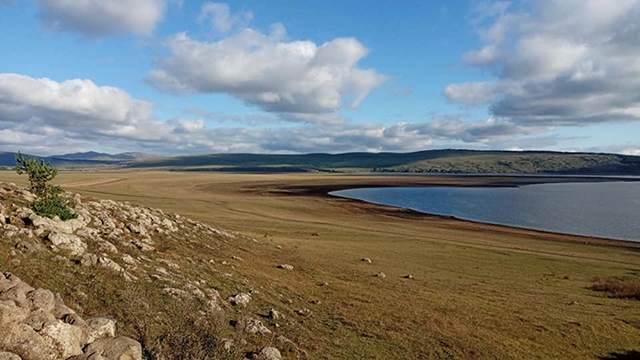 Dress up warm (for even in summer, the wind in this region can be biting), bring your best camera, and prepare for some little-known and too-little explored natural and man-made wonders.

Tsalka (the town of), at the center of a volcanic basin and poised on the edge of the Tsalka Reservoir, which was created in the mid-20th century for energy generation, is a quiet settlement with a lot of prospects for development, under two-hours’ drive from Tbilisi. It has a multicolored history, with Germans, Greeks, Armenians, Azerbaijanis and Georgians (mostly from Adjara and Svaneti) choosing to come here to farm the fertile volcanic earth (the biggest crop being potatoes), or to herd sheep or cattle. This makes for a mixed community of Orthodox Christians and Muslims. A trip to the Tsalka Mosque (which services up to 2000 followers every Friday) is an eye-opener, having been built by Adjarans to look from the outside like a regular house, while inside it blooms with all the bright, positive colors of the religion. Traces of German heritage are best seen in Trialeti village (also sign-posted as the former Alexandershilf), where you’ll find a Lutheran church and high-garetted houses built from the early 19th to the mid-20th century, whose German style clearly merges with elements of local design.

Just outside the Tsalka town is Dashbashi Canyon: in autumn a deep multi-colored splendor whose river can be reached via a steep, zig-zagging pathway in good weather, while a glass footbridge is in the making for future visits.

Don’t miss the small church perched high above the gorge, and be sure to explore the gravestones with their carved personalities (see if you can spot the seamstress and the standing horse!). The vantage point also makes for some fabulous photos of the canyon and nearby Dashbashi village.

Also worth seeing is the Beshtasheni Waterfall to the north of the Tsalka Reservoir: a far smaller canyon than Dashbashi, but just as beautiful in its own way.

Not far away is an old Greek village, though the Greeks are long gone and many houses left to ruin, and one of many pine-wooded areas you’ll see on the edges of the basin, planted by the Soviets in an attempt to balance the harsh, barren landscape.

The Tsalka Reservoir, at 1506 m above sea level, is 33.7 km², and at its deepest around 25 meters. It is said that two villages were flooded when the Soviets decided to create the reservoir, and that when the water is low, you can see the steeple of the flooded church, along with the roofs of numerous houses. Georgia’s answer to Atlantis for divers willing to brave the cold, perhaps? It’s also a great place for sports fishing and other water-based recreational sports, though this is a project in the making, and for now the river-fed reservoir is nothing more than a beautiful landmark which from every angle is sure to make a great landscape photo.

Head south to the village of Gantiadi, take a left just before the bridge, and follow the rocky left embankment high above the river. When you get to the giant white waterpipe (impossible to miss), climb down around four meters and turn right. Stick close to the rock-face and about 20 meters in you’ll see your first exposed petroglyphs, with a second set a little further along. Why the complicated directions? Because there are no signposts and no descriptions!

The petroglyphs, which were age-tested in Soviet times, are said to be around 7,000 years old. They feature deer (including a deer calf feeding from its mother), hunters with bows-and-arrows, and, strangely, camels! We can only presume that if the dating is correct, this ancient artist was inspired by the sights of traders traveling by camel on the Old Silk Road.

Alongside the sad fact of its lack of protection and sign-posting is the reality that people have more recently come and scratched their own tags and pictures into the rock: it is for you to decide what is genuine petroglyph and what is an example of modern graffiti.

The Oliangi Vauclusian Spring (also known simply as “Berta”) is a pilgrimage spot in the village of Oliangi. A small monastery sits beside the road in a walled courtyard, but that’s not what the people come to see: they want the stone pool, which is inhabited by a family of “sacred” trout which lives and breeds there, never leaving, though they have free access to the stream below. The water is also said to be curative to believers.

Paravani Lake is located 2,073 m above sea level and has a surface area of 37.5 km2, fed by rivers and underground springs. It is much shallower than the Tsalka Reservoir, at a maximum of 3.3 m, and in winter freezes to a depth of around half-a-meter. Like the reservoir, Paravani is also said to have a mystery structure in its depths, this one thought to date to the Bronze Age.

The Poka (also pronounced Foka) St Nino Church, in the village of the same name, is home to a group of renowned productive nuns who create the best cheese you’re likely to taste in Georgia. And their craft doesn’t stop there, with a variety of bio sweets, skin creams, and handmade souvenirs, among them cloisonné enamel and decorative candles, available in their shop: guaranteed to inspire you to dig deep and empty your pockets!

The lakes of Madatapa and Bughdasheni, at 2,100 meters above sea level, offer incredible opportunities for photographers and bird-watchers alike, with a vast year-round offering of migratory birds stopping off for a rest on their long journey.

There are birdwatching stations available, and you can contact the Javakheti Protected Areas rangers for help and advice.

Be sure to stop at the village of Gorelovka on the way (or way back) and pop into the house-museum of the Dukhobors, a Russian emigrant community of strict sectarian, pacifist Christians, of whom there are just 100 remaining in Georgia. It’s easy to spot with its blue painted wooden details and grass roof, though there are others of this style dotted throughout the village.

Inside the main building you can see the meeting hall (with two separate entrances, one for men on the left, and one for women on the right), with benches running all around and examples of the sewing the young girls do: scarves, cushion covers and the like.

The community funds its own maintenance, so do head to the door of the central two-floor tower house and pop two Laris in the hole to help them!

What else to see and where to stay?

The above merely scratches the surface of the treasures this as-yet poorly developed region boasts. There are numerous ruined fortresses, lakes, mud-track villages, churches and Natural Park areas to explore, either on foot, by bike (as the landscape for the most part in both municipalities is flat), or for further reach, by 4×4. Head to the Javakheti Protected Area Visitor Center in Martuni, near the large town of Akhalkalaki for more information, or ask around in Tsalka. Be aware that due to the mixed heritage, there are many residents (particularly in Ninotsminda) who don’t speak (or even understand) Georgian. Russian is the main go-to language here, though the government constantly strives to better integrate the settlers into Georgian culture.

If you’re looking for accommodation, word-of-mouth guest houses are available in the larger towns, and you may be able to find a local willing to put you up in a village (though be aware that neither the guest houses or homes will have heating in the bedrooms!). In Tsalka, there are a few simple hotels, signposted, which offer en-suite rooms with heating.

This is something of an unforgiving region in terms of its cold climate, chilly even in the height of summer when the wind blows, but it is among the top of Georgia’s long list of municipalities with incredible landscapes, historical monuments and the chance to really become one with nature.

Many thanks to CENN and the European Union’s ENPARD program for not only offering me the chance to explore this interesting area of beautiful Georgia, but also for the great work they are doing training, supporting and funding essential development projects and Local Action Groups for the betterment of local communities, by uniting local minds and hands. 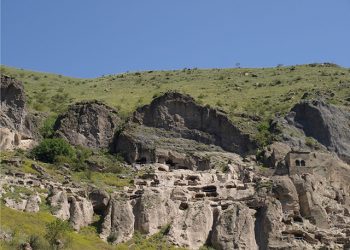 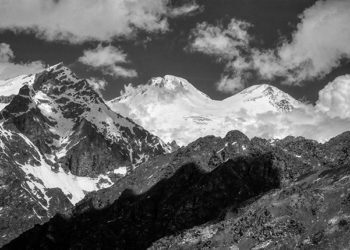 For my Collection: Nakra, Svaneti