The Sit Down: Zviad Adzinbaia and the Information War against the Kremlin 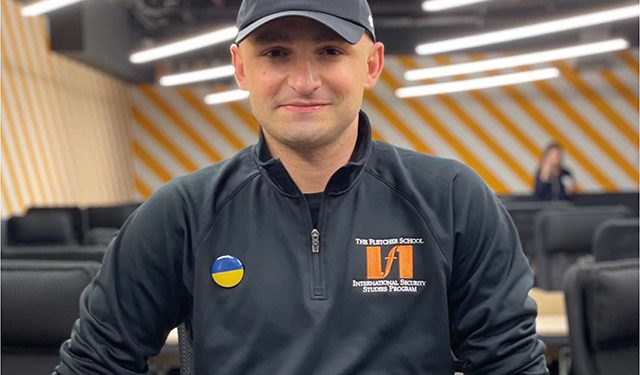 The Kremlin and its information campaign across the region is a well-known, and well-funded, propaganda machine. They have crafted a “product” with decades of experience in how to manipulate popular opinion in favor of their agenda. This product has been exported with varying success around the world.

Despite this, many have taken to combatting their efforts, particularly with Russia’s attempt to garner support for their vicious invasion of Ukraine. Combined with their brutal repression of dissent domestically and in occupied territories, the fight against this disinformation is a difficult one. One organization has started a unique approach to this proverbial crusade.

Zviad Adzinbaia is the founder of the Digital Diplomacy Task Force. He leads a team of experienced cyber, media, and digital diplomacy aimed at helping Ukraine resist their portrayal by Russian media. GEORGIA TODAY sat down with Zviad to explore the man, the mission, and the challenges he faces now and in the future.

What’s your personal take on the information environment surrounding the ongoing war in Ukraine?
I would say it is very hot. For the Ukrainian side, they are fighting a defensive war and any reaction they have is justified against the Russians. When it comes to the Russian side, they failed to meet the expectations we had in terms of getting an upper hand in the information war. What we’re focusing on is the Russian assets in European and American based social media and digital platforms. RT, Sputnik, and Ruptly are selling content to these Western networks.

Russia’s information environment operates globally. They can take it from South Africa, to India, and then into somewhere these EU bans are not applicable. That’s what has determined our thinking in taking further action against these Russian accounts. That’s the trigger that the Digital Diplomacy Task Force, that I proudly represent, engages in the field.

Tell us about your team.
Our team was formed for one reason, and that reason is Ukraine. We are committed to the idea that Ukraine is fighting a just defensive war for not only their sovereignty, but sovereignty as a broader concept. They’re fighting for Georgia, for Europe, for the United States, and the rest of the free world.

Professionally, we have a team of over 10 that have been working for over three months, pro bono, donating their time proudly. We help Ukraine advance its position in the information environment but also help the rest of the democracies improve information integrity across various platforms. We use our skills of media, social media analysis, and digital diplomacy to work closely with Ukrainian civil society, which is also part of our team.

We are not taking a hostile approach towards information platforms, but working with them. We are very collaborative, because what we are trying to do is in their interests to be a credible, pro-democracy, pro-freedom, pro-expression platform. That is not to say that freedom of expression is applicable to those who are pro-censorship or oppressing those that are fighting for freedom.

The Kremlin has immense resources and an almost bottomless bank balance. What do you intend to do to counter this imbalance?
We play our game, in a nutshell. We don’t care about what the Kremlin thinks about us, and our biggest “weapon” we bring is allies. These allies are technology, NGOs, government actors, and multi government actors like the European Union, who have been working to counter Kremlin mainline information operations for years.

There is a whole list of professionals and organizations, such as the Atlantic Council, the German Marshall Fund, and others, that are deeply committed to making the information environment more transparent. The Digital Diplomacy Task Force tries not to overlap with these existing initiatives, but rather to amplify them as much as possible.

For instance, we are not doing open-source investigations ourselves. We are relying on our partners, such as the digital forensic research lab of the Atlantic Council. We use their findings to strengthen our digital diplomacy, and use such findings to build the case to Meta, Twitter, and others as to why these Russian accounts should not be allowed to exist.

Surely your efforts won’t go unnoticed. Are you concerned for you and your team’s safety?
I don’t think so. There’s nothing hidden about what we do. It is open-source work. We’re not intelligence officers, but digital diplomats. We’ve been in the field so we take precautions about what we do, what we say, and who we talk with. Our computers are of course more protected than your average consumer computer, but if everything from our files and storage went live tomorrow, it would be no problem.

Everyone would see how we are consistent and committed to what we are doing, and how transparent we are.

This war is unlikely to come to an end soon, particularly if things don’t change in Moscow. What does the future look like for you, given that likelihood?
In the coming months, we are committed to following up and trying to get where we want to get in terms of the current campaign. We want the campaign to succeed and the wheels are turning slowly. However, as the FBI likes to say, the wheels are turning. The campaign is gaining momentum. For instance, this week the pro-European rally promoted our hashtag in front of over 120,000 people. That’s really good for our recognition and confidence to get ahead.

It also shows our colleagues at Meta and Google that there are a lot of people who physically and consciously care about what we do. As soon as possible, we aim to make this campaign a success. There will be more endorsement, more analysis, and more articles about us. We are working closely with the Ukrainian entities to identify the critical areas that they need support from groups like us. We don’t exactly know where we will be this time next year, but what we do know is that we will be there.