The Sit Down: An American Volunteer in the Service of Ukraine 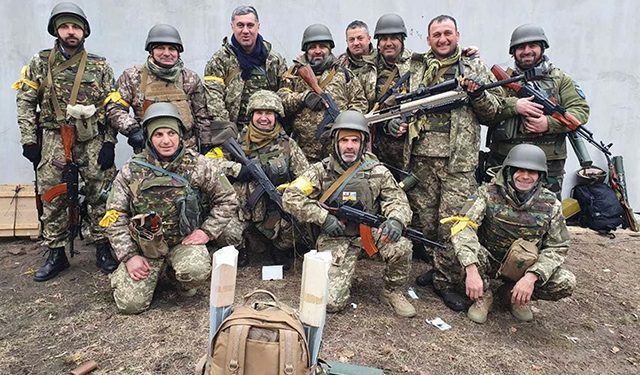 From the outset of the Russian invasion, and even prior, going back to 2014, Ukraine has seen an influx of foreigners eager to support the nation. From medical and training support to logistics and warfighting, thousands came to help in any way. However, the task of defending the country by strength of arms took immediate priority.

Georgia was one of the most supportive in terms of volunteers. Many Georgians saw Ukraine’s struggle parallel their own troubles with Russian aggression. Not all the volunteers coming from the South Caucasian nation were Georgian, though. One particular volunteer, who had made his home in the mountains of the Racha region, fared from the mountains of north Georgia in the United States. Ryan had grown up in a warm family with a love of the outdoors, and in the country of Georgia, he had his own business offering guided hiking tours in the highly visited Racha region. February 24th changed everything for him.

Upon returning to Kutaisi from conducting his business in the remote mountains, he learned of the Russian invasion. GEORGIA TODAY sat down with Ryan to discuss his journey to Ukraine, the training and first experiences, and what the future holds for this seasoned member of what is arguably Ukraine’s most famous military unit.

How did you find out about the International Legion and what convinced you to enlist?
I was actually already on my way to Ukraine before the Legion was formed. I came down from the mountains on a trip with my clients and as soon as I got cell service, I saw the news of the invasion. I immediately handed off all responsibilities to the rest of my team and I went to Kutaisi to get on the fastest flight I could to Poland.

I arrived in Poland on the 26th of February. The Legion didn’t exist. It was formed during my travels. I decided to join it because I thought it would be the most legal, official, and best supported way to join the Armed Forces of Ukraine as a foreigner.

Can you explain your journey from home to the recruitment office in Ukraine?
It was a bit strange early on. I was in Racha, and I had a big GAZ-66 truck and I took it down the mountain to Kutaisi where I put it into storage. When I got to the airport, I tried to get on the quickest flight to Poland, but all the flights were booked up, as many Georgians were also trying to go. I ended up flying to Frankfurt, then to Barcelona, then to Krakow.

There, I got on the train and could see all the refugees at the train stations near the border. From there, I took the train to Lviv. I only got into the Legion through a contact I had whose friend was in the security services of Ukraine. I had lived in Ukraine for two years prior to Georgia, so I still had a lot of friends and contacts.

This security friend came and picked me up in quite a fancy car. He drove me to the first Legion pickup point, and from there I went to the training base. There was nothing really official at this stage, as this was only February 27th and everything was still ad hoc. When I arrived at the international legion, I was among the first 20 people.

What was your training like? Did you feel ready for what lay ahead?
It was a complex situation at the beginning. They were forming a new military unit in the middle of a war, so there’s a shortage of everything, including personnel. In the beginning, there were so few of us there wasn’t really the ability to organize anything yet. We had maybe 20 or 30 people, so we were organizing our own training sessions to get to know each other. We started looking at what skills we had and what we could learn from each other.

For example, I was teaching people how to use a compass and navigate with a map. It wasn’t until later when we started to get more people that we had trainers from the Ukrainian army. Then we started having more formal courses.

What was your first taste of combat against Russian forces like?
There’s so many things I’d love to mention, but we’re not allowed to say. I think the most interesting thing is the experience of being under heavy shelling or cruise missile strikes. That’s something people in Western militaries can’t really relate to. Maybe the Taliban can relate to that better. Not many soldiers have been on the receiving end of massive conventional cruise missile strikes, and in Ukraine there is no safe place: Every military base is a potential target and there is no safe zone. The feeling of being in combat has a blurry line, because you’re never really safe.

I was involved in a few very interesting smaller missions, but I wasn’t in any high intensity firefights. They just weren’t all that common at the beginning of the war for us. There was fierce street fighting, and it was nasty stuff, but that wasn’t our task. We did normal infantry stuff, like being in holes. I would say that we had tasks that you would associate with the term ‘light infantry.’

The fighting is not looking as if it will end anytime soon. What does your future hold with the Legion and overall?
That’s a pretty easy question for me to answer. I’m going to stay a while longer. I don’t have plans to leave in the near future. We’re all ready to start pushing back, and everyone’s ready for the word that we’re going to start to retake territory. This is what everyone is preparing for and where everyone’s mind is at. I was worried people would begin to accept a malaise; to accept a static situation and it remaining that way, but that’s not the feeling at all. My forces, all the other forces I meet, are ready and eager to start hitting back and retaking land. Everything we do is about preparing for that, such as getting more equipment, building our cohesion, and working out how we can help other forces. We’re preparing and waiting for that opportunity now.