The Namakhvani HPP: Gov’t and ENKA Ready for Constructive Talks with Protesters 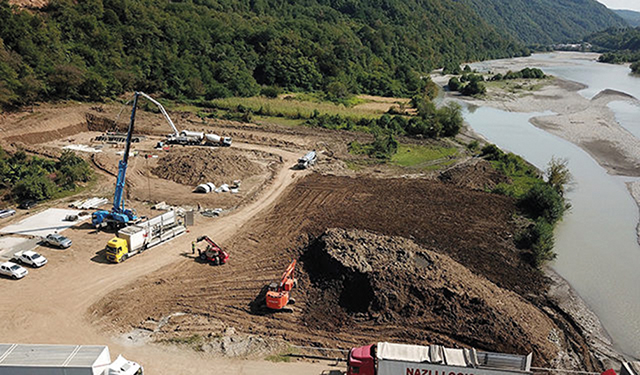 Our main demand is for ENKA to leave the Rioni Gorge and to terminate all agreements that have been signed with it. - Varlam Goletiani. Image source: Ipress.ge

Minister of Economy Natia Turnava responded to ongoing protests regarding the construction of the Namakhvani HPP this week, saying that the government is ready for “meaningful dialogue.”
However, she added, talks on this issue will be very difficult if the capital’s streets remain blocked.

“All branches of our government are ready to discuss this issue, with experts. However, of course, dialogue will be very difficult if the streets are blocked and paralyzed,” Turnava said.

People protesting the construction of the Namakhvani HPP, currently being built north of Kutaisi by a Turkish-Norwegian company ENKA Renewables LLC, last weekend set up tents in Republic Square in Tbilisi, claiming they would stay in the area until their demands were met.

“If our demands are not met, we will picket and paralyze the capital,” said Varlam Goletiani, one of the organizers of the rally.

After a 208-day protest in tents in the Rioni Gorge, and further rallies in Kutaisi, activists protesting the construction of Namakhvani HPP moved to Tbilisi.

“The battle begins here and now, and we will bring it to an end. It is important to be ready for a long-term struggle,” Goletiani told his fellow protesters on Republic Square.

Construction company ENKA responded to the ongoing rally against the construction of Namakhvani HPP with a special statement.

“We would like to state with full responsibility that the opinion of both the residents of Rioni Gorge and each citizen of Georgia is important to us. We recognize our share of responsibility to the public and once again publicly declare our readiness to continue the business discussion with all stakeholders.

“We believe that the most important thing today is to use any business format, all opportunities for dialogue, so as not to leave unanswered any problematic questions, and, based on facts and arguments, to assure you that the Namakhvani project is a Georgian affair that serves the well-being of Rioni Valley residents and the country,” reads the statement.

In an exclusive interview with GEORGIA TODAY last week, Elene Ghubianuri, Administrative Director of ENKA Renewables, said that the company, contrary to the claims of the protesters, had been open with the local community from day 1.

“From the day of winning the international tender in 2017, the company launched an active communication campaign with the local population,” she told us. “To this end, community coordination councils were set up, whose members were represented by representatives named by the villages. Informational meetings and discussions were held in the format of these boards with the participation of the company’s management, its employees, and invited experts. Information centers were also set up where anyone interested could get information on key issues, as well as raise a new issue for further discussion. The focus of the discussion was on dam safety, environmental and social impacts, and compensation policies.

“The company also discussed the development prospects of the valley and the company plans for projects to improve the well-being of the locals,” she said. “These include the development of family hotels, winemaking, beekeeping, agriculture and education.”

Yet, Goletiani noted this week that their demands are unchanged.

“Our main demand is for ENKA to leave the Rioni Gorge and to terminate all agreements that have been signed with it. This includes the contract and the transfer of land. Further, we demand the Minister of Economy resign. We want to raise the issue of responsibility of all those who participated in the preparation of this documentation, and announce a moratorium to start public engagement to address the problems in the energy sector so that protests such as these are no longer necessary,” he said. “As it stands, this protest will continue until our basic requirements are met.”

“Each and every citizen should know that speaking in the language of an ultimatum is categorically unacceptable, and is reminiscent of the dark 90s,” Prime Minister Irakli Garibashvili told reporters in response, noting that the state will have an appropriate response for all citizens who violate the law.
“We did our best to provide maximum information to our citizens. We also offered our citizens a suitable dialogue format. There have been numerous attempts on our part,” the PM claimed.

“In addition, we invited the EU Special Representative, who will once again examine in detail all the nuances and details of this project. I also instructed the Ministry of Justice to study the compliance of the project with international practice using an independent law firm.

“At the end of the month, I’ll meet the investor company owner. I myself am involved and want to be aware of all details so that there is nothing contradictory in this agreement,” Garibashvili said.

On May 24, Goletiani suggested the protesters march to parliament and dialogue be held with parliamentarians in the street, or in the presence of media, “for all to hear.”

Kakha Kuchava, Speaker of the Parliament, responded to this idea in the negative, labeling it as an “unconstructive format for dialogue.”

“The format that was proposed to us, of course, was not constructive, because it is physically impossible to discuss issues with hundreds of people at one time. During the chairmanship of the Environment Committee, we had the practice of setting up a working group on such issues, and all our meetings were broadcast live, including on Facebook. My door is always open for a constructive conversation, and I will gladly continue to involve all parties in a transparent manner in any form, be it live, on TV, Facebook, or social media,” Kuchava said.

To date, no dialogue has taken place in any form.

Following a three-day protest in Georgia’s capital Tbilisi, the “Guardians of the Rioni Valley” returned to the village of Gumati and spent six hours overnight Wednesday repeatedly hitting the metal barricades around the construction site that had been erected by the police.

The move caused the Ministry of Internal Affairs to launch an investigation.

“The metal barricades set up by police for security reasons near Gumati have been damaged,” the MIA announced Thursday morning.

“Opponents of Namakhvani HPP construction moved from Tbilisi to Rioni Gorge yesterday and continued their protest rally in Gumati. The gathered crowd threw stones and various objects at police security barricades throughout the night. We are looking into the fact of violation, which will be followed by an appropriate legal response.

“The Ministry of Internal Affairs calls on citizens to act in full compliance of the law and follow the rightful demands of the police when exercising the right of freedom of expression and assembly,” the Ministry stated.

The police have mobilized a water cannon vehicle on the ground.

On arrival in Gumati, Goletiani said the “Guardians” were going to block all entrances to the valley and restrict the movement of ENKA vehicles.