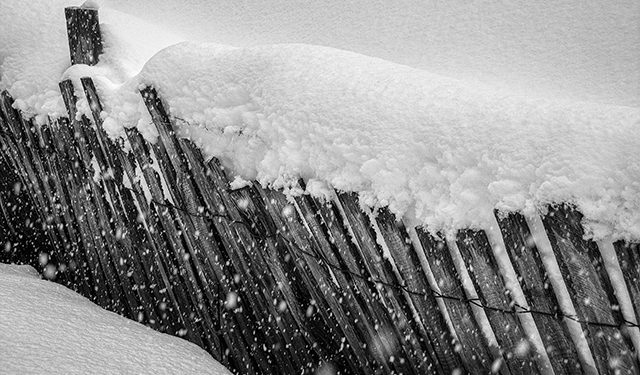 The low temperature here outside for tonight (as I write this) is 1 degree warmer than the low in my bedroom when I lived in Ushguli for two winters from 2007-2009. I had the best, closest to hibernation, sleeps of my whole life at -4 degrees C, though, so I wasn’t complaining. Winter has gone mild again, which is fine.

The snow, however, is a different story. As I look out of the house’s living room windows to the north, it’s been flaking down and building up on the fences all day; the same is forecast for tomorrow. Again, for the thousandth time, I am deeply grateful that the house we bought had an unpainted roof, one of corrugated galvanized metal sheets, off of which the snow has always slid, sooner or later, saving us the huge job of shoveling it off multiple times per winter just so it won’t collapse under the extra weight!

The combination of this specific weather (snowfall, mild temperature and no wind) is allowing the snow to build up on those fences in ways which stun me speechless with their texture and beauty. They resemble nothing so much as waves crashing over, but fittingly frozen to a complete stop. I go out to photograph them in black and white, as the colors are all but gone anyway and would only distract from form and very soft, detail-defining lighting. No point in waiting until the flakes stop coming down: if I risked doing so, the wind might pick up, or the melt accelerate, and what I am delighting in seeing might simply disintegrate. Instead, I take a few frames of each scene without moving the camera, and will combine the individual shots’ sets of descending flakes into one to suggest the amount actually coming down.

Not everyone can rejoice as I do in this much snow coming down. In many ways, it IS more of a curse than a blessing for most people here. They DO have the painted, snow-sticky roofs, and must rescue them time and time again from potentially crushing weight. And many of them are old enough to remember that catastrophic winter of the late 1980s in Georgia, about which I have written a few times already. It was about three weeks of unrelenting snow, and people had to clean their roofs off in three shifts of eight hours every day. Thye had to TUNNEL out of their houses to their barns to try to give the livestock food and water. Such experiences are the opposite of the little things: The Big Things which can scar and traumatize you for life and make you despise the season and its precipitation, hate and fear both.

It is with no feeling of smugness that I enjoy winter, no superiority. I haven’t lived through the worst that the cold months can bring, or lost home or loved ones to that time. I am merely glad that I, while no winter sportsman, can revel in the simple, small beauty which comes in silence, turns the local world monochrome (greens and then all-hued flowers will explode in spring), shows me how many different forms water’s frozen versions can take, and makes me glad to notice them. They are so fleeting, so delicate, so pure white or clear as crystal: an otherworldly clarity.

All I can do is marvel, and try to capture in photographs what I am both seeing and experiencing. For now, this is late winter in Upper Svaneti. The seasons bracketing it are both so colorful that its blacks, grays and whites are a welcome contrast. And summer in the lowlands, while tending to the dry browns and yellows of drying-out, up here continues the themes of spring’s prelude anyway. Winter is simply unique.