The Impact of COVID-19 on Tobacco Consumption in Georgia 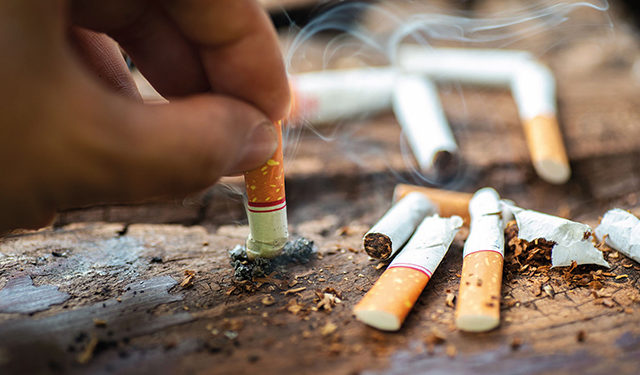 As mentioned in our previous blog, excessive tobacco consumption is an important public health policy issue. According to estimates by the World Health Organization (WHO), 32% of the adult population in Georgia smoked tobacco in 2019 (WHO, 2021). The prevalence of smoking in men was 56.9% – the fourth in the world and first in Europe. The rate of tobacco smoking was recorded to be eight times lower in women (7.1%), which likely does not reflect the real picture; for example, one study based on nicotine tests revealed that smoking prevalence among women was 12.2%. In essence, increased smoking rates cause higher mortality and morbidity costs in Georgia. According to UNDP, 11,400 people die annually from tobacco-related diseases in the country, while the total associated economic costs account for 2.4% of GDP.

In March 2020, COVID-19 was declared a global pandemic, followed by strict containment measures in most countries, including Georgia. The lockdowns imposed and the introduction of social distancing radically changed people’s daily lives and their consumer behavior. The purpose of this blog is thus to analyze the impact of the COVID-19 pandemic on smoking in Georgia.

THE IMPACT OF COVID-19 ON SMOKING BEHAVIOR: INTERNATIONAL EXPERIENCE
According to the literature, the impact of COVID-19 on tobacco consumption varies across countries. For example, according to a study conducted in the Netherlands, 67.7% of smokers reported that the number of cigarettes they consume has not changed since the beginning of the pandemic, while 18.5% smoke less, and 13.8% smoke more. Another survey conducted among American adolescents showed that in 51.7% of cases, smokers’ behavior remained unchanged, 20.7% reduced and 27.6% increased smoking. Similar, equally unclear, impacts were observed in Belgium and Australia.

However, in some countries, the beginning of the pandemic was marked with a notable increase in intensity among current smokers. For example, one study in Poland found that 45.2% of users were smoking more during periods of lockdown. In New Zealand, an online panel survey from a demographically representative sample found that 45% of smokers increased and only 16% decreased the habit during the 2020 COVID-19 lockdown, with no changes observed in the remaining 39%. Correspondingly, according to a survey conducted in Italy, 30% of smokers had on average 5.6 more cigarettes per day, with only 18% reporting less smoking on average, by 4.1 cigarettes per day.

The existing research also evaluates the impact of COVID-19 on smoking cessation. Of Dutch smokers, 33.8% stated they are more motivated to quit smoking because of COVID-19. Notably, these smokers consider COVID-19 to be a serious health risk, more specifically, they believe smokers have a higher risk of infection and that the disease causes more severe complications among smokers. However, in America, the fear of COVID-19-induced health complications, in turn, reduced the likelihood of quitting smoking, and was in actuality positively associated with an increase in smoking according to recent empirical evidence. The international experience therefore highlights that the fear of COVID-19 may push some smokers to reduce smoking or motivate them to give up, conversely however, deteriorating mental health (stress, depression) may actually encourage smoking in others.

THE IMPACT OF COVID-19 ON TOBACCO USE IN GEORGIA
To reduce the health and economic damage associated with smoking, Georgia implemented radical changes in tobacco control policy in recent years. In 2018, the country introduced a ban on: a) smoking in public places; b) the advertisement of tobacco products, tobacco accessories, and devices intended for tobacco use; and c) sponsorship of tobacco companies. In addition, the size of health warnings on packaging increased from 30% to 65%, and large, graphic pictorial health warnings on packaging became mandatory.

Concurrently, the excise tax on tobacco products has been gradually increasing since 2017. According to the Tax Code of Georgia, excise tax consists of two components: (1) specific (SP), expressed as a fixed amount per cigarette pack; and ad valorem (AD), expressed as a percentage of the product’s retail price. Table 1 below presents the timeline, from 2016 to date, of the changes in excise tax on certain tobacco products (in GEL for SP and percentage for AD).

Accessing the effects of the implemented legislative and tax changes on tobacco consumption is difficult as there is a lack of detailed data on smoking behavior in Georgia. Table 2 summarizes the statistics from various sources on the number of smokers in the country, calculated as the share of smokers in the total population. The table identifies that the prevalence of smoking has a declining trend, which might be the result of the policies implemented. This trend was also maintained during the pandemic: in 2020, smoking prevalence in Georgia declined by 2.5 percentage points, while in 2021 it declined by a further 1 percentage point. 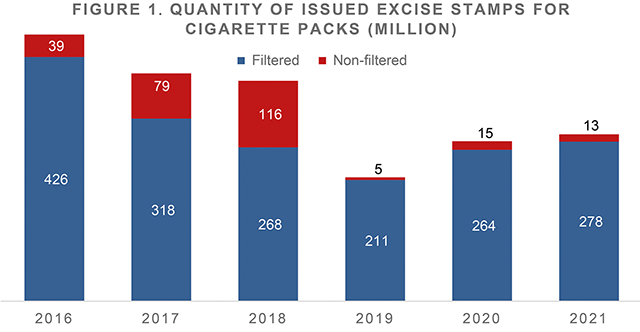 A fall in the prevalence of smoking (Table 2) and growth in cigarette consumption (Figure 1) during the pandemic indicates that while some smokers do give up, others started to smoke even more. Figure 2 shows the average number of pre-rolled cigarettes consumed daily by smokers. According to our estimates, among those who continued to smoke during the pandemic, the number of cigarettes consumed per day increased by 52.2 percent in 2021 compared to 2019. Nevertheless, this still remains lower than 2016-2018.

CONCLUSION
Our descriptive analysis identifies that the number of smokers in Georgia decreased during the COVID-19 pandemic. The literature suggests this may be due to smokers aiming to reduce the additional risk of developing a serious illness from COVID-19. This is paired with the significant legislative and tax changes implemented in Georgia before the pandemic, which seek to reduce the prevalence of smoking. Considering these factors, it is difficult to determine the exact cause of the reduction in the number of smokers between 2020 and 2021.

Conversely though, the number of cigarettes consumed per day during the pandemic has increased, probably due to a deterioration in mental health – the increased likelihood of stress and depression.

Consequently, during the pandemic and in the post-pandemic period, it is important to take further proactive measures to ensure state support for both mental health and the cessation of smoking.
* * *
This research [PHDF-21-740] has been supported by Shota Rustaveli National Science Foundation of Georgia (SRNSFG).