The Geopolitics of Tbilisi 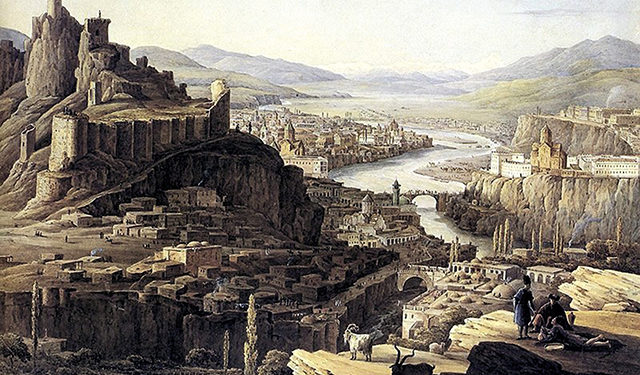 Shaped like a large amphitheater surrounded by mountains on three sides, invading the city was easier than setting up a long term presence.

Tbilisi is one of the oldest capitals in Europe. ‘Tbilisi… is like a Janus: one face towards Asia, and the other Europe,’ wrote the Russian newspaper Zakavkazskiy Vestnik in 1847. Convenient geographical conditions have propelled Tbilisi into being a prominent hub not only between Europe and Asia, but also as a connection point between what is today Russia and the Middle East.

Geography conditioned the city’s urban and commercial development. It also attracted foreign invaders. The city’s central location in the Caucasus made its control a paramount goal for ambitious external powers. From Tbilisi, it was remarkably easier to control Caucasian passes used by barbarians to overrun the country. Tbilisi also allowed foreign troops to reach the western part of Georgia and the region known as Kakheti.

But at the same time, Tbilisi’s topography complicated establishing continuous control over the city. Shaped like a large amphitheater surrounded by mountains on three sides, invading the city was easier than setting up a long-term presence. When the latter was achieved, foreign presence was costly both financially and in term of human resources – Georgians would easily hit back from the surrounding territories, hiding in gorges and mountanous territories. In a way, these physical conditions, favorable for controlling the valleys and repelling external threats, represented a significant obstacle for urban growth, as they continue to do today.

The city is located on the Mtkvari River at its dissection of the Trialeti and Kartli ranges. Located 120km south of the Great Caucasus Mountains, it shares the same latitude as Rome and Barcelona, which lends to the city’s mild climate. However, the climate, topography, and hydrography also give Tbilisi a unique cityscape, attractive panoramas, and peculiar architecture. 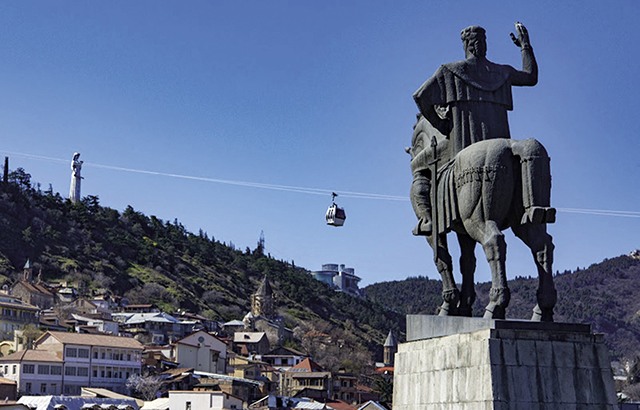 Founded in mid-5th century, the capital of the Georgian kingdom was transferred there from Mtskheta, to become a city with a strategic position controlling the route between western and eastern parts of what is today the South Caucasus. Legend has it that Tbilisi was first founded by King Vakhtang Gorgasali. He is said to have encountered numerous hot springs while hunting in the area – and on downing a hawk which was subsequently boiled through, he decided a new city was to be established on the site. The city-name, Tbilisi, means “a warm place” in Georgian, but there is little historical record to support that particular legend of the establishment of Tbilisi. Archaeology attests that the area around Tbilisi was inhabited well before the 5th century and goes as far back as the 4th millenium BC. Monetary finds of Asian and Black Sea coins on the territory of Tbilisi indicate that the area served as a busy commercial line from well before the transfer of the capital from Mtskheta.

What is certain is that under Vakhtang, the enlargement of the city settlement took place, while his son Dachi is said to have made it a permanent capital. Its new status also meant that the city began to expand and needed reliable defenses. Under Dachi, the expansion of the fortress wall that lined the city’s new boundaries took place. However, it should be noted that the commonly known Narikala Fortress was likely established by Persians in the 4th century as a Sasanian citadel, and was known under the name of Shuris-tsikhe (“Invidious Fort”). It was continuously reworked and expanded by subsequent foreign rulers, as well as Georgian kings of the unified Georgian monarchy. The name Narikala, under which the fortress is commonly known nowadays, is first attested in the work of the German traveler Johann Anton Güldenstädt, who visited Georgia in the 1770s.

Tbilisi was always considered a commercial, territorial and political center of the region. When the Persians abrogated the Kingdom of Kartli, the supreme government of the territory passed into the hands of the vice-regent Shah Marzpan, who used Tbilisi as focal point for governing the region.

From the mid-7th century, Kartli came under Arab rule. The governor of the Arabs, Emir, ruled from Tbilisi and governed the conquered part of Georgia from there. In 735, Murvan Ibn-Mohamed conquered Tbilisi. Arabs imposed taxes on the Tbilisi population. The city’s strategic and economic importance was also underlined in the early 8th century, when the first coin, called the Tbilisi-Arabian drahma, was struck at the Tbilisi mint.

As seen, the city’s strategic location between Europe and Asia made it geopolitically vulnerable as rivalries between Persia, Byzantium, Arabs and nomadic people from the Eurasian steppes were of a continuous character. Foreign domination was a feature of Tbilisi until the 12th c. when in 1121, David Aghmashenebeli re-took the city from the centuries-old Arab control. Thence began a new history of the city: it became into a veritable commercial hub which was closely linked to the famous Silk Roads which then traversed the Middle East and ran near the borders of the Georgian monarchy.