The EU and CENN Make Tsalka a Promising New Destination 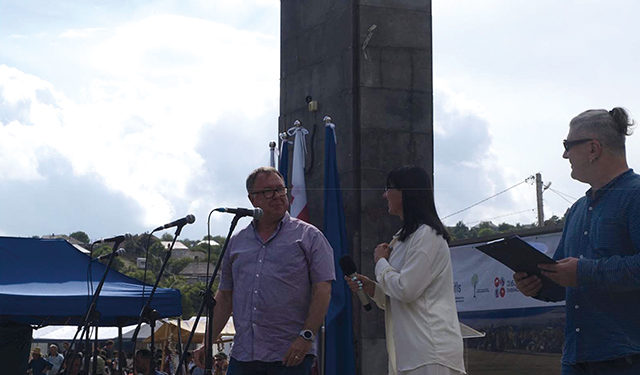 CENN and its partner organizations have organized to support business and growth in the Tsalka municipality. As part of an EU-supported venture, the representatives of local government, agriculture, and businesses came together last week to promote development and drive tourism in the growing region.

Back in March 2019, the European Union, together with CENN, officially launched a rural development project in Tsalka, ‘EMBRACE Tsalka,’ aimed at providing support to smallholders, entrepreneurs, women, youth and other local actors by improving access to knowledge and innovation, introducing best practices, creating public-private partnerships and business links, as well as generating new employment opportunities by utilizing the development potential of the area.

The project is part of the EU’s ENPARD program supporting agriculture and rural development. Since then, the ‘EMBRACE Tsalka’ project being implemented by CENN has significantly improved the socio-economic situation on the ground and contributed the development of tourism potential of the Tsalka Municipality.

As part of the project, a Local Action group (LAG) was established in Tsalka, which has been working tirelessly to improve the conditions of locals and establish higher standards of living across the municipality, which was already known for its ethnic diversity and agricultural opportunities.

Local business and public projects are prioritized by Tsalka LAG and financed in line with the Local Development Strategy to create employment and livelihood opportunities, especially for a poor and marginalized population, while socioeconomic integration of vulnerable households is improved by empowering women and youth.

Thanks to the grants received as part of the ‘Embrace Tsalka’ Project, locals with interesting business ideas have managed to grow and develop both personally and as business people, opening new tourism and agricultural facilities across the municipality and sharply changing the overall picture of Tsalka for the better.

Georges Dehoux, Program Officer for Agriculture, Fisheries and Food Safety with the European Commission, presided over last week’s event to celebrate Tsalka’s achievements. He said the project is not just the “responsibility of the private sector and the government” bringing all components together, but rather all peoples in the region. Tsalka, an exceptionally diverse region already, stands to grow further with this initiative.

The town of Tsalka is a very unique look into the ethnic diversity that many southern towns have in the region. With less than half of the population ethnically Georgian, the rest is Armenian, Caucasus Greek, and Azerbaijani, for a total of around 2,400 people living in the local area.

It has a unique population and cultural affinity to the Greeks, with over 90% of the population being Greek prior to 1990. This influence is still here, demonstrated by Greek letters and signage visible in some businesses. With the immense agricultural development, the increasing commercial presence, an eager workforce, and this week’s opening of an international standard glass bridge over Dashbashi Canyon (funded by Israel’s Kass Group), the town is ripe for further investment and expansion.