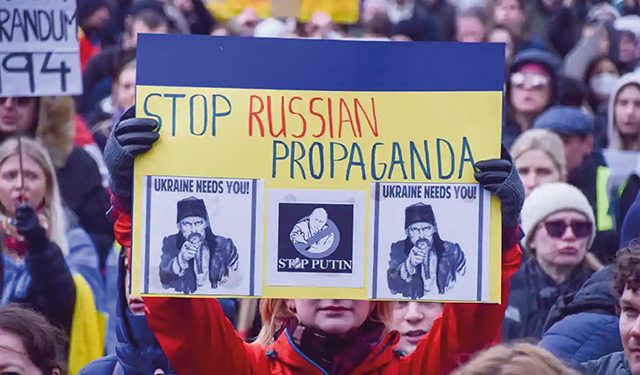 Uncanny things are happening in the seemingly peaceful, intellectually balanced and fairly organized world of the 21st century. Take, for instance, the Russian-Western martial clash on the territory of Ukraine, waged with the hands of Russians and Ukrainians. There was talk before about a war in the region, but nobody expected the outbreak so quickly and violently, and now there is likely not one person in the world of eight billion people who can say for sure when and how it might end.

Some experts optimistically persist that nothing will change, and the war will continue raging until it becomes clear that the Ukrainian effort is altering the political system in Russia. Yet, the selfsame experts emphasize pessimistically that they cannot guarantee this as possible any time soon. In the divided world, some think that Ukraine has done a wonderfully professional job, having taught the surprised Russians a couple of great lessons in military art, so much so that they will no longer mock their “little brothers” for weakness.

And of course there are some out there who are stubbornly convinced that the possibility of Russia losing this war is zilch. From the publicly accessible information, a conclusion is extremely hard to make. Yes, the Ukrainians are advancing. This is what we read and see in the media, but it is difficult to say how firm or fragile those slow sporadic steps are, or if they are stable at all. As such, premature celebrations seem to be clearly precarious.

The war will certainly end someday, but how? Will there be a winner and a loser? I personally doubt it. All of us, just all of us, the whole world, will lose in the end, especially if those outrageous nuke-talks come true. Thinking that the victory of either side will make the world a better place is mistaken philosophy.

The best way out might be by weighing the situation in subtle details and coming up with the fairest possible deal to keep both sides from losing face (and do this ASAP!). Otherwise, we’ll be facing nukes as part of our shortened lifetime.

Most of the actively functional political scientists, and of course the working politicians themselves, want to develop the notion that the use of the nuclear capabilities by this generation of Mankind is impossible, because the reasonable model of thinking in the world today is based on the famous idea of perpetual deterrence. Mistake! The current Russian-Western (don’t call it Russo-Ukrainian for God’s sake!) clash is a pure prerequisite for turning the world into a much worse place to live, based on our impotence to take the bull by the horns and effectively handle the most complicated impasse the world has ever seen, with the sides of the conflict as stubborn as mules, digging in their heels so that they might never be able to pull them out of the frozen muck.

This war is not like any other in history. All parallels are flimsy and irrelevant. This is a very specific war with a perfunctorily deliberated past, present and future. That is why it has to be handled in a very specific way, taking into consideration its deep roots, reasons and ramifications. Most of the stories told about the conflict seem to be done hastily and with little justice. Any biased prediction of the finale of this tragedy might turn out erroneous, so let’s not hurry. The promotional encouragements thrown in randomly and with artificially worked-up enthusiasm might do a disservice to the possibility of ending the conflict soon and in everybody’s favor.

Where a certain Western mouthpiece announces that Ukraine is emerging victorious, the Kremlin promoter is deafening us through its own megaphone that Russia will never give up. Neither is 100% believable, and they know it well, although they both make their share of propaganda with as much zeal and speed as they can muster. Meanwhile, lives are being wasted, and there is no way to stop it at this time.