BLOG by Tamar Beruchashvili, Ambassador at Large on the Black Sea Affairs

I assumed my responsibility as Ambassador at Large on Black Sea Affairs in August 2021, with a special mission to activate the diplomatic efforts of Georgia on Black Sea related issues in the region, as well as with strategic allies like the US, EU and NATO, to foster interconnectivity and cooperation on security challenges.

It is a very interesting function, firstly, because of the importance of the Black Sea for Georgia today and, secondly, because of its multidimensional nature that includes politics, security, economy, transport, environment, maritime education and other areas.

The Black Sea is our future, our window to Europe; the bridge that we have to use for more connectivity, more business and trade with our European partners and the rest of the world.

The Black Sea has enormous potential for our country, which needs to be better exploited and promoted, and I believe Maritime Diplomacy could be a very effective tool for this purpose.

I was doing exactly that during the last five years in my capacity as the Permanent Representative of Georgia at the International Maritime Organization (IMO), which is the UN specialized agency with responsibility for the safety and security of shipping and prevention of pollution of the marine environment.

The IMO is an important international platform for a small maritime nation like Georgia, one that strongly believes in multilateralism, rules-based order, and which fully supports the engagement of international institutions for “peaceful use of the seas”. Unfortunately, we still see the illegal practices of others entering closed Georgian maritime sectors adjacent to the Russian-occupied Abkhazia Autonomous Republic, which is considered a violation of Georgian sovereignty and territorial integrity.

Georgia has been a consistent and steadfast partner in promoting peace and stability in the region. A secure Black Sea is of vital importance for Georgia’s democratic development and implementation of its European and Euro-Atlantic integration objectives.

During my tenure, we made great progress in promoting Georgia as an emerging Black Sea country with great maritime potential, committed to an international rules-based system. I was honored to serve as the IMO Vice-President from 2017 to 2019.

These achievements would not have been possible without active cooperation with the dynamic, highly professional and motivated team of the Maritime Agency of Georgia, with whom I have developed close professional and personal connections.

Right now, it is critical to take full advantage of our geostrategic location and further energize our bilateral relations, as well as to work together with strategic partners and key regional allies to establish a cross-cutting regional dialogue around a shared understanding of Black Sea security.

As a first step, I started active consultations with diplomatic missions in Georgia, and established dialogue with relevant line ministries. There is high interest from our partner country ambassadors to explore cooperation opportunities related to the Black Sea. The recent joint visit to Batumi with HE Ambassador of Norway to Georgia Helene Sand Andersen was an excellent occasion to learn about recent achievements and look into potential areas for future bilateral maritime cooperation. Together with representatives the of the Maritime Agency and the Ministries of Environment and Agriculture and Education and Science, I regularly participate in the work of EU supported programs and projects on the Black Sea, such as the Common Maritime Agenda (CMA), Bridge, Connect, and others.

We also formed a special Task force in the Ministry of the Foreign Affairs to start working on Georgia’s first Black Sea Strategy. This is an extremely important endeavor to develop a comprehensive document presenting the priorities of Georgia in all related domains. I hope our attempt will be successful.

The Black Sea as a region of geopolitical significance, has been a long-standing area of contest among great powers. As a crossroad linking Europe, the Middle East, and Asia, it features strategic lines of communication, trade and energy transit routes. Today, that political geography has changed dramatically, with Russian forces partially occupying the territories of two NATO partners – Georgia and Ukraine.

Georgia has been a consistent and steadfast partner in promoting peace and stability in the region. A secure Black Sea is of vital importance for Georgia’s democratic development and the implementation of its European and Euro-Atlantic integration objectives.

Currently, the Black Sea is one of the most vulnerable areas of the allied territory, being constantly challenged by direct Russian military subversion, political and economic pressure, including a vast range of hybrid warfare instruments. Moscow’s provocative moves in the region indicate its determination to further challenge the West in the Black Sea.

Much is at risk in the Black Sea region today: the security of allies and partners that have stood together with NATO troops globally; the future of the countries in view of Russia’s aggressive attempt to keep sovereign states in its perceived sphere of influence; and the future of the international rules-based order.

The Black Sea region is also the gateway through which Caspian and Central Asian energy sources reach Europe. So, stability and security are critical for safeguarding and developing new large-scale projects to insure more connectivity, more trade and more business that would bring more resilience to the region.

In the face of these challenges, there is good news: The Black Sea is gaining recognition, and NATO and EU members have begun to approach the region more comprehensively by strengthening security cooperation and collective defense.

Since 2018, as a result of decisions made at NATO Summits and Foreign Ministerial meetings, the Alliance has enhanced its practical cooperation with Georgia on Black Sea security. The Standing NATO Maritime Groups, the UK Royal Navy and US warships make regular port calls in Georgia’s territorial waters, highlighting an important relationship between NATO allies and their special partner in the Black Sea. In addition, systematic joint exercises and trainings enhance Georgia’s interoperability with NATO. Moreover, Georgia is actively engaged in strategic discussions with NATO on Black Sea security, and regularly shares relevant information and analyses of the current situation in the region.

There are also initiatives boosting investments in infrastructure and connectivity, like the Three Seas Initiative. But much more has to be done, especially from the perspective of Georgia.

Considering Russia’s growing military posture and the worsened security environment in the region, further enhancement of Western engagement in the Black Sea is of outmost importance. NATO is the only force that is able to build a proper defense and deterrence posture against Russia’s malign activities in the region.

Allies, with increased US engagement, should develop a comprehensive strategy on Black Sea security, which has to be reflected in the upcoming NATO Strategic Concept.

The importance of the Black Sea for Georgia lies in its multidimensional nature that includes politics, security, economy, transport, environment, and maritime education

On the background of the current geopolitical confrontation and the unprecedented threat to European security and stability, the strategic relevance of the Black Sea is more evident than ever. It is important that the NATO and EU investments in the security and stability of the region mirror this strategic significance. Georgia is highly committed to strengthening its role as a proactive contributor to Black Sea security. The Western unity and relevant response to the aggressive strategy of Russia will play a significant role in determining the future of the rules-based international order and whether Europe will be whole, free, and in peace. 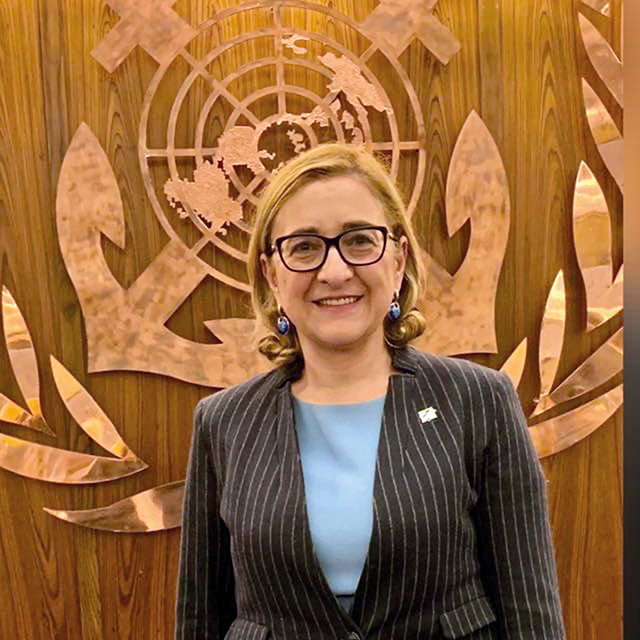 Support and Development
The Government of Georgia continues to support the maritime sector, in line with the post-pandemic economic recovery plan, where the maritime transport sector plays the key role. One of the main priorities is to establish Georgia as a functional and reliable maritime hub in the region. That role was especially highlighted during the pandemic, as Georgia served as a transit gateway to the Black Sea, providing an uninterrupted supply of goods and medicine for the landlocked countries of the region.

Development of Georgia’s Black Sea potential will seriously contribute to the economic and social development of the whole country. Georgia has been boosting its maritime sector – foreign investments are being attracted and promotional activities are being carried out to get more young people interested in this field.

In recent years, the Georgian maritime sector has been growing more competitive. We hope to attract additional investments in the marine sector as we upgrade our physical and digital maritime infrastructure. Significant tax incentives for international ship-owner and ship-management companies, as well as ship financing support for rebuilding our domestic fleet, are among our most recent measures.

Currently, Georgian seafarers are operating on ships sailing under the flags of different countries. There are about 13,000 seafarers in the country, whose contribution to the budget is around half a billion GEL annually. Today, the professional qualifications of the Georgian seafarers are recognized by 56 countries, including 20 EU member states.

Further modernization of maritime education and training are in special focus. Last year, a new maritime school was established in Poti, which will greatly contribute to the development of the human resources not only of Georgia but also of our neighboring countries. Georgia has an ambition to establish the center of maritime excellence on the Black Sea in close cooperation with strategic partners and the IMO.

The support of the European Union to the Georgian maritime sector has to be highlighted. The Georgian government and the EU jointly have set as a priority the reinforcement of EU-Georgia transport connectivity over the Black Sea. As the Head of the European Union delegation to Georgia, Ambassador Carl Hartzell, rightly said: “The Black Sea does not divide the EU and Georgia, but unites us. Georgia has the potential to develop into a hub between Asia and the European Union. It is for this reason that we are supporting sustainable, rules-based and secure transport connectivity between the EU and Asia.”

Within the framework of projects funded by the European Commission and the European Maritime Safety Agency (EMSA), Georgia benefits in terms of both human and technical resources. The mission is clear: quality implementation of EU standards in the field of maritime transport. As a result of efforts of the Georgian Maritime Agency and all stakeholders involved, 91% of Georgia’s obligations under the EU-Georgia Association Agreement are being met regarding the harmonization of legislation and introduction of the European norms and standards in the maritime field. With the support of the EU, in the near future, for the first time in our history, the country will have a Maritime Transport Strategy. As Tamar Ioseliani, Director of the Georgian Maritime Transport Agency said: “This will allow Georgia to have a strategy for the short, medium and long term, which will enable it to become a leading maritime country.”

Currently, the EU and Georgia are cooperating on the development of regular freight ferry feeder transportation links, and re-enforcing energy efficiency in Georgian ports.

In parallel, the US International Development Finance Corporation (DFC) is supporting the expansion and modernization of the Port of Poti, including the development of a new marine terminal that will be able to accommodate large vessels up to 253m in length carrying up to 50,000 tons of cargo. The financing is also supporting additional storage facilities and transportation infrastructure. The new port will bolster trade and facilitate investment in Georgia, while strengthening economic integration in the Black Sea region and creating new jobs. This is a very important geopolitical project and a concrete demonstration of the US-Georgia strategic partnership.

BLOG by Tamar Beruchashvili, Ambassador at Large on the Black Sea Affairs