Speaker: In Order for South Caucasus Region to Serve as Example of Peace, Georgia is Committed to Serving as Mediator between Armenia and Azerbaijan 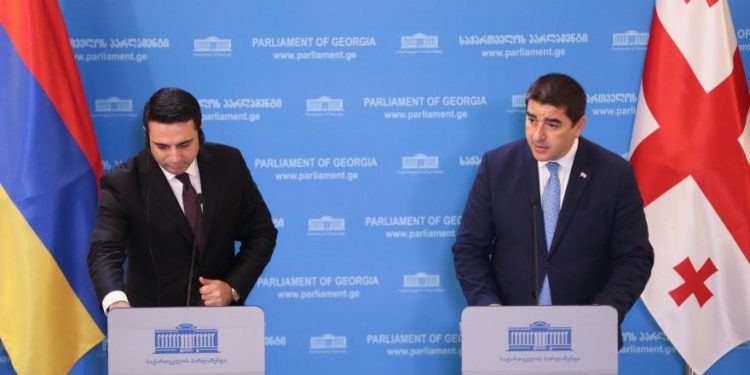 “In order for the South Caucasus region to serve as an example of peace and collaboration, Georgia is committed to continue serving as a mediator between Armenia and Azerbaijan. I hope that we can demonstrate to everyone, but especially to our younger generations, that the people of the South Caucasus can forge a peaceful future even in the face of the most challenging issues by exercising wisdom and working together,” the Speaker, Shalva Papuashvili stated after the meeting with the President of the National Assembly of the Republic of Armenia, Alen Simonyan.

The Speaker emphasized the importance of cultural and educational ties between the two countries during the diplomatic relations between the two countries – “The 30th anniversary of the beginning of diplomatic ties between Georgia and the Republic of Armenia makes Mr. Simonyan’s visit all the more significant. For the past 30 years, the friendship and ties between our nations have grown stronger, which has had numerous positive effects for our nations, their populations, and the region as a whole. I’m hoping that over the past few decades we’ve laid a strong basis on which our following generations might live in nice neighborly and fraternal ways.”

The Speaker also noted Georgia-Armenia cooperation in various fields, including at the parliamentary level. As he noted, the memorandums of cooperation signed between the Foreign Relations and Culture Committees of the parliaments of the two countries within the framework of the visit will contribute to the further deepening of the existing rich cultural relations between the countries and peoples – “It is encouraging that a memorandum of cooperation between the committees of the two parliaments was signed during the visit of the Armenian parliamentary delegation. These agreements will help to further strengthen the already deep cultural ties that exist between nations and peoples. The past, present, and future of Georgia, Armenia, and the South Caucasus republics as a whole are intricately entwined.”

The President of the National Assembly of the Republic of Armenia thanked the Papuashvili for the reception and noted that the development of good neighborly relations with Georgia is one of the priorities of Armenia’s foreign policy.

“I’d like to extend my gratitude to Mr. Papuashvili on behalf of the entire Armenian delegation as well as for the invitation and cordial welcome. One of our nation’s top foreign policy concerns is the fostering of positive neighborly ties with Georgia. Establishing strategic ties with Georgia is something we are really interested in doing. The historical bond between Armenia and Georgia is founded on shared ideals,” Simonyan noted.