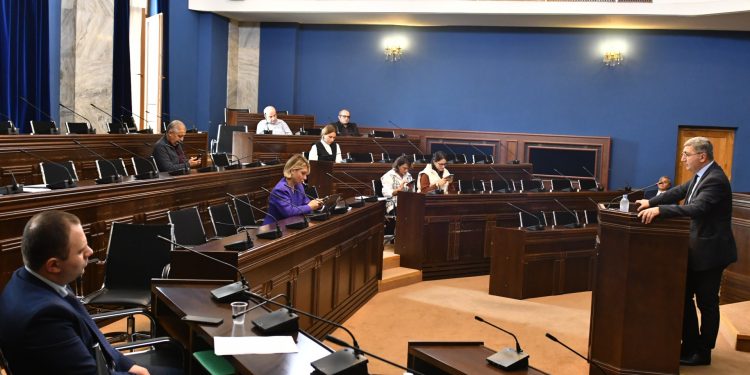 The Committee discussed the Draft State Budget 2023, introduced by the First Deputy Finance Minister, Giorgi Kakauridze. “The Budget of 2023 at most depends on the tendencies in the country and hence, the determination of the financial forecasts for 2023 crucially require the current economic situation,” he noted and dwelt on the fulfillment of the budget 2022, changes thereto stressing that the real economic growth in 2022 for 8 months constitutes 10,3%.

“The Draft Budget 2023 envisages the economic growth of 5%; the nominal GDP index is determined with 79,6 ml GEL and the expenditure part of the mixed budget constitutes 24,3 bl. GEL, which allows us to meet all challenges in various directions.”

The reporter introduced detailed data on all main directions and financing for the state agencies, overviewed the tax incomes, and ongoing and capital expenses, as well as introduced the assignments according to the Ministries. According to him, against the background of the defense and security challenges, the salaries for the policemen and military men are to be increased by 20%, which requires 290,0 ml GEL from the budget; the assignments for the healthcare and social programs are increased with 770,0 ml GEL, including the increased pensions; financing of the Education Ministry is increased with 290 ml GEL and the salaries for the pedagogues and the supervisor officers are increased with 125 GEL; significant allocations from the budget will be consumed on the sustainable economic development; more than 6 bl. GEL will be consumed on infrastructure, and the salaries in the public sector will be increased by 10%.

“The budget deficit and the state debt are the significant parameters of the mixed budget and the deficit in 2022 is reduced to be further declined below 3% compared to GDP. As to the state debt, it will be reduced and constitute 38,8% of GDP”. Speaking about the incomes, the reporter noted that the Draft for 2023 provides the increased total incomes to constitute 21,3 bl. GEL. “We will consider your proposals within the Committees and the final revised version may be further improved, however, the only unchanged record in the Draft is the deficit index, which in the extreme case, we may strive to reduce it,” the reporter added.

After the questions, the Committee approved the Draft.