Saakashvili’s Case Continues to Divide and Distract the Country 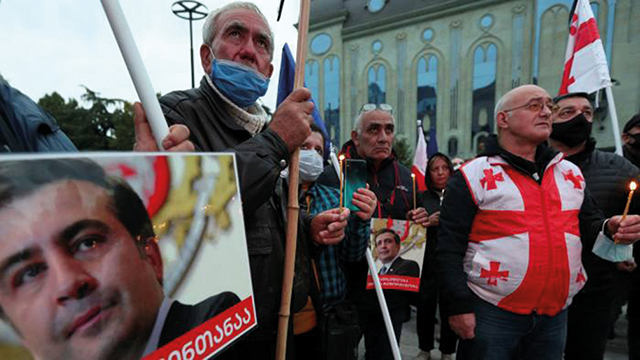 The opposition this week announced its plan to hold a rally in three different locations on Friday.
Nika Melia, the leader of the United National Movement, said that a rally at Avlabari metro station would be led by the UNM, at Station Square by Lelo, and at University by the leaders of Girchi for More Freedom and Droa.

The rallies are scheduled to start at 3pm and are being held to demand the transfer of former Georgian President Mikheil Saakashvili from Gldani Prison’s hospital facility to a civilian hospital.

“It depends on us, the citizens of Georgia, regardless of profession or status. We all have one goal and task to prevent what happened in Russia and Belarus. Russian-style autocracy should not take root in Georgia! We must continue this non-violent protest,” Melia told supporters Wednesday.

Yet the government shows no signs of budging, insisting that Saakashvili is fine where he is.

On November 12, Volodymyr Zelensky, President of Ukraine, called Georgia’s Prime Minister to discuss Saakashvili’s case, reminding the PM that he is a citizen of Ukraine put under arrest in Georgia.
Garibashvili is reported to have told him that, “the condition of all prisoners, including Mikheil Saakashvili, is closely monitored at penitentiary institutions of Georgia, and adequate medical services are rendered to inmates round the clock, 24/7.”

He further emphasized that “Saakashvili is a citizen of Georgia,” and as such “is permitted to accept visitors.” Garibashvili noted that lawyers, family members and members of the Parliament of Georgia have visited him unhindered, and since admission to the penitentiary institution, he has received over 100 visitors.

“President Zelensky touched upon the topic of Mikheil Saakashvili’s transfer to the prison hospital, upon which PM Garibashvili noted that the prisoner in question expressed resistance, along with verbal and physical abuse towards the staff and physicians of the facility,” the government administration reports.

“Accordingly, the administration of the penitentiary institution carried out measures promulgated in the law.

“During the conversation, the Head of Government of Georgia assessed the unlawful behavior of Mikheil Saakashvili as provocative, destructive and threatening to the stability of the country. He also highlighted to the Ukrainian president that citizens of Ukraine have no legitimate right to intervene in the domestic affairs of Georgia.”

“The Prime Minister of Georgia also told the President of Ukraine that fugitive Saakashvili had entered the country by illegally crossing the sovereign border, when he was already convicted and charged for various grave crimes,” the administration wrote.

President Zelensky is said to have inquired whether Ukrainian doctors could be permitted to check Saakashvili’s condition, to which PM Garibashvili assured him that prisoner Saakashvili is “being taken care of by high-caliber healthcare professionals of Georgia.”

“Mikheil Saakashvili’s basic laboratory indicators are normal, other diagnostic tests are being carried out intensively, and his life is not in danger,” Giorgi Chidrashvili, Deputy Head of the Medical Department of the Special Penitentiary Service of Georgia, said on Tuesday.

He explained that the life of the convict Mikheil Saakashvili is not in danger at the 18th medical institution, adding that his condition is stable and his vital signs, such as blood pressure, pulse, respiration and saturation, are normal.

“Key laboratory indicators are also within the norm. He is under intensive laboratory and other diagnostic examinations. Accordingly, he is being provided with appropriate medical services. His condition is under constant control and is not in danger,” Chidrashvili said.

Although Saakashvili said on November 12 he would consider ending his hunger strike, he noted that he will only do so if he is moved to a civilian hospital for treatment and recovery.

“The process of rehabilitation after starvation is much more complicated than the process of starvation management, and Gldani Hospital has neither the technological conditions nor the properly qualified medical staff,” he wrote.

The content of the conclusion was introduced to the media by Dr. Giorgi Grigolia.

“We assessed the condition of Mikheil Saakashvili as critical as he has been on a hunger strike for 48 days,” he said. “He needs intensive treatment. His condition becomes more complicated on a daily basis. All organs are damaged as a result of hunger. The patient needs to receive treatment from multidisciplinary specialists, endocrinologists, nephrologists, gastroenterologists, etc. Unfortunately, the Gldani Prison clinic does not provide their service permanently – they can be called, but they are not present on-site 24/7. In the event of a possible aggravation of the situation, the Gldani Prison Hospital will not be enough,” Grigolia noted.

The European Court of Human Rights (ECHR) on Tuesday this week decided to indicate interim measures in the case Saakashvili v. Georgia concerning the applicant’s health.

“The Court has requested that the Government inform it about Mikheil Saakashvili’s current state of health, ensure his safety in prison, and provide him with appropriate medical care,” the ECHR announced.

The Court also clarified that interim measures are urgent measures which, according to the Court’s well-established practice, apply only where there is an imminent risk of irreparable harm.

“The applicant, Mikheil Saakashvili, is a Ukrainian national… who has been serving a sentence since 1 October 2021, following convictions for a number of crimes committed while in office. He considers the prosecutions to be “politically motivated persecution” and has been on hunger strike as a result since, a total of 41 days at the time of the current request.

“He has twice been examined by a panel of doctors, who have confirmed, among other things, that he is on hunger strike, taking only liquids and vitamins, and that he has lost 10% of his body mass, although there has been no serious deterioration in his health.

“Mr. Saakashvili went to the courts, seeking his transfer to a civilian hospital, but the request was denied.

“Mr. Saakashvili asserted that the authorities had failed to hand over his medical file, that the prison hospital was not properly equipped to meet his needs, and that his safety could not be guaranteed there. He thus requested, relying on Articles 2 (right to life) and 3 (prohibition of inhuman and degrading treatment) that he be transferred to a multi-specialty civilian hospital, as recommended by the medical panel and the Public Defenders of Georgia and Ukraine. The application was lodged with the European Court on 10 November 2021.

“On 10 November 2021 the Court decided to indicate to the Government of Georgia, under Rule 39 of the Rules of Court, to inform the Court about the applicant’s current state of health, to ensure his safety in prison, and to provide him with appropriate medical care for the post-hunger-strike recovery period. A treatment plan for the applicant’s recovery should also be drawn up. At the same time, the Court urged the applicant to call off his hunger strike. It also proposed that the parties make submissions in two weeks’ time (by 24 November 2021) concerning these interim measures.

“The Court also decided to grant the case priority under Rule 41,” the ECHR stated.

On November 12, Member of the European Parliament Anna Fotyga (Poland), flew to Georgia with the intention of meeting Saakashvili in prison. She was denied entrance. Saakashvili responded via Facebook.

“Fotyga fights ardently for Georgia and is against Putin – it is not surprising she was not allowed to see me, a personal prisoner of Putin,” he wrote, thanking the MEP for her solidarity.

“During the last meeting in Strasbourg in September, Anna Fotyga asked me if I thought I would be a victim of torture after returning to Georgia. I replied that I did not think so.

“Anna Fotyga was the Minister of Foreign Affairs when Lech Kaczynski came to save Georgia, at risk to his own life. Fotyga is a noble and strong person who fights ardently for Georgia and is against Putin. It is not surprising is that she was not allowed to see me, a personal prisoner of Putin.

“Thank you, Anna, for your humanity and solidarity. I am sure that those who did not let you in will soon not be close to the levers of power and Georgia will meet you with its old hospitality and gratitude,” he wrote.

MEP Fotyga addressed Mikheil Saakashvili following the decision of the Ministry of Justice not to allow her to see the ex-president.

As part of her visit, the MEP met with political party Droa leader Elene Khoshtaria, who is also on a hunger strike in the Parliament building in support of Saakashvili.

“All I can do is to say encouraging words,” Fotyga commented after the meeting.

Mikheil Saakashvili was visited by his American lawyer John Sandweg.

“It’s worrying how he should feel safe here because there is no proper medical equipment. That said, he is in a great mood. You will not encounter a case like this in the US and it is not a case that is subject to criminal law. This is not an institution where he feels safe,” Sandweg said.

He also commented on Saakashvili’s video footage, noting that it was “quite disturbing” how he was treated on entering the Gldani medical institution. Sandweg added that such treatment is “not appropriate.”