Saakashvili on his 54th Birthday: My Choice is Clear – Death or Freedom 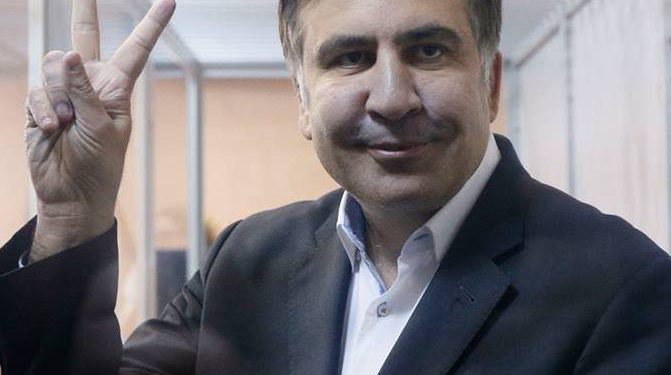 “For me, personally, the choice is clear – either death or freedom, because Georgia will die without freedom and then my life will be pointless,” imprisoned former president of Georgia Mikheil Saakashvili said in a letter on his 54th birthday.

Saakashvili claims there is only one solution to change the government – a tireless struggle.

“I greet you from the prison cell where they placed me because I created a modern state, built new cities, resisted Russian interventions, and did not surrender our capital. I was put here and they are killing me for increasing the economy four times, the budget 12 times, pensions ten times. For bringing back the pride and splendor of Georgia centuries later and for becoming an object of good envy for the whole region. I was persecuted because Georgia, for the first time in history, became a world-class player, and we not only determined our own destiny, but as equals we sat at the table where the destiny of the world was decided and where our word had weight. this could not be accepted by our enemy and our envious, greedy domestic salesman.

“I peacefully handed over power and left this place so that I did not interfere, and the Georgian people themselves would determine their own destiny and choice.

“I went and left solid state institutions, left billions in treasure for development, a very fast-moving economy that had endured inertia, and would last at least a few years.

“I came back because I saw that everything had stopped. Today, the size of the Georgian economy is the same as in 2012. Prices have tripled, jobs have halved, the country is shrinking, and most importantly, our people were deprived of their choice and told that they could not change anything in a democratic way in Georgia, that Georgians have only two choices – wordless slavery or going abroad as a secondary labor force.

“For me, personally, the choice is as clear as day – either death or freedom, because Georgia will die without freedom and then my life will lose its meaning.

“There is only one solution – a tireless struggle to break down the wall of alienation, to find even a little in common with all our citizens, and to achieve results by fighting in the streets, in and around various government bodies. only this will force them to enter into a dialogue and start real elections.

As a result of these elections, we will get a government that will not be for one man, but an expression of all kinds of interests of more than 5 million Georgians scattered around the world. It is in our diversity and love of freedom that our strength and the secret of survival lies.

“Georgia needs rapid development. We will definitely build Lazika and each Georgian will have more income than our citizens in Poland, Greece or Italy have today.

“We are told that protest hinders the development of the country. It is like telling a person who is drowning in a swamp not to move his hand.

“It was announced to us a few days ago that the rejection of the adventurous policy with Russia is the main merit of the usurper government. The same day, the representatives of the occupation authorities announced their plans: The annexation of the Truso Gorge and Upper Racha and the occupation of another 200 square kilometers of Georgian territory, which means that in recent years more territory has been taken away from us than in 2008. But where in 2008 the whole world stood by us, now practically no-one says a word to protect us.

“And why do they not stand by us? Because in the same speech, the oligarch “whatever you want to call him” said that we will not turn to Europe to ask for help. This has been said only because Europe is telling us that robbery, impoverishment, deprivation of rights, political repression by an unjust court are unacceptable. Europe tells us that a European country cannot be the private property of one individual, but must belong to all its free people.

“As one of the main founders of the EU Eastern Partnership, I will fight to the end to ensure that one of the roads under construction does not lead to Russia. But also we will have Lazika, new airports that will primarily open the way to the West and other destinations. If you build the only highway in Russia, you give your enemy the key to shut you down at any time, which they have done many times in the past.

“There is no alternative to a solid Euro-Atlantic course – now Georgia is not going anywhere, therefore goes to Russia. Russia has deployed its representatives in our intelligence services, in the armed forces. Everywhere in the state apparatus and even in the church.

“Our path is Europe and only Europe. As the person who first officially established and raised the EU flag, which the Fifth Column is trying to lower and has even managed twice, I say that in Georgia’s freely elected parliament, where there will be a coalition government, all laws must pass the EU compliance filter. With experts appointed by the EU and only then to vote.

“True self-government has to be introduced in Georgia, where no cent will be spent without the control of each citizen. judges of the first instance and local police chiefs should be elected by the local population and should be accountable to them. then they can no longer raise their hand against their own people.

“From a democratic, free Georgia, no one would want to leave, because the income of citizens will increase immeasurably, the national wealth will be fairly distributed and an environment will be created to increase the comfort and security of our children, new generations.

“I came to Georgia to save Georgia and I believe in a very successful future for my country, but this future can only be achieved through struggle and I will stay with you until complete victory!”, reads the letter.

For the record, today, December 21, marks the birthday of the third President of Georgia.

On this occasion, at 18:00, a rally demanding the release of Mikheil Saakashvili organized by the United National Movement will be held on Rustaveli Avenue.