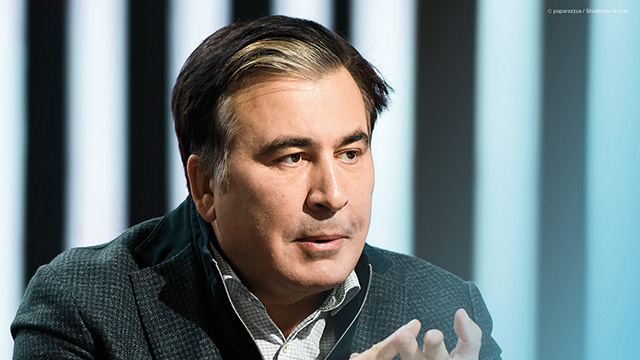 After Former US Ambassador to Georgia Ian Kelly heard the news that the Georgian government had no plans to transfer Mikheil Saakashvili, on hunger strike for his 50th day, to a civilian clinic, he responded on Twitter, “Just take him to a damn civilian hospital!”

Third President of Georgia Mikheil Saakashvili was last Friday said to be in critical condition in Gldani Prison Hospital. His lawyer, Beka Basilaia, announced on Thursday that Saakashvili had lost consciousness and was recovering in the hospital’s ICU.

“I cannot assess from a medical point of view, but he was in a very serious condition. When he fell, before the stretcher was brought down, he was in a very serious condition. He was coming out of a meeting with lawyers, and when he came out of the room, he fell to his knees. Then a stretcher was brought in a few minutes later,” Basilaia told journalists.

“There was an episode of loss of consciousness and now the patient is in an absolutely stable condition: oxygenation, respiration and other parameters are normal,” the doctor told journalists soon after.

“Just take him to a damn civilian hospital, at long last,” Former US Ambassador Ian Kelly wrote on Twitter that day. “Saakashvili has said he’ll end his hunger strike if he’s taken to a civilian hospital. Put a perimeter fence around it if you’re worried about unrest. Just do the responsible thing and do it,” he tweeted.

That afternoon, recovering in Gldani Prison’s ICU, Saakashvili agreed to be transferred to Gori Hospital and to end his hunger strike as soon as he was taken there, on the condition that the post-starvation protocol be written by specialists and a daily report be provided about his condition.

Following the transfer, on November 22, his personal doctor Nikoloz Kipshidze announced that the treatment process was going well, but needed care, and suggested he be released from imprisonment.

“He needs long-term rehabilitation of various organs- brain, liver, etc. Maybe we should release him and let him be treated normally,” Kipshidze told journalists after visiting Saakashvili in Gori.

He said the president is thankful to the hospital and liked the staff very much.

“He feels comfortable, but in my opinion, treatment in such conditions is impossible for such a patient. His rehabilitation will be very long. Therefore, my sincere opinion as a doctor, which my colleagues may not agree with, or the Georgian population, is to allow him to be treated outside prison,” he said, adding that he meant free treatment, without the attendance of prison guards.

Giorgi Papiashvili, a doctor and a member of the expert group set up by the Public Defender, says that there is no medical basis for releasing Saakashvili.

Further, doctors Elene Giorgadze and Ineza Sulamanidze, members of the medical council, visited the third president of Georgia at the hospital.

Other opposition MPs on hunger strike, including Droa party leader Elene Khoshtaria, and renowned Georgian opera singer Paata Burchuladze also stopped their hunger strikes. They are all currently in a stable condition and are undergoing the relevant treatment.

On Thursday, Saakashvili wrote to his supporters via social media, encouraging them to continue the political fight and to form a campaign for his release.

“By taking me hostage, by completely banning public relations, by deliberately violating all my legal rights, I am given no opportunity to engage the Georgian people in the decisive struggle against the dark Russian regime. In Ivanishvili’s court, I have zero chance of finding justice,” he wrote.

“I do not see myself in any configuration of the future government. By taking me hostage and banning public relations, Ivanishvili, I think, is not only seeking revenge on me but also significantly hindering the formation of a new, coalition government through early elections, we should not allow this.

“The coming weeks are very important. If we consolidate, maintain political momentum, multiply and fight principally and selflessly, we will achieve everything. Get everyone involved. Those who cannot come to protest, help the demonstrators with food.