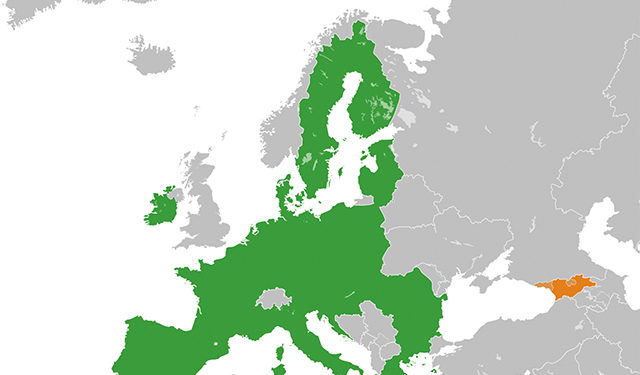 A pressing issue for Georgia now is a speedy transformation of a lukewarm activity of the West into a proactive one. Russia’s demarche and its far-reaching implications virtually eliminate a possibility for our partners to continue staying in a “comfort zone” in post-Soviet space. The West – as we have historically known it and accepted by publicly declaring it as a modern Georgian civilizational choice in the 1990s – must take a principled decision now. In particular, it must decide whether it continues only making supportive, at this stage already out of context statements and declarations, providing targeted financial injections and relatively limited programs for strengthening our defense capacity or turns around this rather dull, not-oriented-on-tangible-result process to save our country from falling into a geopolitical abyss. Keeping the Georgia issue “hanging” for various reasons, leaving it untouched because of influence of actual “red lines,” giving one and the same excuses for not taking “risky” decisions, etc., make the West an involuntary accomplice in the Russian scenario. This might explain the Kremlin’s moderate tolerance of pro-Western initiatives as well as Western influence in Russia’s neighborhood until a dividing line critical to Russia’s “vital interests” is not crossed. It should be noted, however, that by its recent demarch, Russia has already crossed this line. This, in turn, will now force the West, unexpectedly for it or at an inconvenient for it time, to drag itself out of geopolitical lethargy and take a principled position in relation to Georgia and even more so, demonstrate that by deeds because the expression of support through “impressive words” or “targeted programs” will, leaving aside unpleasant historical parallels, be assessed as, at least, hypocritical flirtation; even more, a historical opportunity to strengthen its position in the region for the West and a full realization of its choice for Georgia, will be reduced to future abstraction.

A Need to be Said
We will refrain from more specific recommendations or sound advice and would also ask others to refrain from boldly giving any either. Taking about security, regional challenges and international positioning of our country is such a responsible action that it may take place only in such a discursive regime that is free from taboos and restrictions as well as benign “exclusivity” and is oriented on persuading or dissuading by reasoning and discussion. It is also necessary to conduct discussion of such sensitive topic (without infringing permissible openness and public interest) without the involvement of media. This will only benefit the quality of discussion and improve the qualification of discussants.

The above few reservations serve the aim to free us from restraining ourselves to express opinions and to argue.

Let’s start with the fact that the extraordinary geopolitical order around our country requires communication with our partners and stakeholders in an extraordinary regime. We must know what they want! They must know what we want! We must know what we expect and demand from one another! Such communication allows not to mince words and this may be even inevitable. Without a direct, comprehensive, sometimes uncompromised or reasonably compromised exchange of opinions it is impossible to act in a manner that is pragmatic, consistent and tailored to national interests.

In conversation with its partners, Georgia must necessarily establish a practice of receiving direct answers to direct questions: how and in what timeframe, in particular, is the West ready to formally complete the process of integration with us? Does it face an objectively obstructing barrier? Is it able to overcome it and what are we required to do for that?

These and other questions can, of course, be further elaborated. The key is not to shy away from raising those questions and receiving answers to them – one cannot imagine a true partnership otherwise.
Along with direct communication means it is necessary to employ all channels, that are available and have not been used so far, at every level – be it personal, quasi-institutional or any other. That is how a modern “transactional” politics is, unfortunately (?), done; thus, less “traditionalism” in approaches and more skilled improvisation for the aim of national security!

Among numerous noteworthy aspects there is one in modern relationship, which sounds in the following way: to be a player, you have to be a payer. In short, the meaning of this phrase is that a necessary balance in relationship can only be achieved by reciprocity. Thus, knowing what we can give, we should also know what they can give to us – what are the resources and willingness for that. Otherwise, it will be difficult to make a result-oriented advancement in any relationship.

Escalation or de-escalation?
By the time of finishing this paper, both possibilities are theoretically equal. Clearly, if we apply conscientious diplomatic principles (which will not cite a further escalation as an excuse and threaten with “thwarting negotiations”), the crisis can be overcome through reasonable mutual compromise. It is also a fact that concrete parameters of possible resolution of the crisis are unknown for the moment, but the US State Department has already outlined some of them.

In any case, the Western world and especially, the United States as well as the Russian Federation must be driven by two motives for negotiations. One is a threat of kinetic confrontation which in case of degrading, intentionally or unintentionally, into a nuclear conflict will automatically exclude winners and losers. Another is that a disagreement between Americans and Russians will further strengthen China’s global influence, which is not in either a declared interest of Washington or undeclared interest of Moscow.

It is equally important to note that in the relations with Russia, the West will have to recall the experience of the Cold War: the created situation and its possible development does not, unfortunately, leave any other option. Furthermore, to better match own capacities with desires, the Western partners will have to take into account two very important factors regarding Russia. One is a “merger” of European economic structure with that of Russia as well as the influence of Russian money on Western political and business circles. It will not be easy to loosen this interdependence, but without a proper regulation of this issue the West will find it difficult to improve a geopolitical weather.

We would like to add yet another opinion to the topicality of this factor. For example, in talks by the West with Georgia (as well as with Ukraine) about so-called de facto Russian veto, we must take into account one very important circumstance. In particular, by submitting the Western political and business processes to Russian economic influence, does the West itself involuntarily facilitate the effectiveness of Russian de facto veto? Could it be that the strengthening of Moscow’s decisive vote with regard to its neighborhood has been facilitated, inter alia, by a fact that the freedom of decision making by the West has been significantly restricted as a result of the abovementioned “merger”?

Another factor, which is rather peculiar and serious, is Russia’s “asymmetric advantage” vis-a-vis the West – to achieve its goal, Russia does not basically and traditionally spare its own human, military or civil resources.

In short, the key actors of the demarche discussed here and along with them, our country, have entered a new and very dangerous phase of geopolitical game. The entry into this phase has further complicated objectives of the Georgian state. The load of several most principled challenges faced by us has been increased by yet another, very weighty challenge: the challenge to succeed that the issues related to the fate of Georgia are not decided without our involvement. Under current conditions, this is an extremely difficult task.

It must also be said say that if it is possible today to speak about even a tiny positive effect produced by the Russian demarche, it is precisely the triggering of discussions on rather uncomfortable but extremely principled questions raised in this very paper. The closer the culmination of events approaches, the higher the topicality of these issues.