Russia’s Political and Military Demarche: More Explicitly on its Separate Aspects. Part I 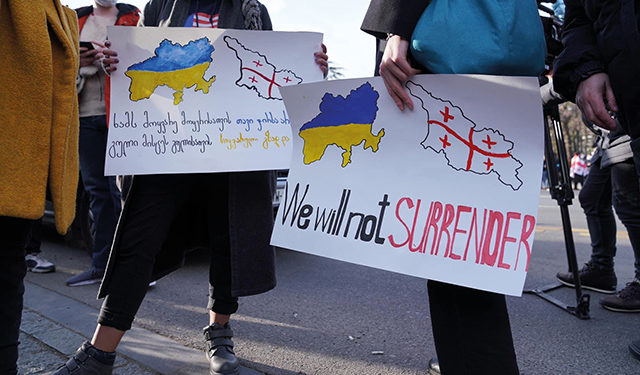 Although it might seem strange, the Russian demarche may have unintentionally only accelerated the issue of Georgia and other similar countries stuck in geopolitical uncertainty

The crisis provoked by Russia, which has even been dubbed “organized chaos,” is a subject of daily discussions and evaluations. Almost all assessments can be summarized in one key message: Moscow is trying to radically change the essence of the order that took shape, first, after the Second World War and then, after the end of the Cold War, in order to turn the balance of Euro-Atlantic power to its own advantage and make fundamental changes to the code of conduct in international relations by openly introducing power in it as a dominant component. That open and dangerous revisionism, as well as the undermining of the abovementioned, to put it mildly, imperfect model, having emerged after the aforementioned wars, takes place at the expense of Russia’s neighboring countries. Our intention is to discuss the “old-new” reality of this very neighborhood, of which Georgia is part, and to draw out conclusions that will be neither pleasant nor acceptable for all.

Without an exact name?
Controversial has been a word (and a rather mild one) used to describe the reality around our country. We will try to explain why.

For many years, Georgia has continued to exist in uncertainty and to advance along the path of its civilizational choice. This path, which is marked both with achievements and failures, is distinguished for the strength of national consensus and a societal decision to see the country becoming a fully-fledged participant of European political unity. Our journey along this path is supported and encouraged by Georgia’s partner countries. Nevertheless, we must admit that something in “our” and “their” movement towards each other does not fit ideally. The question is where is that critical point of divergence which despite a very long section walked through by both parties, makes the prospect of finishing this path so distant that it is impossible to reach out and firmly clasp our hands. It should be noted that this joint project of Georgia-Euro-Atlantic partnership is, at first glance, flawless both in its form and substance: against their continuous supportive assessments and steps, the Georgian state continues to do, though not always impeccably, its homework and advance towards the set goal. Why does then a segment of supporters of this process feel somewhat dissatisfied? Has the time not come to start openly discussing reasons of this dissatisfaction?

The time has clearly come. Let me remind those thinking that discussion of this issue is untimely that the Russian demarche has left no time and room to either Georgians or our Western partners for “averaged” explanations. As regards an inadequate movement of Georgia and its Western partners towards each other, the reason of it, I believe, is the lack of capacity to take comprehensive (not partial), timely (not delayed), result-oriented (not effect-oriented) decisions as well as the lack of will to implement them.

Against this backdrop and especially, in the situation created by the Russian demarche, the lack of capacity and will harms the joint project of Georgian-Western integration: it may slow down the rate of integration, while in terms of its outcome, may push our country from geopolitical uncertainty into a geopolitical abyss. We still have time left to avoid it, although the Russian demarche has further accelerated the countdown and virtually zeroed the time for extra exchange of useless pleasantries.

Why does it happen as it does?
The existence of our country in a protracted and now already very dangerous geopolitical uncertainty is a result of more complex events and processes in the post-Soviet and post-Cold War period. Today, this topic has already been actively and impartially discussed in Western studies, providing a unique opportunity for interested readers to enhance their mindset.

Thus, the situation that resulted from the recent Russian demarche is not a reverberation of either current moment or of previous year or two. It is an indirect effect of the abovementioned deficit in practical Western politics towards post-Soviet countries in the so called “buffer zone,” which Russia has exploited directly and boldly to strengthen its influence on countries of that zone. Using not only covert but also overt forms of aggression, it has erected actual barriers to the West preventing it from freely entering Russia’s neighborhood, while by taking the current demarche, it tries to obtain a formal consent from the West on legalizing those barriers as “red lines.”

The explanation of the Russian approach does not offer the Georgian audience anything new. The only thing that changes from one demarche to another is the scale of the approach, actors and concrete factual circumstances of covert or overt aggression. However, compared to any previous case, the foreign-military line pursued by Russia since last November is unprecedented by the scale of intent and far-reaching implications of the set objective: Russia demands the consent of the West on the recognition of Russian version of Monroe Doctrine in the post-Soviet space. It demands, not requests.

Possible scenarios of further developments are not a topic of this paper; instead, we want to draw your attention to several of those aspects that brought us and our partners to the current crisis. The key question now, in my opinion, is: What has our joint integration project “done so wrong” that must be necessarily and quickly rectified in order to escape a more severe and damaging consequence for the project?

Two sides of the same coin: as always
Thus, neither history nor practice tells us anything new about Russia’s “political taste” and way of action. Consequently, it is more interesting to analyze Western elements of equation which has been finally exposed as a result of the recent demarche.

The use of word “equation” is not incidental because I would compare the Western-Russian interaction in the so-called “buffer” neighborhood to a “seesaw” type equation. It is this strange equation that largely causes that dissatisfying uncertainty where Georgia and the West, against specific attention, supporting statements and declarations of concerns from the West, have been moving in parallel with the formal Rubicon of Georgian-Western integration for many years now but have not been able to cross that Rubicon yet.

It seems that Moscow is not very concerned about such “parallelism” between us and the Western partners; this tolerance by Moscow may be also explained by the following: in the conditions of politics that is constantly deficient for achieving the abovementioned principled and tangible result, Russia expects (expected?) that statements of the West about full and not partial integration with the West will lose a reputational power, while Georgia and other countries that pursue a pro-Western course will get tired of doing never-ending homework for integration. That will make it easier to absorb Russia’s bordering countries into the unrecognized-by-the-West “sphere of influence” of Moscow. The current demarche has added yet another puzzle to this unfavorable-for-us equation: Does Russia think that the time has come for a decisive phase in the process of discreditation of the West and fatigue with the West in Georgian, Ukrainian or other societies? This totally non-rhetorical question requires a practical answer from the West, even more so, today and now. Although it might seem strange, the Russian demarche may have unintentionally, by giving such answer, only accelerated the issue of Georgia and other similar countries stuck in geopolitical uncertainty. If we agree that it has accelerated, it now becomes interesting as to how and with what result.

Impossibility to stay longer in a “comfort zone”
Separation of impressive speech and politically effective action has become an ailment of our time and political culture (or lack of culture). In the past few decades, this ailment which is called real politics but in colloquial language “trading,” has gained ground in the field of international relations. We should get used to such transformation of global politics, adjust to it and confront it with our own, national political-diplomatic antidote. We would advise those in the Georgian society who still do not admit it to step aside and clear the way for those who have already realized that universal idealism has been replaced by conjunctural pragmatism, while the politics of values has cleared the way for the geopolitics of influences and interests, even more so, much more openly and unabashedly than ever before.

Such description of the current international arena is, by the way, a direct result of changes that have taken place in Western politics since the first decade of the 2000s, while a number of leaders of the 21st century may claim the co-authorship of the rules of the game.