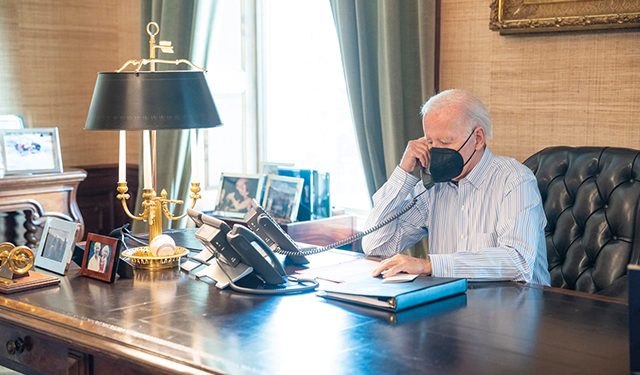 In the 22nd week of Russia’s aggression against Ukraine, the key developments are as follows:
• Russia is preparing its forces for an attack on the southern battlefront, Ukraine says
• The first grain ship to leave Ukraine under the new deal heads to Lebanon
• The US Senate is poised to vote to accept Sweden and Finland into NATO
• The US imposes a new round of sanctions on Russians
• Biden speaks with the national security team about additional weapons for Ukraine

The Russian Army appears to be massing forces for an attack along the same southern battlefront where Kyiv’s troops are planning one, the Ukrainian military warned on Wednesday.

“The enemy continues to wage hostilities along the occupied defense line,” the command said in a statement. The Russians are assembling troops for an assault, it said.

In the eastern Donbas region, Russia has been slowly advancing, while in the southern Kherson region, Ukraine has been recapturing territory with the help of long-range American-provided rockets striking ammunition depots, command posts and bridges deep behind Russian lines.

The strikes on bridges over the Dnipro River, which separates Kherson from Russian supply lines to the occupied peninsula of Crimea, had been seen as particularly hopeful for Kyiv. The Russian Army has begun using barges to cross the river.

But the massing of an assault force in the northern portion of Russia-occupied territory around Kherson would pose challenges to Ukraine’s plans. The Operational Southern Command said Russian troops staged probing attacks with tanks, but did not break through Ukrainian lines.

In eastern Ukraine, the fighting has settled into a stalemate of Russian advances in some areas and Ukrainian counterattacks in others, with neither side moving more than a few kilometers over weeks of combat.

The Russian military has turned to its air force to try to break the deadlock, said Serhiy Haidai, the head of the Ukrainian regional administration of Luhansk Province. On Tuesday, Russian planes attacked eight villages and small towns along a front near the administrative border between Luhansk and Donetsk Provinces, he said.

The attacks, Haidai suggested, were intended to pin down Ukrainian troops in the east, preventing them from being redeployed to other areas in Ukraine, like the south, where Ukrainian forces are preparing for a counter-offensive.

In the north of Ukraine, Russia attacked the city of Kharkiv early Wednesday morning, launching missiles from across the border near the Russian city of Belgorod, according to a Telegram post by Oleh Synyehubov, the military governor of Kharkiv. There were no immediate reports of casualties.

THE FIRST SHIPMENT OF GRAIN LEAVES UKRAINE SAFELY
The first shipment of grain exports from Ukraine in months safely reached anchorage in Turkish waters. The shipment was inspected there Wednesday before carrying on its journey to Tripoli in Lebanon. The Sierra-Leone flagged Razoni departed Odessa on Monday, with Zelensky calling the shipment a “positive signal.”

The US Adds Sanctions, Sets to Decide on NATO Accession
The United States slapped more sanctions on Russian oligarchs on Tuesday, as the US Senate moved closer to a vote to admit Sweden and Finland into the NATO military alliance.

NATO’s 30 member countries are in the process of considering the addition after Sweden and Finland set aside their longstanding stance of military nonalignment. It was a major shift of security arrangements for the two countries after neighboring Russia launched its war on Ukraine earlier this year.

Each member country in NATO needs to approve the accession of new members.

US Secretary of State Antony Blinken spoke of fears over potential for a nuclear accident in Ukraine. He told reporters late Monday that there are “credible reports” that Russia “is using the Zaporizhzhia nuclear station as the equivalent of a human shield, but a nuclear shield in the sense that it’s firing on Ukrainians from around the plant.”

The Russians have been firing from the cover of the Zaporizhzhia station since mid-July, Ukrainian military and civilian officials said, sending rockets over the river at Nikopol and other targets, in full knowledge that they will not receive counter-fire.

Alexander Ponomarenko “for operating or having operated in the aerospace sector of the Russian economy. He is an oligarch with close ties to other oligarchs and the construction of Vladimir Putin’s seaside palace.” He has been sanctioned by the UK, European Union, Canada, Australia and New Zealand.

Dmitry Pumpyanskiy “for operating or having operated in the financial services sector of the Russian Federation economy.” The UK, European Union and New Zealand have also sanctioned him. Pumpyanskiy has ties to the yacht “Axioma,” which is now being identified as blocked property.

Andrey Melnichenko “for operating or having operated in the financial services sector of the Russian Federation economy.” Like Pumpyanskiy, he has also been sanctioned by the UK, European Union, and New Zealand.

“We are also imposing additional costs on Russia’s war machine by designating 24 Russian defense and technology-related entities,” Blinken wrote in a statement.

“Russia has systematically focused on exploiting high-technology research and innovations to advance Moscow’s war-fighting capabilities – the same defense capabilities that Russia’s military is using in its vicious attacks hitting Ukraine’s population centers and resulting in the deaths of civilians, including children,” he added.

US President Joe Biden tweeted a photo of a call with his national security team in which they discussed ways to help Ukraine fight off Russia’s invasion.

“This morning, I held a secure phone call with my national security team. We discussed a wide range of priorities, including the United States’ support of a free and open Indo-Pacific and our continued support for Ukraine in response to Putin’s war,” Biden wrote in a tweet.

Earlier this week, Biden approved the 17th military package for Ukraine, bringing the US commitment to $8.8 billion since Russia invaded Ukraine.