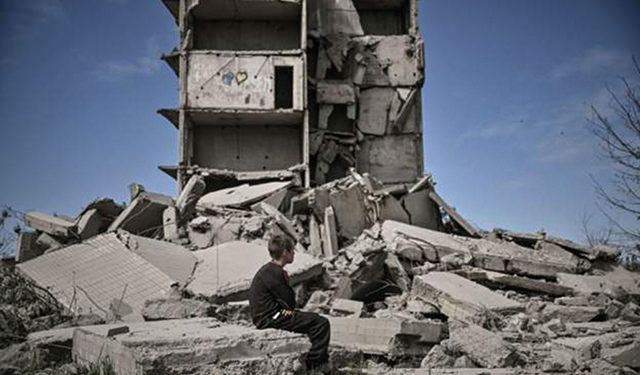 In the 12th week of Russia’s invasion of Ukraine, at the World Economic Forum in Davos, Volodymyr Zelensky called for continued pressure against Russia after its unprovoked war on his country.

In addition, a court in Kyiv convicted a Russian soldier, sentencing him to life in prison on Monday. Vadim Shishimarin, 21, a tank commander, was found guilty for killing a 62-year-old unarmed civilian in Ukraine’s northeastern Sumy region. Last week, Shishimarin pleaded guilty to the killing but said he was “acting on orders.”

The latest key developments in the third month of war include:
• The cities of Severodonetsk and Lysychansk in the Donbas region have come under constant bombardment as Russia tries to encircle them.
• Fighting has reached the outskirts of Severodonetsk, a key Russian target, but a senior Ukrainian official has denied reports that a vital road linking Ukrainian-controlled areas in the east has been blocked from the rest of the country by Russian forces.
• Russia said it will allow ships to carry food out of blockaded ports if sanctions are lifted. Ukraine is a major grain producer and the West accuses the Russian military of holding hostage food supplies for millions around the world.

• President Vladimir Putin has issued an order to simplify the procedure of handing Russian citizenship to residents of Zaporizhzhia and Kherson regions in Ukraine’s south. Ukraine called the plan “criminal” and a violation of international law.

Russia raises army age limit to 50
The Russian parliament has passed a law raising the age limit for people signing up to the army to 50.
It follows ongoing attempts by Russian officials to recruit more soldiers as Russian casualties in Ukraine mount.

Under current legislation, only Russians aged 18 to 40 and foreigners aged 18 to 30 can enlist as professional soldiers in the Russian military.

The Governor of Luhansk region described the numbers they were coming up against as “insane”. President Zelensky told ABC News his men were outnumbered 7-to-1 in the region.

The current Russian targets are the twin cities of Severodonetsk and Lysychansk.

A senior figure in eastern Ukraine has denied reports that a vital road linking Ukrainian-controlled areas in the east has been blocked from the rest of the country by Russian forces.

“Luhansk has not been cut off,” said the region’s military administration head, Serhiy Haidai. He said that while the route to the south-west of Severodonetsk had come under fire, humanitarian aid was still getting through.

“Fighting has reached the outskirts of the big city of Severodonetsk. If they capture the road to Bakhmut then the city could be surrounded. Within Severodonetsk, which is being shelled 24 hours a day, Russian forces are close enough to use mortar rounds as well as artillery and aerial bombing,” Haidai told the BBC.

Six people were killed in a Russian bombardment on Tuesday, he noted on his Telegram feed.
If Russia captures the neighboring town of Lysychansk, then the whole Luhansk region will be in its hands.

The Interfax news agency cited Russian Deputy Foreign Minister Andrei Rudenko as saying Moscow is ready to provide a humanitarian corridor for vessels carrying food to leave Ukraine, in return for the lifting of some sanctions.

Ukraine’s Black Sea ports have been blocked since the beginning of Russia’s invasion on 24 February. More than 20 million tons of grain is currently stuck in silos in the country.

Writing on Twitter, Kuleba said, “Any foreign politician or official who thinks of accepting this game should first visit the graves of the Ukrainian children and talk to their parents.”

Russia: Talk of prisoner swap ‘premature’
The fate of hundreds of Ukrainian fighters from the besieged steelworks in the southern city of Mariupol, who were taken to Russian-controlled areas last week, remains unclear.

It would be “premature” to consider a prisoner swap with Kyiv before Ukrainian soldiers who have surrendered stand trial, Russia’s deputy foreign minister said.

In comments reported by Russian news agency Interfax, Andrei Rudenko said Moscow would consider a prisoner swap with Kyiv after the Ukrainian fighters were “appropriately convicted and sentenced”.

“Before that, all talk of an exchange is premature,” he said.

It comes after Ukraine’s President Volodymyr Zelenskiy said late on Monday that Kyiv was ready for an exchange of prisoners and urged international allies to pressure Moscow.

The South: Zaporizhzhia being targeted
There have been Russian missile strikes on the southern city of Zaporizhzhia in what is being seen as the biggest attack on the city so far. At least one person has died and three others wounded.

The area is important because it is a major transport hub, especially for railways. It is also home to lots of heavy industry, including a steelworks and several defense companies, including the Motor Sich factory which makes engines for planes and helicopters, which the Russians claim to have hit, and a radar manufacturer.

Earlier in the conflict, many people from Mariupol made their way to the town which was, until now, thought to have been relatively safe.

Zaporizhzhia is also close to the site of a nuclear power station, Europe’s biggest, on the southern bank of the Dnieper River.

Russia eases citizenship rules for residents of southern Ukraine
President Vladimir Putin has issued an order to simplify the procedure of handing Russian citizenship to residents of the Zaporizhzhia and Kherson regions in Ukraine’s south.

Kherson is the first and only major Ukrainian city occupied by Russia.

Zaporizhzhia is still under Ukrainian control, but many surrounding areas are under Russian occupation.