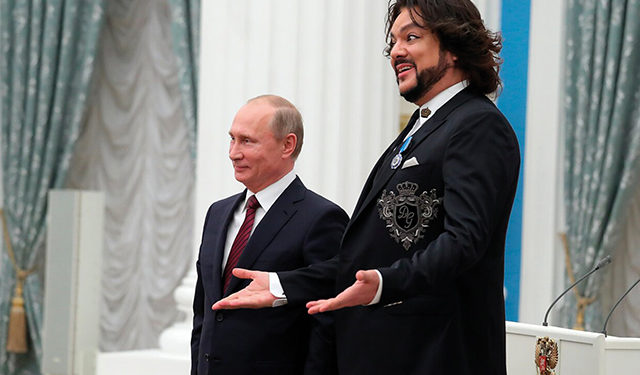 The Russian pop singer Philipp Kirkorov will not be able to perform or enter Lithuania for five years, after the country added him to its blacklist for supporting Moscow’s policies in Crimea. Indeed, this interview was supposed to be dedicated to his being put on said list, but, meanwhile, bigger things have happened – namely, Alexey Navalny’s arrest, which prompted mass uproar. The EU’s High Representative of the Union for Foreign Affairs and Security Policy, Josep Borrell, is set to fly to Moscow to meet Kremlin head honchos and advocate on Navalny’s behalf. Could it be another case of too little, too late for the EU? And, on the Kirkorov case, just how well does the West get Russian soft power? We spoke to Dr. Nerijus Maliukevicius, a lecturer and researcher at the Institute of International Relations and Political Science, Vilnius University, to pick his brains on these questions and more.
“What’s become evident is that the West labored under the illusion that the court’s decision would be lenient, or even that Navalny would be released then and there,” Maliukevicius tells us. “Which obviously proved not to be the case. And now the question of additional sanctions is back on the table again.
“While the EU is usually rather reluctant to embark on a path of sanctions and prefers to explore every other venue before resorting to them, once they are in place, they do take their toll, as we’ve seen so far in relation to Russia. How far they can go? Ideally, they could target Nord Stream II, but that would need Germany’s approval first. Alternatively, the West could consult the list that Navalny’s team had of the people involved in Navalny’s case.
“To put the icing on the cake, there are enough people in Navalny’s documentaries that have been outed as essential pillars of Putin’s support system in Russia. Targeting them would also underline the impact that Navalny’s work has.”

What do you think the Kremlin’s reaction will be? Will they cave in?
I think they, or specifically Putin, made a very calculated move regarding Navalny’s arrest. He is essentially a political hostage right now, and Putin will use him as a bargaining chip to negotiate with the West, all the while creating the impression of a reasonable man who’s willing to acquiesce to their demands. For example, as a new page, or reset of relations with the new Biden administration. Or he’ll trade Navalny’s release as a guarantee that the Nord Stream 2 project is kept alive and well.

Everyone in post-Soviet space knows who Philipp Kirkorov is. What was the public reaction when it came out?
Quite subdued compared to what it could have been had Kirkorov been sanctioned years ago. 10 years ago, it would have created a furor, mostly amongst sympathizers of Russian music, but now, we just have a few disappointed voices amongst Kirkorov sympathizers. But it’s not an issue. A real, harmful issue was his constant participation in Putin’s political agenda, and the formal issue was that he was a constant visitor to Crimea against Ukrainian law, and that is why this step was taken.

Does sanctioning Kirkorov raise the public’s awareness on why sanctions are necessary? On why there’s a need to deter Russia?
I agree that publicity of this move is enormous, and the argument brought forward to defend Kremlin-linked cultural figures is that one should not mix politics with culture. But this mantra is very easy to counter, in truth: Kirkorov and his like are exactly the people who started mixing politics and culture, who deliberately mixed the Kremlin’s politics with cultural activities. A short while ago, Kirkorov and some like-minded individuals wrote and released a supportive song for Lukashenko during the Belarusian protests. Basically, this move underlines the reality that culture and politics are not separate things in contemporary Russia, and that we must take adequate measures against such a tool of soft power: we simply cannot look the other way and ignore the activities of those who use cultural activities for the benefit of politics.

How potent an instrument is that in the Kremlin’s arsenal?
I would say it’s quite potent. It’s a tool to keep this symbolic, overarching Russian, or Russian-speaking, world together, and therefore it is quite extensively financed by the Russian state, including Russian state TV, and includes cultural activities, concerts that allude to a post-Soviet togetherness, this soviet nostalgia, and so on. It is a serious tool, and it runs contrary to our national security agenda.

Georgia has had to endure much more misfortune from the Kremlin than Lithuania since the 90s, yet people like Kirkorov, Luzhkov and their ilk can still safely visit, perform or conduct business. What would be your take on it?
You should really approach the issue of the soft power of Russia as a kind of gradual induction of communities and societies into this Russian world, Russian language world, into an information bubble which is later used very aggressively against the same communities, against the same societies. If those cultural figures, Putin’s cronies, are the ones that signed letters agreeing with the occupation of Crimea, agreeing with the aggression in Georgia, they are basically putting themselves on the list of personas non-grata, and that’s the way it should be seen. Similar precautions should be taken by the West in general, because as things stand, Russia commits all these atrocities in the neighborhood and nonetheless they expect to be treated with the principle of human rights, or by western business principles in the West. You cannot have both; you cannot be authoritarian and aggressive against your neighbors and then have ludicrous business projects in the West.

Does the same logic apply when performers or sportspeople from Georgia go to Russia? Should this be seen in a similar prism?
I would say what should be voiced quite publicly: consider the simple personal security risks for such actions, what could happen to the Georgian or Lithuanian artists who decide to go to Putin’s Russia. It’s also about ideological issues, how it will be perceived back home. In Putin’s Russia, everything is politics, and if you want to be on Russian state TV for the New Year’s Eve carnival, you simply have to be pro-Putin and pro-Crimea occupation, and so on.

And if you want to play in army-funded sports club CSKA, the smallest price you’ll have to pay is that you won’t be allowed to openly criticize the annexation of Crimea.
We no longer have clubs such as CSKA in Lithuania; we don’t have soviet-type sports clubs. But in Russia, nothing has changed since soviet times. It directly linked sports to army units, and then institutions. You have to realize it, and then see that this argument of not mixing politics with sports or music becomes absurd, because you are simply ignoring the Russian reality.