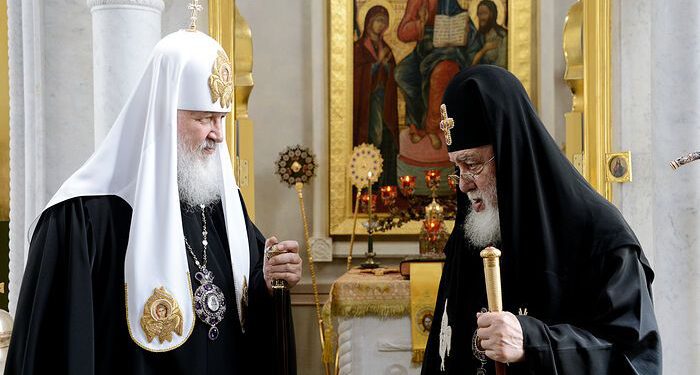 The Russian Church continues to recognize Abkhazia and South Ossetia as the canonical territory of the Georgian Orthodox Church and has not installed any bishops in either place, despite the recent claims of Patriarch Bartholomew of Constantinople, clarifies His Eminence Metropolitan Hilarion (Alfeyev) of Volokolamsk.

In an interview with the Georgian channel Formula News that was broadcast on Pascha, Patriarch Bartholomew spoke about the difficult ecclesiastical situation in Abkhazia and South Ossetia, including a number of accusations against the Russian Church.

“The Moscow Patriarchate has no right to grant autocephaly not only to Abkhazia, but also to anyone in general,” Pat. Bartholomew added.

It is true that the Georgian Church has at times been upset about the activity of Russian priests in Abkhazia and South Ossetia, as recently as the feast of Nativity this year, although, due to political tensions, Georgian clergy are forbidden from entering and serving in either territory, which has created a situation where the Orthodox faithful must either attend services with a Russian priest or with schismatic priests.

However, the Russian Church has continually stressed that it recognizes the Georgian Church’s jurisdiction and it makes no claim to be able to grant autocephaly in Abkhazia, despite the accusation of Pat. Bartholomew and pro-Constantinople outlets in Georgia.

It is also true that the Georgian Church has been upset with Constantinople lately. At its session in February, the Holy Synod specifically discussed the fact that Pat. Bartholomew ordained a Georgian deacon to the priesthood in July 2020 without the blessing of the Georgian Church. A Synodal commission is currently studying the matter.

In fact, Met. Hilarion points out, it’s Constantinople that claims this authority for itself, though history shows otherwise. “For example, the autocephaly of the ancient Georgian Church was granted by the Patriarchate of Antioch,” His Eminence notes.

“Abkhazia and South Ossetia are recognized as the canonical territories of the Georgian Patriarchate, and the Russian Church has never disputed this,” he continued.

This stance has been voiced by His Holiness Patriarch Kirill many times, including during discussions with His Holiness Patriarch-Catholicos Ilia of Georgia at the Kiev Caves Lavra in 2011. “We value the position of the Russian Orthodox Church, which has said more than once that it recognizes the jurisdiction of the Georgian Orthodox Church in these regions,” Pat. Ilia said in 2016.

In his interview, Pat. Bartholomew made another bizarre claim. Referring again to the situation in Abkhazia and South Ossetia, he said: “Even, as far as I know, Moscow has its own bishop, and it is happy with the situation.”

Asked where Pat. Bartholomew might have gotten such information, Met. Hilarion responded: “From incompetent advisors, perhaps?”

“If Patriarch Bartholomew really said that, it’s a delusion,” the Russian hierarch continued. “The Russian Church has no bishop in either Abkhazia or South Ossetia,” he clarified.

“We have long noticed that the Patriarchate of Constantinople is sometimes poorly informed—for example, on the Ukrainian question,” Met. Hilarion continued.

There is, for example, the well-known case of Makary Maletich, the former primate of the UAOC, which has proven embarrassing for Constantinople. On October 11, 2018, the Holy Synod of the Patriarchate of Constantinople resolved to “reinstate” Maletich and Philaret Denisenko (the head of the schismatic KP) “to their hierarchical or priestly rank.”

However, Maletich was received by Constantinople as the Metropolitan of Lviv, though it is well known in Ukraine and Russia that he was only a married archpriest when he was a member of the canonical Church, being consecrated as a “bishop” of the UAOC only 7 years after he left the canonical Ukrainian Church.

His Grace Bishop Irinej of Bačka, one of the most authoritative hierarchs of the Serbian Orthodox Church today, has called on Pat. Bartholomew to admit his mistake and acknowledge that he was the victim of schismatic misinformation concerning Ukraine and revoke the OCU’s tomos of autocephaly.