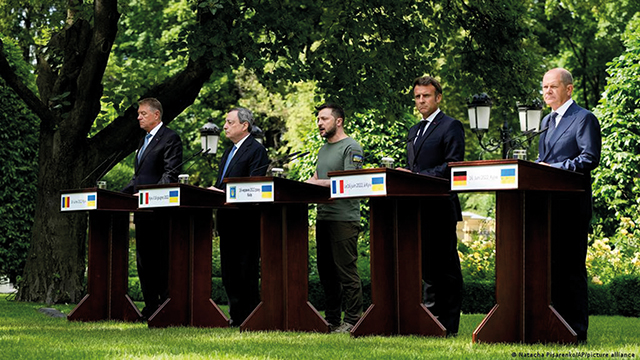 Europe is already looking towards a post-war rebuild of Ukraine. Source: DW

Key updates of week 16 include:
• An adviser to Ukraine’s President Zelensky says the battles for Severodonetsk and Lysychansk are entering a “sort of fearful climax”.
• Luhansk Governor Serhiy Haidai says Russian forces took two more villages near Lysychansk.
• Russia claims it has Ukraine’s troops surrounded south of the city.
• The EU made a historic offer of candidacy status to Ukraine at a summit that started Thursday.

The cities of Severodonetsk and Lysychansk, Ukraine’s two footholds in the eastern Luhansk region, are the sites of “hellish battles” against Russia, regional governor Serhiy Haidai said. Moscow’s forces are gathering near a village south of Lysychansk that was captured this week, he said, in a possible attempt to cut off the remaining defenses there.

Russian missile attacks continued to hit the rest of Ukraine, with strikes reported near Kharkiv in the north and Mykolaiv in the south.

Updates from across the country

Severodonetsk: “Hellish battles” are ongoing in Severodonetsk, where Russia has been eyeing control. Taking the city is one of Russia’s key aims as it would mean they control almost all of the Luhansk region.
The Mayor of Severodonetsk says up to 8,000 people remain in his city. The British Defense Ministry said Wednesday that Russia is pushing toward enveloping the city from the north via Izyum and the south via Popasna.

Lysychansk: The city of Lysychansk is “constantly suffering from enemy fire,” Luhansk’s Haidai said on Telegram. The Institute for the Study of War said Russian forces had advanced toward the city, among the few Ukrainian toeholds in Luhansk, from the south, calling the advance a “clear setback” for Ukraine. Russia will likely reach Lysychansk in the coming days, the Institute forecast, and the city is bracing itself.

Kharkiv: Heavy shelling continued on Wednesday across the Kharkiv oblast, the northeastern province that borders Donbas, Oleg Synegubov, the regional governor, said. At least 10 civilians were killed in strikes on three villages and towns, and another 10 were wounded. Local leaders expect a prolonged fight with Moscow’s troops there, as they battle to keep Ukrainian forces from advancing closer to the Russian border.

Southeastern Ukraine: Petro Andryushchenko, an adviser to the Mayor of Mariupol, said large convoys of Russian military equipment were traveling toward Berdyansk and Polohy in Ukraine’s southeast Zaporizhzhia region.

The Black Sea: Ukraine’s military claimed that it launched airstrikes Tuesday on the Russian-occupied Snake Island in the Black Sea, saying it inflicted “significant losses.” The Russian military said its air defenses “destroyed all enemy weapons” as Ukraine made “another crazy attempt” to claim the island. Satellite images released by US firm Maxar Technologies appeared to strengthen Ukraine’s claims rather than Russia’s.

EU Candidacy and Looking Ahead

Heads of state and government meeting in Brussels for a two-day European Council summit on Thursday backed candidacy for Ukraine and Moldova but asked both countries to meet certain conditions before they move on to the next steps.

Though candidate status does not confer membership, Ukrainian and EU diplomats say Thursday’s decision marks a historic step and sends an important signal to Russia.

The Kremlin falsely claims that Ukraine is “not a real country” and wants to bring it into Russia’s sphere of influence by force. A pathway to membership in the EU sends the message that Ukraine is a very real country with a future of its choosing, diplomats said.

German Chancellor Olaf Scholz on Wednesday said Ukraine would need significant economic aid to rebuild, similar to the US initiative providing foreign aid to Western Europe after World War II.
Speaking to the German Parliament, Scholz said the Group of Seven countries this month would discuss for Ukraine its own Marshall Plan, the name given to the multibillion-dollar assistance program deployed by the US in postwar Europe. Scholz added that images from Ukraine reminded him of those from Germany in the aftermath of World War II.

Some supporters of Ukraine, who had previously been critical of Germany for its slow weapons deliveries, argued that Scholz should focus on helping Kyiv defeat Moscow before contemplating the postwar rebuild.

The Defense Department’s Office of Inspector General will scrutinize the degree to which the Pentagon has planned to restock weapons and ammunition it is providing Ukraine. The US military has provided billions of dollars in arms to Kyiv as it fights off a Russian invasion.

Since Russia invaded Ukraine on Feb. 24, the United States has provided $5.6 billion in security assistance to Kyiv, including $1 billion pledged last week.