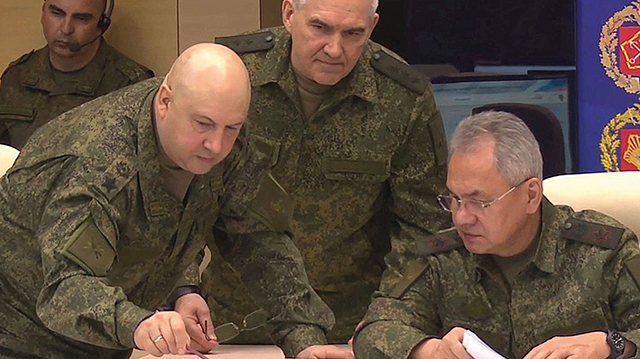 The popular 1988 song “Мы Уходим!”, in English meaning “we’re leaving,” by the Russian band Kaskad is a classic that references the Soviet withdrawal from Afghanistan. After a brutal 9-year war, the Kremlin’s troops were forced to abandon the Middle Eastern country with little to show for their bloody struggle. It is also a succinct framing of the Kremlin’s recent announcement to leave the only regional capitol they have captured since the launch of their “special military operation” in Ukraine.

On the evening of November 9, a status meeting was held between General Sergey Surovikin, supreme commander of all Russian and pro-Russian forces involved in the “Special Military Operation” in Ukraine, and the Minister of Defense Sergei Shoigu. While Surovikin explained that the situation was “stable” on the front, he also conceded that things were not tenable in the southern front. After his presentation, the two senior officers agreed to the decision to withdraw their forces from the Kherson city and the right bank of the Dnipro River in Ukraine and fortify their positions on the left bank.

“Kherson cannot be fully supplied and function. Russia did everything possible to ensure the evacuation of the inhabitants of Kherson. Kyiv strikes at the Kakhovskaya hydroelectric power station and creates a threat of flooding of vast territories,” Surovikin said. “It is proposed to take up defensive positions along the left bank of the Dnieper. Keeping a grouping of troops on the right bank is futile.”

According to Surovikin, the Ukrainian troops continue to attack schools, hospitals and civilians in Kherson, who have been evacuated to the other Dnieper bank. Due to the circumstances and problems with the supply of Kherson, the general claims, and the adjacent settlements on the right bank of the Dnieper, it is advisable to organize the defense on the left bank of the river. This decision will preserve the combat capacity of the troops, he insists.

According to Sergei Shoigu, the defense in Kherson’s direction is stable, but “there are its own peculiarities.” He also agreed with the decision to proceed with the withdrawal of the troops, and the task will reportedly be completed as soon as possible. The two general officers agree to their belief that Kyiv plans to destroy the Kakhovka Hydroelectric Power Plant and flood the Dnieper’s surrounding areas, which they say represents a great threat to the Russian army and its people in the region.

Surovikin claimed that from August to October, Ukraine lost more than 9,500 soldiers, including over 300 “foreign mercenaries.” The losses of the Russian army, he states, are 7 to 8 times less than the losses of the Ukrainian army. Despite this, more than 115,000 will be instructed to leave the area following the order to withdraw. Surovikin says other areas on the front are stable, and claims some areas are targets for small offensives.

It is most likely that the retreat to the left bank of the Dnieper is real, and not a feint as some online have speculated. It is not impossible that Russia may stage a great ruse to engulf the Ukrainian troops, but the situation may not allow for such an opportunity. As such, the key item to watch for is the way the withdrawal is conducted.

Many of these units have not been rotated out in a long time, and, as Surovikin stated, have been partially or mostly cut off from consistent resupply. Ukraine has launched a long streak of both successful and unsuccessful assaults on Russian positions. Regardless of their outcome from the Ukrainian side, on the Russian side they are sapping supplies, morale, and manpower.

The Russian command has had several days, if not weeks, to plan this withdrawal and left bank fortification operation. If this is done in a coordinated and organized manner, this will show a very different side than what was witnessed during the haphazard route in Kharkiv. It may also indicate a reform in organizational command structure and morale.

Additionally, a sharp eye should be kept on what attacks Russia will launch to cover up this event. The Kremlin will already have a very difficult time spinning this to be palatable by the Russian public. Massive missile, drone, or another significant offensive (less likely) must be done to wash out the press feed and keep the populace supportive of the “special military operation” in Ukraine.

While what exactly will happen is unknown, Russia’s way of war is telling. The narrative to the Russian people, the finger-pointing in the Kremlin, and the white-washing of the withdrawal should all be closely observed. This is likely the largest Russian retreat in years, if not decades, and as such, the ripples of it will resonate in the military, political, and likely the social spheres.