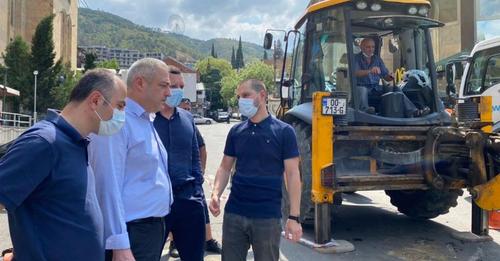 Part of a road has collapsed near Rustaveli Avenue. No-one was injured in the incident.

“On Rustaveli Avenue, a 600-millimeter water pipe burst, which caused damage to the roadway. Restoration works are already underway, equipment is mobilized. Due to the works and considering that the damage is to a drinking water pipe, the water supply will be limited to a certain part of the population of Mtatsminda district. Here, in addition to the GWP pipe, there are also communications from other provider companies,” stated the deputy mayor, Irakli Bendeliani.

He noted the area will be fully put in order as soon as possible and the traffic flow will be restored.