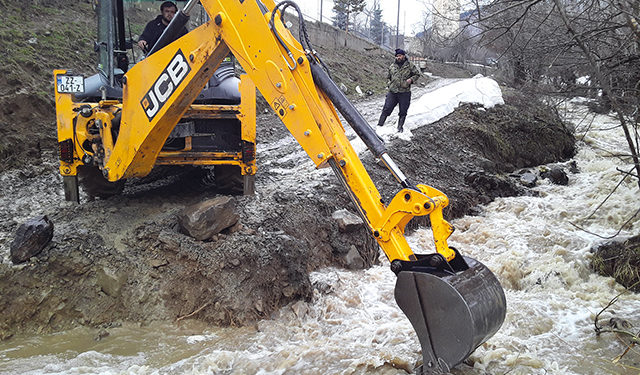 One of my self-set tasks at home in winter and into spring is to use a shovel to divert running meltwater off the road which runs past our house, giving it short channels to the nearby river and preventing it from eroding deep gullies along the road. Having kept a set of such channels running nicely for some weeks (with daily maintenance to undo tire damage from cars), I was rather surprised recently to find all my work having been undone, overlaid by heavy machine tracks and a stone/silt mixture, obliterated. I walked up the road to investigate.

As I ascended, I heard what I assumed must be thunder several times, and looked for the lightning which must accompany it. But the weather was all wrong, and so was my reasoning. What I was actually hearing, getting louder as I neared the river, was its fury smashing unseen rocks against each other. Other people in the village had heard this too, so it wasn’t just me. One had lost a bull, swept away by the flood. Several homes had had their basements inundated. Elsewhere the same river had also cut across the main Zugdidi-Mestia road inside our village, but this at least was less a local matter, more a provincial one, and was quickly dealt with. At home, we had had to dig a channel through earth and inches-thick snow-turned-ice to divert our own flow of water away from the house and down to the fields it usually washes over in spring. Our little river is only a hand’s width wide, but it has been flowing steadily for a few days now, clearly necessary.

More and more chaos, impossible for one person with a shovel to reorder. Up, up I went… and near the house of the president of Toyota in Georgia, I found what was going on.

An unseasonably large amount of snow fell on us in February and March, this followed by warmer temperatures and rain. So a big melt was underway, much more water running downhill towards the Enguri River than usual; enough that our little river had overflowed even the large concrete pipe laid to take it under the road. The several hamlets of Etseri above this point, starting with Barshi, were cut off, forced to use a secondary road in considerably worse repair than the usual one.

A group of about 15 men was at the pipe, now invisible under the massive flow of water. A large wheeled digger was busy excavating the clayey and rocky soil to try to restore the road, but the sheer volume of water was making this quite a challenge. It seemed that we would have to wait for the weather to improve, the flow to diminish enough to stop overwhelming the pipe, before normalcy could be reestablished. Meanwhile, a furious shouting match in Svan was going on between two of the men, who were being restrained by two others from lunging at each other to make it physical. Likely a disagreement over procedure, which had then disintegrated into insult and rage. I took a few photos and some video for posterity.

A couple of days later was my next opportunity to hear the repair progress. In the meantime, we had seen an even larger excavator being driven to the scene on the back of a big flatbed truck, presumably to save fuel. It has now done its job, and the road is back to usable. I know that this is on a small scale, as far as time and effect go, compared to what a river can do when it overflows. But it is a sobering reminder of the power of nature to bring chaos. Rain here (even in Ushguli!) in January, leading to the trees starting disastrously to bud far too early; now this. It also reminds me to be as prepared as possible against the possibility of being cut off from the rest of lower Georgia in general… which also has happened before.