Rally ‘Georgia Without Oligarchic Rule’ To Be Held on June 24 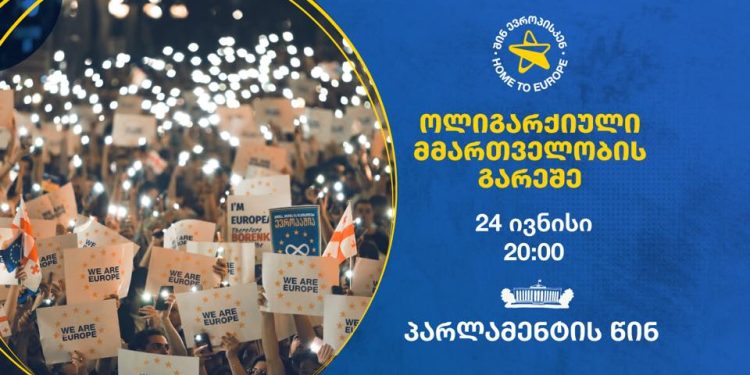 On June 24, the European Council will announce the final decision on Georgia’s candidacy. After the decision is made public, citizens of Georgia will again gather in front of the Parliament on Rustaveli Avenue and make a request to the government.

The rally, the main motto of which is ‘Georgia Without Oligarchic Rule!’ is organized by the Shame Movement.

“No matter what decision the European Council makes, Georgia will have 6 months to fulfill its obligations.

“No matter what promise the government makes, we do not believe they will be faithful to their word, because, for years, their loyalty has only been proved to the oligarch. They violated the promise made to the Georgian people when the draft law on the proportional electoral system was dropped, and they violated the promise given to Europe when they sabotaged the agreement reached with the participation of the President of the European Council, Charles Michel. Therefore, we, the Georgian people, must take responsibility for the implementation of reforms.

“This process started with an unprecedented rally on June 20, which turned out to be historic – the will of Bidzina Ivanishvili and the Georgian people was separated, which was clearly seen by the world. Nevertheless, we have no means of self-satisfaction – the Georgian people must defend the European choice of Georgia. That is why, on June 24, we will announce the demands for the de-oligarchization of Georgia and inform you of our action plan.

“We are contacted by ordinary patriotic people and organizations of Georgia, who express their desire to join the people’s movement. On June 24, you will see and get acquainted with a wide union of such people, which will lead Georgia to Europe.

“Home to Europe!,” announced the organizer of the rally, Shame Movement.

The creation of a new people’s movement was announced at the rally in front of the Parliament of Georgia on June 20, which was attended by at least 120 000 and up to 160,000 demonstrators demanding the country’s European future.