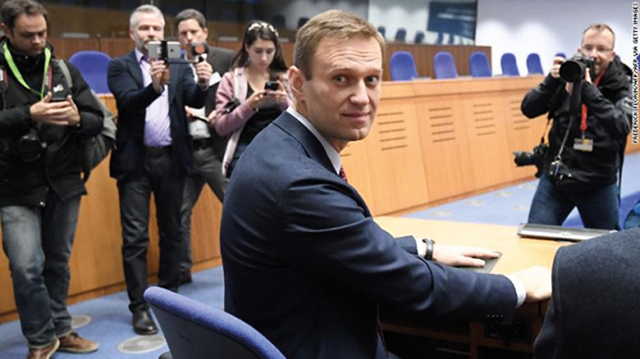 Russian opposition leader Alexei Navalny, during his February 2 trial, again accused Russian President Vladimir Putin of attacking him with novichok poison, and unrightfully prosecuting him.
“I inflicted deadly resentment on him by surviving with the help of good people, pilots, and doctors; by not hiding behind a security guard in a bunker; and then something even more horrible happened – I took part in an investigation into my own poisoning, showed and proved that Putin carried out EFSB, ‘An attack to kill me,'” Alexei Navalny told the court on Tuesday. He also denounced Putin as “Putin the Poisoner.”
The court had to determine whether real custody should be replaced by probation in the old case, which is widely regarded as politically motivated. Throughout the hearing, the Kremlin critic ridiculed the claims that he broke his parole while 5 months in recovery from being poisoned.
The world is outraged by Navalny’s arrest, which was followed by protests by tens of thousands of people across Russia on Sunday – the largest anti-government protests in a decade. Among the people detained during Sunday’s protests was Navalny’s wife Yulia. Navalny joked as she waved at him in the courtroom: “I saw you on TV in my cell. They say that you are constantly violating public order. Bad girl! But I’m proud of you.”
“I’m going to continue to fight. I’m going to continue to fight you. I’m not going to fear you,” the opposition leader told Judge Natalia Repnikova in Moscow City Court.
“This is not a demonstration of strength. It is a demonstration of weakness,” said Navalny, stating that Russians will not be scared off because of his trial.
The independent watchdog OVD-Info reported that more than a hundred people had been arrested near the courthouse and nearby streets.
After a few hours of consideration, the court decided to send Navalny to prison for more than two and a half years.