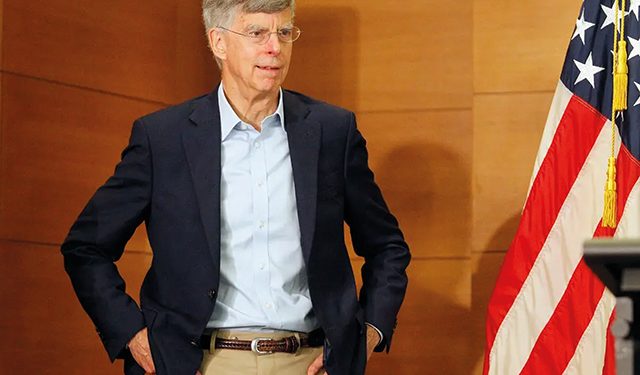 An ambassador to Ukraine under three different presidents, Former US Ambassador to Ukraine William Taylor, attendee of the McCain Institute, George W. Bush Institute and the Economic Policy Research Center 2022 Tbilisi Conference on September 5-6*, spoke to Radio Free Europe’s Georgian Service about how Russia’s war has changed the shape of Ukraine and Ukrainians as a nation.

“I served in Ukraine twice,” he says. “The first time was in 2006-2009. Even then, there were arguments from political parties on both sides. One side would argue that Russia was the model that they wanted to go towards, the other side argued that ‘no, it’s Europe that we want.’ It was a legitimate debate.

“In 2014, when Russians tried to annex Crimea and invaded Donbas, that began the real change, the real unification. It drove Ukrainians together into realizing more and more that Russians are not their brothers, that the Russians are actually invading, and killing Ukrainians. In 2022, this horrible invasion by Russia crystallized all that had been going on.

Putin has created on his border a hostile nation that will remain hostile for generations – he didn’t consider Ukraine a nation at all, and that’s his major blunder

“I have been struck by the hatred that Ukrainians now have for Russians, not just Putin. Putin has created on his border a hostile nation that will remain hostile for generations – he didn’t consider Ukraine a nation at all, and that’s his major blunder. The nation that he didn’t think was there has resisted him, has kicked him back out of their capital. How could he make that mistake? I don’t understand it. But he has now learned that Ukraine is indeed a nation, and it is defending itself. It is now not even a debate about NATO or the EU: There’s virtually no-one in Ukraine who wants to follow the ‘Russian model.’ So it has changed things dramatically.”

In an earlier interview, you claimed there was a race between the West providing weaponry and Russia strengthening its territorial gains. Over a month on, is the race still on? And if it is, who is ahead?
It’s still ongoing. There are races going on in men, material and morale. The Ukrainians continue to have volunteers coming in, men and women, and they have to turn people away, because they want people with some military experience. On the Russian side, they may now be recruiting prisoners. They’re trying for Libyans, Syrians, North Koreans, the private sector of the Wagner Group. Wagner is trying to hire people into their group to go and fight in Ukraine. The Russians are having a hard time. Recruitments are way down. And now President Putin has just said he wants more, he’s going to increase the size of the military, he says, because the he can’t get the work done with the people he’s got already. But mobilization will create a political backlash against him and against his regime, could even destabilize his regime. So on the men, I would say the Ukrainians have the edge. The race on material – The Russians have constraints there, too. The Western nations that are a broad coalition that United States has led – Europeans, Canadians, Japanese, South Korea and Australia, New Zealand, others, that coalition is denying Russia the components of their weapons. There’s an export ban on the different microchips and components that the Russians use in their weapons systems. They are now short of them. And they’ve used 70-80% of the precision-guided munitions that they started out with. So they’re now having to go with dumb bombs artillery that is indiscriminate, not precise. The weapons that the Ukrainians are now getting from the United States, from the Germans, Brits, Poles, are getting stronger, longer, more capable.

We’ve seen a turning point with these weapons, with HIMARS, that has had a real effect. Is it decisive? We don’t know yet. But what we do know is that the weapons that are coming into Ukraine are going up. And that’s part of that race. The last point in that race is morale. The Ukrainians clearly have the edge on morale. And the Russian soldiers, some don’t even know why they’re there.

How sensible do you consider it to have the approach, “we will wait out Russia until it runs out of ammunition?”
We won’t do it. It’s not a sensible approach, we won’t wait until they run out of ammunition, because they have tons and tons and tons of old ammunition and weapons, older tanks that they’ve had in store that they’ve dusted off and cranked up again. And Russia has a lot of soldiers, a lot of young men they can recruit. They’ve got 140 million people, and Ukraine has 40 million. So in the long term, waiting is not a good strategy. The Ukrainians are now pushing for a breakthrough, and are at least taking back some portion of the South. It may not be a breakthrough, it may be gradual, it may be a slog. But the Ukrainians have been very smart on their military strategy.

You said “Putin doesn’t get to choose” when to sit for talks, that he’ll have to back down and retreat. And that begs the question, how dangerous it is leaving Putin with no choice but to retreat?
There are people who say that we have to give Putin a way out, off-ramp, a way to save face. Some European leaders have said we shouldn’t humiliate him. I believe the way to make Putin stop this war is for the Ukrainians to win on the ground, and the United States and NATO need to provide the Ukrainians with the weapons and the ammunition to be able to do so. When the Ukrainians push the Russians back, maybe to the line that existed on February 23, maybe farther, but when they are pushed back…

Is that a ‘when’ or an ‘if’?
I think it’s a when – I believe in the Ukrainians, for the reasons we talked about earlier, but it may take time. The Russian military is stretched already so they may run into big problems in the South. They may lose a lot of their soldiers on the western side of the river in Kherson, where those bridges that they used to travel or resupply have been knocked out. If those 25,000 Russian soldiers on the western side of the Dnieper River and Kherson are captured, that could be a trigger for a collapse. It could have a domino effect that could lead to a sudden collapse and then Mr. Putin’s options are to talk. He may say, ‘no, actually, I would like to talk to the USA.’ But President Zelensky has said that he is not interested in talking until they are out.

Many also think that Russia cannot allow itself to be defeated here. If we were to put equation marks somewhere, where do we put them? Russian defeat equals the collapse of the Russian state, Russian defeat equals the collapse and removal of Putin?
It’s a very good question, one I don’t know the answer to. What I do know is that when the Ukrainians push the Russians back, when Putin has to make a decision about negotiations, when he wants to come to the table after he has been defeated, pushed way back on the battlefield, when that happens, the dynamics will change in Moscow, in the Kremlin; the dynamics may change across Russia. The Russian people may conclude that they were lied to – this actually was a war, not a “special military operation.”

Do you think they genuinely believe that?
No, I don’t think so. But like other people around the world, it’s easier for them to just go along with it, so as not to have to face the music, even if they know that the music is bad for them. There is oppression, the security forces, the police, the internal pressure on anyone who says that this is actually a war. You go to jail in Russia for saying it’s a war. But do they know it? Of course, they know it. But they’re not saying it out loud.

If those 25,000 Russian soldiers on the western side of the Dnieper River and Kherson are captured, it could trigger a collapse

Speaking of collapses, a man who contributed immensely to the collapse of the predecessor of the modern Russian state passed away last week. The walls that the West asked Gorbachev to tear down – has Putin rebuilt them? Are they even higher today?
He’s built walls to essentially keep Russians in. He’s tried to wall Russia off from the world, and he glories in it, and he wants to maintain Russia being able to feed itself, to prosper without contact with the West. Peter the Great opened up Russia to Europe, and President Putin has closed the window for Russia that Peter opened. Those walls that President Reagan demanded Gorbachev tear down, President Putin has built up again. And those walls are very high.

But the location has changed.
Right. The wall is now on Russia’s borders, it moved east. What happens to the nations on the western side of that wall? They’re not in Russia. Ukraine is a good example and so is Georgia. And we know where Ukraine wants to go. We know where Moldova wants to go. Those countries in that gray area have to decide where they want to go. We know that Mr. Putin thinks that Russia is really in charge of, owns, dominates, Ukraine, because Ukraine is “not a real nation,” so he thinks that the wall should be there. But the Ukrainians disagree.

It’s hard to make up your mind or decide your future when somebody is using your land to build a ditch around his fortress. It’s not so easy for Georgia, Ukraine and Moldova.
It doesn’t happen quickly, but it can happen. Of course, Georgia, Ukraine, Moldova are at different stages, and can make decisions on their own. But it certainly can happen.

* This year’s international conference “Slava Ukraini”, hosted in Tbilisi, focused on Ukraine. Experts, leaders and policymakers from the United States and Europe held high-level discussions about Ukraine and Georgia, the future of NATO and the EU, and democracy in general, given ongoing Russian military aggression and disinformation.