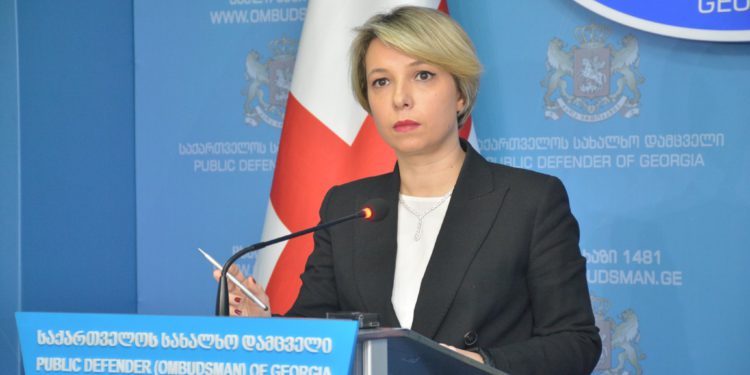 Public Defender Nino Lomjaria has responded to the protest of the population of the village of Shukruti in Chiatura Municipality.

The Public Defender’s Office states that from the very first days, the Public Defender has been monitoring the events developing in the village of Shukruti, Chiatura municipality, where locals demand fair compensation for the property damaged by the ore mining works carried out by the Georgian Manganese Ltd. The affected citizens also demand the involvement of the State in the process.

Rallies have ongoing for 105 days, while for more than 20 days some of the protesters have resorted to an extreme form of protest – sewing their lips shut and going on hunger strike.

For the purpose of studying the issue, representatives of the Public Defender met with the protesters on the ground and listened to their demands. They also have constant contact with the rally organizers.

“For the purpose of discussing the protesters’ demands with representatives of the company, on May 31, the Public Defender’s representatives communicated with a representative of ‘Georgian Manganese,’ who said that the company had assessed the property of the affected residents of Shukruti on the basis of the market prices,” – reads the statement released by the Public Defender’s Office. “In addition, according to him, compensation does not mean deprivation of the right to own and use the property. According to the company representative, contracts are being signed with the population in stages, taking into account the degree of damage.

“In addition to the fact that the protesters distrust the evaluations made by the company and demand that the amount of compensation be determined by the Levan Samkharauli Forensics Bureau, the methodology of property valuation is also disputed between the parties. As we have learned, the special manager of the company publicly stated that the company was ready to apply to the Levan Samkharauli Forensics Bureau to evaluate the amount of losses. In addition, the population demands that the obligation and terms of paying the compensation by the company be specified in the relevant contract.

“Given the difficult situation, the Public Defender of Georgia calls on the Ministry of Economy and Sustainable Development to engage in the negotiations between the Shukruti population and the company as a mediator in order to protect the citizens’ property rights and allow them to live in a healthy environment.

“The Public Defender continues to study the case in the context of the right to live in a healthy environment, as well as the alleged pressure exerted on one of the protesters.”