President: Russian Aggression has Not Stopped Georgia’s Move Towards Europe 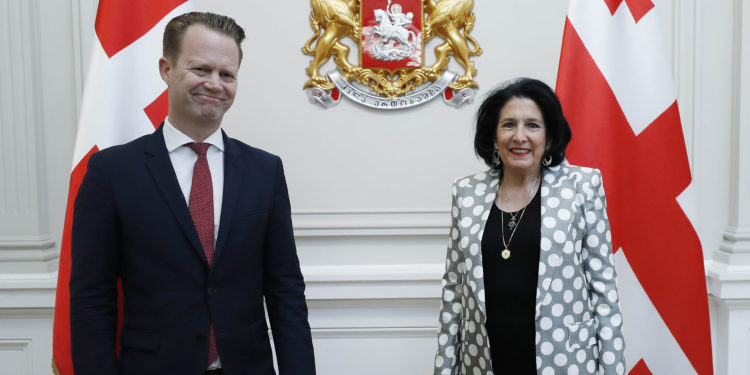 Russian aggression has not stopped Georgia’s move towards Europe and the newly created “window of opportunity” is the EU’s right response to this aggression, Georgian President Salome Zurabishvili said today during a meeting with Danish Foreign Minister Jeppe Kofod at the Orbeliani Palace.

Presidential Administration reports that the discussion focused on the ongoing conflict in Ukraine, the occupied territories of Georgia, the situation in the region, the security of the Black Sea, Georgia’s EU accession process, bilateral relations and the role of small countries in addressing global challenges.

The Minister of Foreign Affairs of the Kingdom of Denmark reiterated his full support for Georgia’s territorial integrity, sovereignty and European integration, and stated that Georgia is a European country with a place in the European family.

Speaking about the occupied territories of Georgia, the President of Georgia highlighted the importance of the activities of the European Union Monitoring Mission and the expansion of its working area.

“In order to promote stability in the region, it is important that the Black Sea is not a sea of ​​confrontation, but a sea of ​​stability and unity, and that large-scale projects, including infrastructure projects, are being implemented around it,” the President was quoted as saying.

The Administration reports that the Kingdom of Denmark appreciates Georgia’s support for international resolutions on Ukraine.

Earlier today, the Danish Foreign Minister, who is paying an official visit to Georgia, met with the Vice Prime Minister of Georgia/Minister of Foreign Affairs, David Zalkaliani.