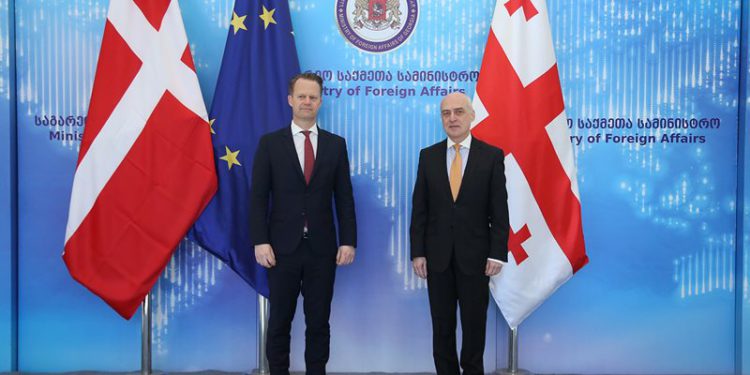 At the meeting, the sides discussed important issues on the agenda of bilateral relations between Georgia and the Kingdom of Denmark, including Georgia’s decision to make a formal application for EU membership. Discussions also focused on the security challenges in the region. The Georgian Foreign Minister thanked his Danish counterpart for his visit to Georgia and for his unwavering support for Georgia’s European and Euro-Atlantic aspirations.

Zalkaliani highlighted that 2022 marks the 30th anniversary of the establishment of diplomatic relations between Georgia and the Kingdom of Denmark, and stressed the importance of this date. The sides also spoke about the results achieved over the past three decades and focused on the successful cooperation established under the Danish Neighborhood Program. The Ministers discussed the prospects for strengthening economic relations between Georgia and Denmark.

The ministers condemned proposed “referendum” in the occupied Tskhinvali Region over “unification” with Russia. As David Zalkaliani notes, it is unacceptable to discuss any referendum while Georgia’s territory is occupied by Russia. Yeppe Kofod, for his part, reaffirmed his strong support for Georgia’s sovereignty and territorial integrity within its internationally recognized borders.

“Today, when the occupied Tskhinvali region plans to hold a referendum, we stand with Georgia,” Jeppe Kofod said.

As the Danish Foreign Minister notes, when very dangerous authoritarianism is rising in the world and Russia is waging a war against Ukraine, and Russian troops are still stationed in the occupied territories of Georgia, the West strongly supports Georgia and all countries that adhere to international rules and values. “We have to stop Russia. Democratic countries and the democratic world stands together,” Jeppe Kofod said.