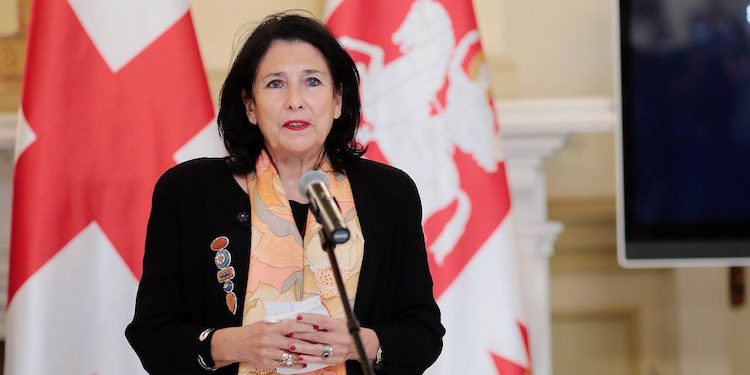 “We offer you the chance to gather in Rike Park from Europe Square on June 16, all of us, to see each other and to show Europe ourselves, our unity,” Georgian President Salome Zurabishvili said at a briefing.

She noted that everyone should gather on June 16 as a sign that “we want Europe for our children, for the next generation.”

“There will be no speeches, no posters, no statements. If anyone can sing, they can sing. We will just stand to show that we want Europe for our children, for our future generation,” said Salome Zurabishvili.

At the same time, she called on the EU Ambassador and the ambassadors of the EU member states to join the June 16 event.

“We will all gather in Europe Square on June 16, at 7:00 pm, for one hour, no more is needed and you will not be bothered,” said the President.

At the same time, she called on the organizers of another rally, the Shame Movement, to cancel the demonstration scheduled for June 20 on Rustaveli Avenue, “to avoid any incidents,” to which the organizers publicly replied: “No and never!.”

“It is contradictory that President Salome Zurabishvili, who calls on the civil society for consolidation for European integration, announces an alternative rally and offers the organizers of the June 20 rally to cancel the long-announced gathering,” Shame Movement representatives wrote on social media.
“No and never! We accept the President’s invitation to the June 16 rally and offer that she, too, accepts an invitation from self-organized civil society groups and attends the “Home to Europe” rally, which begins at Parliament on June 20 at 8 PM and ends at the Europe Square.
“In a country where we celebrate the New Year twice, nothing will hurt if we celebrate our commitment to European integration twice as well,” they noted.
Member of the ‘For Georgia’ party, Mikheil Daushvili announced that the ‘For Georgia’ party will not take part in the rallies scheduled for June 16 or 20.
“Until June 24, the number one task for us is to work with our partners, which we do daily, which we did during our visit to Brussels. Today, our main task is to convince our partners that Georgia should get the candidate status and then continue the process of European integration,” he said.
Irakli Kobakhidze said the Georgian Dream will also not take part in the rally announced by the President for June 16.
“We need to separate ourselves from an unprepared rally. This is not a serious initiative,” he said.
German Ambassador to Georgia Hubert Knirsch, said that he would be going to Europe Square tomorrow.

“The President of Georgia, Mrs. Salome Zurabishvili, invited people to Europe Square on June 16, at 19:00 to support Georgia’s European future. It is noteworthy that the head of state calls on her citizens to publicly express their position on Europe,” noted the Ambassador.